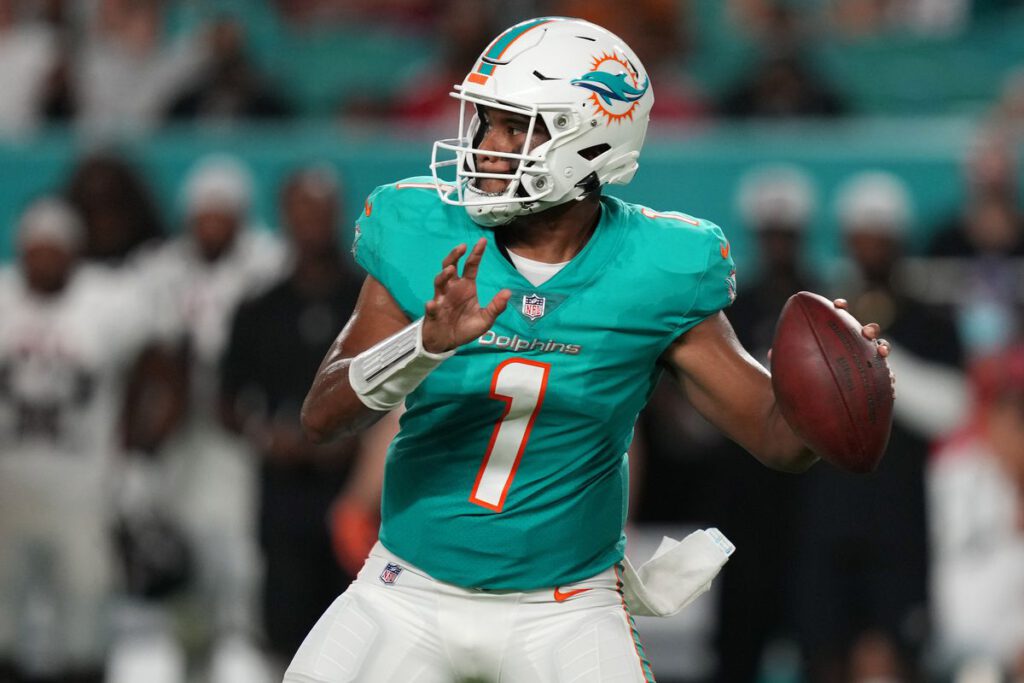 We’ve been spoiled as NFL fans this season with the amount of top tier, closely matched primetime games there have been – and Thursday night was no different. If the Arizona-Green Bay game from Thursday is any indication of the way this week will go, then we’re in for a good one this Sunday.

Here are my three games to keep an eye on this weekend, with game odds and my predictions powered by BetOnline.ag:

The Miami Dolphins have been in the headlines this week, none of which relate to their 1-6 record on the field. According to reports, the Dolphins are the front runners to land Houston Texans quarterback Deshaun Watson in a deal before next weeks trade deadline.

Miami themselves have been quiet about the rumors. On Friday, head coach Brian Flores reiterated to the media, “Tua Tagovailoa is our starter”.

Here's how it all went down. The video tells you more than just quotes. pic.twitter.com/6GzRn37pWY

The Bills meanwhile have been red hot and are 4-1 since their week one loss to the Steelers. Josh Allen continues to prove to doubters (which used to be me), that he is franchise quarterback. After losing to the Titans 34-31 two weeks ago, Buffalo will come out hungry this Sunday.

The Watson rumor mill will once again prove to be too much for Miami to overcome. Buffalo will come out swinging off their bye week and get a win at home. Bills win big.

This AFC South divisional matchup has a lot riding on it. After starting 0-3, the Colts have won three out of their last four games and Carson Wentz looks as good as he did in 2017. Running back Jonathan Taylor is second in the NFL in rushing, and Darius Leonard is holding the defense together allowing just 21.3 PPG.

On the other side however, is the NFL’s leading rusher – by nearly 300 yards – Derrick Henry. Henry is averaging 4.6 yard per carry this season and has shown no signs of slowing down, rushing for over 100 yards in six out of eight games this season. Meanwhile, quarterback Ryan Tannehill continues to do just enough from a signal caller standpoint to allow the Titans to win games.

Both of these teams look to have the firepower to win this division, and the result of this game could end up meaning a lot come playoff time.

I’m sure the books see this as a let down spot for Tennessee. They’ve beat the cream of the crop in the NFL over the last two weeks, and now sit as underdogs against the 3-4 Colts. It’s a chalky pick, but I’m taking the Titans with the points. I think they win outright.

Tom Brady is back in my games to watch this week as he continues to defy father time. The Bucs beat down yet another team last weekend, winning 38-3 against rookie Justin Fields and the Chicago Bears. Tampa will be without WR Antonio Brown for the second straight week, but should have no problem filling in for him with the guys they have in the room. Brown continues to be simply an added bonus for the loaded Bucs offense.

The Saints come into Sunday at 4-2 but despite the winning record, don’t have their offense in any type of rhythm. Jameis Winston and the New Orleans barely beat the Russell Wilson-less Seahawks on Monday night, putting up just 13 points against what has been a terrible defense.

The Saints will have to put up a lot of points on Sunday to compete, and I don’t see that happening after what we saw on Monday night. You can’t bet against the Bucs right now. Bucs win and cover.