Patriots Mailbag: What Will Pats Offense Look Like With Mac Jones as the Starter? 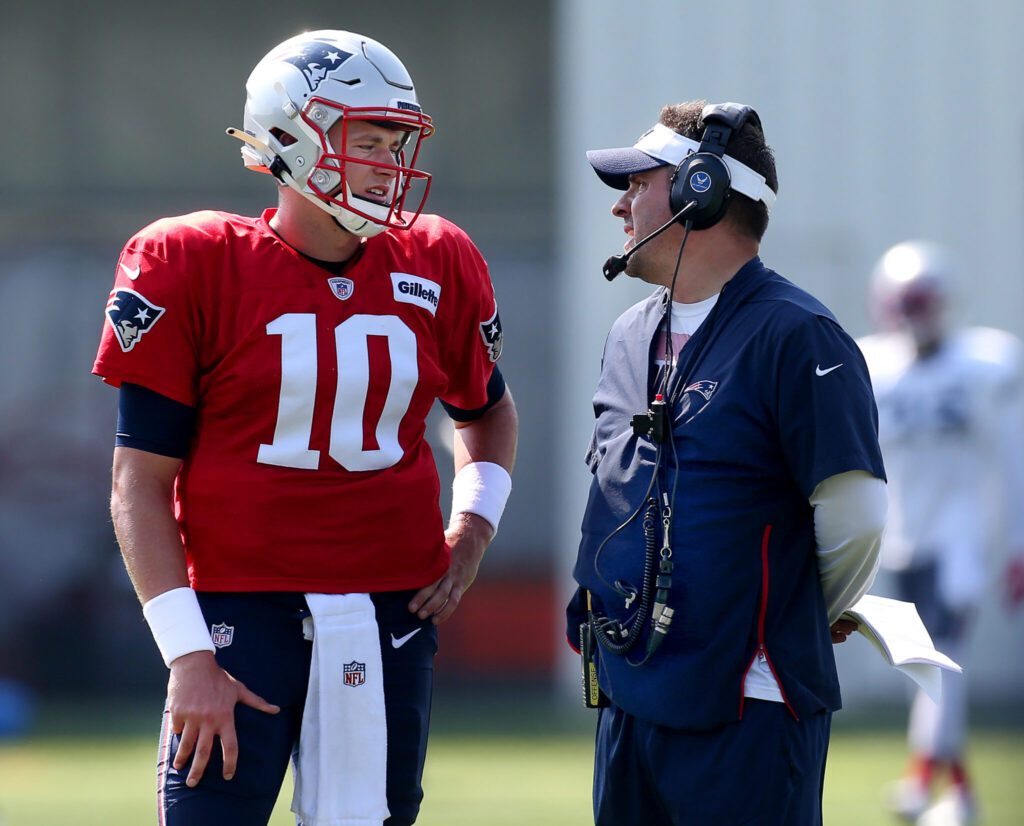 The Mac Jones era in New England will begin when the Patriots kickoff against the Miami Dolphins in Sunday’s season-opener at Gillette Stadium.

Although Jones’s 59 preseason drop-backs gave us a glimpse into a Mac-led offense, we are stating the obvious by saying offensive coordinator Josh McDaniels held back in the preseason.

The preseason is mostly vanilla and doesn’t show their entire vision for the season, so what will the Mac-attack look like in Week 1?

Another obvious statement is that the Pats are a game plan team that tailors their scheme each week to their opponent, but even a Belichick-coached bunch has tendencies and a foundation.

With Jones, we saw a few of those foundational elements in August, such as operating in the quick-game and out of empty formations. In the preseason, nearly 38 percent of Jones’s passes came out in less than 2.5 seconds. He also ran 14 of his 59 drop-backs out of empty.

However, multiple trends will undoubtedly change. First, the Pats didn’t play a snap with Hunter Henry and Jonnu Smith on the field together this summer due to Henry’s shoulder injury. 12-personnel will be a significant part of New England’s offense this season, and it’ll be fascinating to see how the spacing with Henry, Smith, and Jakobi Meyers works itself out.

“I’m going to survive and adjust. Adapt to whatever it is,” Meyers told CLNS Media this week. “ I feel it’s been pretty smooth right now. We have some great coaches. Josh [McDaniels] is always going to find ways to use his weapons the best he can.”

Second, Jones, who ran tons of play-action and RPOs at Alabama, only ran play-action on 20.3% of his preseason drop-backs. The Pats rookie was terrific off play-action, averaging 12.4 yards per attempt with an adjusted completion percentage of 91.7. His play-action frequency should skyrocket in the regular season, especially with the introduction of two-tight end sets.

Plus, just 26.2% of Jones’s drop-backs were from under center, which should increase a bit.

And lastly, more motion, a lot more motion. The Patriots only utilized pre-snap motion on 29.9% of their plays on offense in the preseason (23rd). That followed a trend from last year where New England ranked 15th in pre-snap motion with Newton as the starter (48%). In Tom Brady’s final season in 2019, the Pats were third, using motion on 64.4% of their offensive plays.

The theory here is that the Patriots will run most of the core passing concepts we saw in the preseason but out of different formations and with more window dressing.

Utilizing their two tight ends to out-formation defenses, more play-action and RPOs, and a return to the Brady-era frequency of pre-snap motion to give Jones coverage indicators and help receivers gain leverage on defenders (Jones did a lot of these things at Alabama, too).

The beauty of having two talented tight ends that can catch the ball and block is that McDaniels can run any formation out of the same personnel grouping (12).

New England can be a smash-mouth team with Henry and Smith inside the formation. They can spread the defense out by detaching one or both tight ends and morph on the fly.

You put base defense out there? Let’s go empty. Nickel or dime package? We’ll run it down your throats. We saw this for 20 years with Brady, where the GOAT would have two play calls and check into the right one based on the defense at the line of scrimmage.

And, no, the Patriots won’t hold Jones back from throwing the football if those are the looks he gets from the defense; let it fly, kid.

The Pats’ flexibility as an offense returns to its usual form. Yes, the accuracy and quick release are nice. But the volume that Mac handles so well is what makes McDaniels’s scheme go.

Without further ado, here’s the Week 1 edition of our Patriots mailbag:

How concerned are you about Mac's ability to make it through the season from a physical perspective? Stacked O-line should help, but he doesn't carry a lot of beef.

I’m not surprised that the local talking heads are concerned about Jones’s durability. He didn’t come into the NFL as a workout warrior with an NFL body, but I’m told that Jones is on the right path with a much stricter diet and obviously an NFL workout plan. I’m not concerned about Jones making it through the season healthy and think his risk of injury is the same as any player, which is to say they are all at risk of injury. Oh, and the knee? A minor issue that won’t limit him. Chalk this one up to looking for a knock on the kid.

How much do you think the 12 days off focused on helping acclimate Mac to what BB thinks Flores will bring in terms of amoeba fronts, pre-snap reads, coverage disguises, post-snap adjustments, etc… Have they focused more on basic offensive FUNCTIONS or on the kitchen sink?

We are in regular-season mode now at practice. The days of running what the Patriots call “basic” are over. They’re installing a game plan and repping it against the scout-team defense who is mimicking the opponent. So, yes, Mac saw amoeba fronts, zero blitzes, and disguised looks all week.

Who do you think will be Mac's go-to guy this season?

On the one hand, I fully expect Jakobi Meyers to eat between the numbers in this offense. Defenses will game plan for the tight ends and the running game, leaving Meyers in single coverage a lot. On the other hand, Mac’s quick decision-making screams for a huge James White year. I also fully expect White’s production to creep closer to his years with Brady as Mac’s go-to on third downs and safety valve. White on option routes against linebackers all year long.

With Mills possibly don‘t playing in week 1 do you think there is a huge role for Shaun Wade?Or do you think someone like Myles Bryant steps up instead?

It’s not trending in a good direction for Jalen Mills, who hurt his ankle in practice on Wednesday. If Mills can’t go, you have to look at the healthy wide receivers for Miami. We know Parker and Waddle will be out there. But who will be the third guy? If it’s mostly Albert Wilson and Jakeem Grant, it makes more sense to elevate Myles Bryant if they can. Those guys are more in the Waddle mold as players who are good in space. If 6-foot-5 wideout Preston Williams is healthy, then Joejuan Williams or Wade would be the answer. Is the third receiver a speed guy (Wilson, Grant) or a big body? That’ll dictate New England’s personnel in the secondary.

If Agholor is out, could you see Wilkerson getting promoted to fill his role or do you feel they'd try to do so with the others on the 53 man roster? I've read and heard local media members stating Dugger would/should cover Miami's tight ends but wasn't Phillips better in camp?

The Patriots are really, really slow at wide receiver if Agholor can’t play. Although Wilkerson could get the call-up and brings some quickness, it seems unlikely that he’ll get playing time over Meyers and Bourne. A skill group of Meyers, Bourne, Henry, Smith, and White isn’t winning many foot races. With that said, Wilkerson’s status also depends on what the Patriots do at kicker. You can only elevate two players from the practice squad, and Brian Hoyer is an automatic. If they have to promote Folk, there goes Wilkersons’s spot.

We do this every week, and my answer hasn’t changed; the Patriots aren’t making any moves at wide receiver until at least the trade deadline. They spent a combined $77.5 million guaranteed on pass-catchers this offseason and want to see what this group looks like first before making another major move. Could they bring a guy like John Brown in for a workout? Maybe, but a source says there’s nothing on the books with Brown. Brandin Cooks? I don’t see that happening right now either. They’re rolling with what they have until at least the deadline.

Is JJ Taylor the next Pats pass catching back after White leaves or is he more of the Dion Lewis role type?

My original answer to this question was that Taylor was the successor to James White in the pass-catching back role. However, running backs coach Ivan Fears offered a different view. Fears said, “last year, we wouldn’t have thrown him in the passing game to save his ass.” Whether it’s routes, protections, or all of the above, the Pats coaches are more on board with Taylor as a runner than a receiver. That could change, but it doesn’t seem like Taylor will have a huge role in the passing game yet. Expect Taylor to factor in as a kick returner, though.

With all the attention paid to Mac and the D, what is your sense on the Special Teams this year? Poised for a bit of a bounce back? Who returns kicks for us? Please don't say Bolden…

Last season, the Pats had the top-rated special teams unit in Football Outsiders’ DVOA metric, and I would expect them to rank very high again unless the kicker situation crumbles. Still, in terms of coverage units, returns, and punting, the Patriots should be a top unit again.

How much of a leash does Nordin have?

Based on Belichick’s answer to ESPN’s Mike Reiss on Friday, I fully expect Nick Folk to be elevated from the practice squad and kick in Sunday’s opener. Here is a snippet of Belichick’s response to Reiss’s question on possibly elevating Folk, “I think there’s a lot of merit to it. That’s why he’s on the practice squad…so yeah, there’s certainly more flexibility.”

Do you think Stephon Gilmore and the Patriots would reach common ground and renew the contract?

There’s nothing new to report on Gilmore’s contract situation. But the expectation is that the two sides come to an agreement, or already have an agreement, that gets Gilmore on the field when he’s fully healthy.