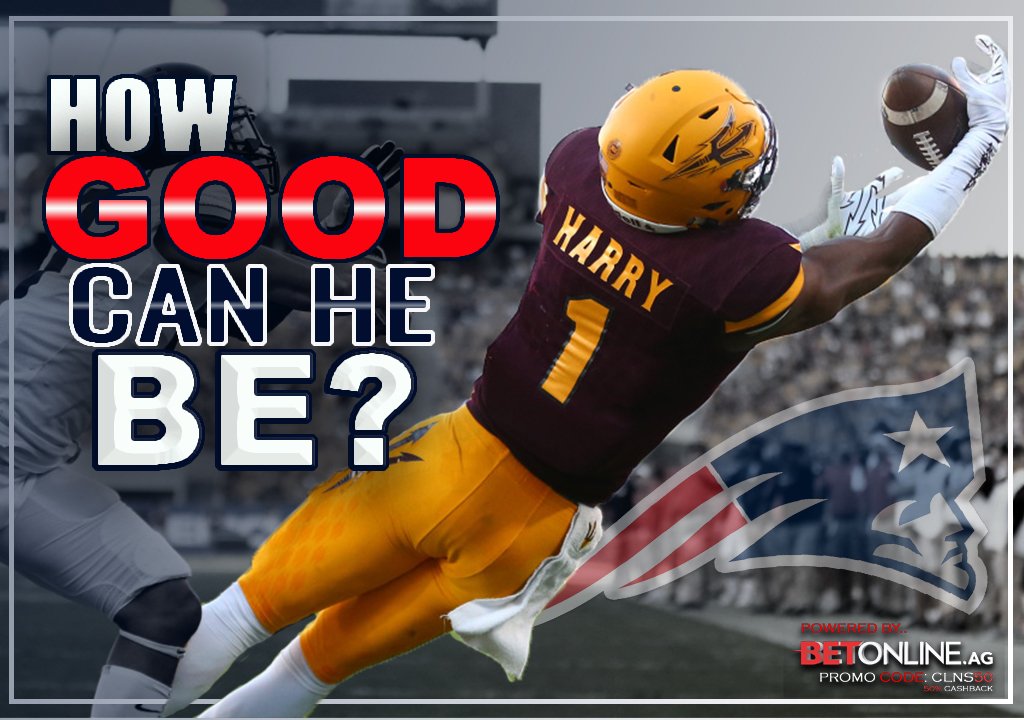 Fisher has over 30 years of coaching experience. He has coached quarterbacks at Penn State under Bill O’Brien and NFL wide receivers such as Torry Holt, Earl Bennett and Koren Robinson.

I spoke to Fisher about the Patriots newest receiver and what to expect.

The audio of the full interview is in the link below.

What were your first impressions of N’Keal?

“When you first meet him, physically, he’s an imposing man. He’s a big, strong, physical kid. Doesn’t take you long to figure out who N’Keal Harry is when they talked about him when I took the job. Big smile. Very engaging young man. Very well thought of in the valley. He grew up here in the desert and went to high school here, Chandler High School, and of course had a decorated career at Arizona State. Tremendously respected. A guy that stayed at home to play; the people in Tempe and the greater Phoenix area appreciate that and respect that in him. It was really cool that a guy would do that because he had options to go anywhere in the country. Maybe the most heavily recruited High School receiver of his class three years ago.”

What stands out about N’Keal on the field?

“Obviously, his physical size is one thing. For a big kid, he’s got great feet. He’s really got tremendous feet. I always look at big receivers and if they have the ability to put their feet in the ground and if they’re light on their feet. When you watch tape of him, he can make you miss. He’s got the make you miss factor for a big receiver, a lot of guys don’t have that at his size, they’re more straight-line guys, but he does have the ability when the ball is in his hands to make you miss; that’s what sets him apart from a lot of the other big receivers, and then he’s got strong hands. He can come down with the contested catch, contort his body, and make tough and difficult catches. If you want to call it a 50-50 ball with N’Keal it’s probably more like 90-10. Highly competitive, wants to do well, likes to work and wants to be his best at practice. If he doesn’t do it right or thinks he can do it better, he’ll compete to do it better. That’s a trait of all the really good ones.”

You’ve been coaching for a long time, have you seen a lot of guys at his size that can make you miss in a phone booth as much as he can? To me, he’s pretty unique.

“Well, not at his size. There are guys that have a make you miss factor, but most of them aren’t that big. I’ve been around many good ones that have that factor, but not generally that size. The sang I like to use is can he come alive when the ball hits his hands? And that’s the thing you notice about N’Keal; he comes alive. If you watch the run against Utah, the run against Texas-San Antonio, he’s got really good open field speed. He’s got what I call competitive speed. Timing him in a 40 is one thing, but watching him run on the football field when the ball is in his hands, and he comes alive, he’s got a competitive speed, and I think that’s a different type of speed. Then you’re dealing with a guy that’s 228 pounds, and you have to try and tackle that.”

On a defining moment of N’Keal’s last season:

“There’s two plays against USC that stick out to me. We had lost a couple in a row, we had a tough loss to Colorado, and we needed a win, and we needed to go on the road to get it. Over the years, Arizona State on the road at USC hasn’t had a lot of success. I think USC was on a 20-something odd game winning streak at home. We go in there and jump on them right away we are up maybe 24-3, N’Keal had a big touchdown catch early in the game. They come back, they wake up and roar back to take the lead, and we need a play to stem the tide. He caught a punt inside the ten, and you’re saying ‘don’t, no,’ and he reverses field and out-runs them all down the sidelines for 92 yards. We needed a play, and that’s what great players do.

Then late in that game we are trying to protect the lead, preserve the lead and go down and put the game away and that’s when he makes that highlight reel catch that almost everyone has seen when he contorted his body against press coverage on a one-on-one fade ball and caught the ball one-handed…those are the things I remember about guys like him. I had Torry Holt at N.C. State, Koren Robinson and Earl Bennett at Vanderbilt and they make those plays when they need to be made. He’s a very competitive kid, and the big stage doesn’t bother him.”

One of the biggest questions in New England is will he be able to get on the same page as Tom Brady, and it’s a complicated offense that the Patriots run, how are his football IQ and his ability to absorb the playbook?

“He’s a very bright kid. He has a nice football acumen. I think all kids have a learning curve as far as preparation. I think that’s one of those big steps: going from college player to pro. It’s a full-time job you know they aren’t in chemistry and other classes, it’s a big adjustment for any college player. From an intelligence standpoint that’s not going to be [an issue], he’s a very bright kid. Having been in the Patriots’ system, it’s very complex. It will be a really good challenge for N’Keal as it would be for any young rookie and just like it was for our guys at Penn State when O.B. [Bill O’Brien] came in there. But he has all the learning ability and all the skills to get all that. I think it’s more a matter of getting in the building, getting with their coaches and the day-by-day install; he has all the ability to learn. He can talk football with you, he understands football, but with any young player there’s a learning curve.”

What kind of routes did N’Keal run in the Arizona State offense? Were there a lot of option routes?

“There are some, yeah. If you watch us throughout the year, we started to move him more inside. He ran a good amount of inside routes. People are like ‘well, is he inside or outside,’ certainly he can play both, he moved all over the place for us. Not a ton of option routes but certainly he has an awareness of that has been presented those things and we ran some option routes and things like that. His thing is more tremendous downfield catch guy, digs, shallows [crossers] and crossing routes and he’s made a lot of big plays on those types of things. Made a lot of big plays on verticals and certainly the one-on-one matchups on the outside.”

What position did N’Keal play in the Arizona State offense? Was he lined up mostly as the “X” receiver?

“Well, it’s both because in a no-huddle depending on the hash you are on he could’ve been the X or the Z certainly in college football because you know the hashes aren’t in the middle of the field, so that makes it the strength either right or left. He ended up being either the X or the Z. He was pretty much always on the left or right though this past year we made a big adjustment with him and really moved him around even in a no-huddle scheme. He was really exposed to moving all over the place, probably as much, I mean we did that a ton in my past with Earl Bennett, we did it a lot with [Torry] Holt and with any high-level receiver you have to because otherwise you’re just asking them to be able to find him easily. Then about halfway through the year we really decided to move him that much more inside and get some of those matchups, and he made some big plays inside for us.”

Is there a part of N’Keal’s game that is underrated? I think most know about the contested catches and the elusiveness.

“Well, right off the bat when he gets locked onto you blocking now he’ll kill you. When he gets a guy, and he gets him under control because all those smaller corners kind of want to dodge him and out-quick him and all that stuff. When you’re in a no-huddle offense, there’s no break your going and going and going so they all try to dodge him and make him miss because he’s out there on the field all the time. But let me tell you when he gets locked on them, and he gets his hands on them, he can move you now. He’s got some competitive strength, some natural playing strength as I like to say. When you say underrated, though, I don’t think a lot of people realize how gifted with the ball in his hands he is for a big kid.”

“The guy he reminds me of, though he’s faster, is Anquan Boldin. He’s got that kind of body, that kind of strength, that kind of power. Anquan could play inside and outside and had a good natural feel for the game. Coach [Herm] Edwards felt like he reminded him of Dez Bryant, that’s a fair comparison. To me, just his game and the way he plays, a few months ago when people asked me that: Anquan Boldin. A guy whose body is built to go the distance. He can take the punishment, he can play inside, he can play outside for you and he’s got strong hands. Anquan’s 40 time wasn’t as fast as N’Keal’s, but he had that competitive speed and then he had a natural ability to make you miss and make plays, and that’s what the great ones have, and N’Keal has that.”