Patriots Season Preview: How the Patriots Defense Can Live Up To Hype 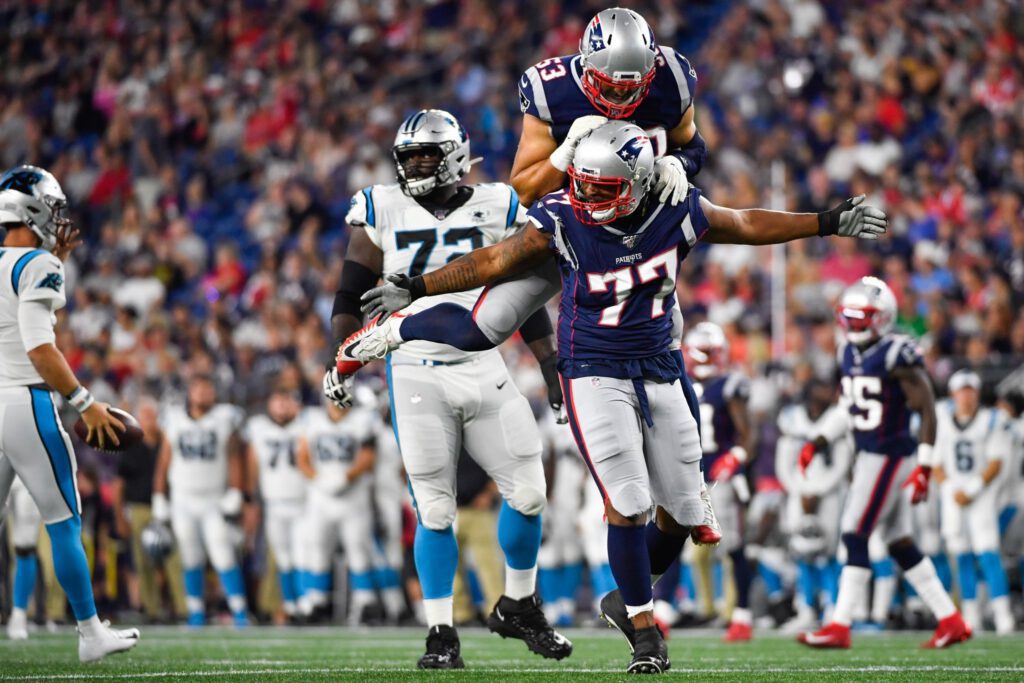 FOXBORO — There are high expectations for the Patriots defense this season after an excellent postseason led to a sixth Lombardi Trophy.

Patriots head coach Bill Belichick leaned on a talented veteran unit a year ago to start dialing up aggressive pressures with his typically excellent coverage plans.

The Patriots defense was dictating the terms to the offense rather than reading and reacting like in the “bend don’t break” years of the past.

During training camp, we saw the waves of talent that Belichick has at all three levels of his defense, giving him the multiplicity to do whatever he wants.

The Patriots lost their best front seven player a year ago, Trey Flowers, to free agency, but they’ve replaced him with three-time Pro Bowler Michael Bennett, and added everywhere else.

Since we are all excited about this defense, let’s try to theorize how will Belichick will unleash the New England defensive personnel:

Training camp is when you install your core concepts that you’ll use all season, and that’s when the Patriots started practicing as a 3-4 or 3-3-5 base defense.

Last season, the Patriots’ base nickel formation was a 4-2-5 formation accounting for 30 percent of their defensive snaps. The next closest front was a 3-3-5 or 3-2-6 with a ten percent dropoff in frequency.

Although it’s a notable switch, it’s important to remember that the Patriots will continue to rotate through multiple fronts, after all, 30 percent still leaves another 70 percent.

As far as how the personnel will be deployed, we’ll see how the year goes, but on Sunday night the top early-down defensive line will likely be Michael Bennett (DE), Danny Shelton (NT) and Lawrence Guy (DE).

Plus, the Pats will also have rookie Chase Winovich, John Simon and Shilique Calhoun as edge rushers, mostly in passing situations.

And other defensive linemen such as Adam Butler, Deatrich Wise and rookie Byron Cowart will be in the mix as well.

The combinations that Belichick uses in the front seven will be fascinating.

After the third preseason game, I wrote a column and film breakdown on the snapshot we got of the Patriots’ starting defense.

Even though the schemes were simple, the aggressiveness was still there as the Patriots put fewer players in coverage to attack the quarterback or at least threaten to do so.

On third downs last season, the Patriots unleashed their playground defense as well as a variety of blitz packages that used safeties and linebackers as pass-rushing threats.

The best way to explain what the Patriots did, and will hopefully continue to do, is to show you.

Above is an audio breakdown of one of my favorite simulated pressures from the Patriots last season.

Although Belichick and Brian Flores dialed up some terrific pressure schemes a year ago, the entire league had a whole offseason to watch what they did on tape.

Several teams probably watched the Patriots defense to copy them, but Belichick will need some fresh ideas to keep offenses off-balance.

The best player on the Patriots defense the entire summer was All-Pro cornerback Stephon Gilmore.

Gilmore is a joy to watch in practice. He has perfected his craft playing with patience, physicality, body control and athleticism shutting down every receiver lined up across from him.

Earlier this summer, Gilmore told me that he wants to play with “no panic” crediting his improved patience at the line of scrimmage as well as film study for his All-Pro season.

Last season, Gilmore was among the league leaders in every major category and was the highest-rated cornerback in the NFL by Pro Football Focus (90.9).

If training camp was any indication, Gilmore will have another shutdown season in 2019.

HOW WILL THE PATRIOTS USE MICHAEL BENNETT?

The big offseason addition on the defensive side of the ball is former Seahawks and Eagles standout Michael Bennett.

Although Bennett will turn 34 years old this season, he’s still an upper-tier player at his position.

During the summer, the Patriots lined Bennett up between the tackles, everywhere from shaded over the tackle to rushing over the center.

Flowers was a great player and a perfect fit in the scheme, but it looks like it’ll be as simple as Bennett in, Flowers out for the Patriots.

PENETRATING NOSE TACKLES ON THE HORIZON?

Another potential carryover from Super Bowl 53 is a more aggressive approach from the interior defensive line.

The game plan against the Rams was to get vertical, or upfield, to shut down Los Angeles’s wide zone rushing attack.

In the preseason, we saw glimpses of that attacking strategy from nose tackle Danny Shelton, and he acknowledged the new technique.

“It’s just part of being in this kind of system and being coached by Bill [Belichick]. You have to be ready for a new technique or a new defense at any time. I’m excited because I’m anxious to learn and become a better player,” Shelton told me.

With Shelton and others blowing up things in the middle, the Patriots’ defensive front will give opposing offensive lines even more problems.

With a Bill Belichick coached team, you can never forget about special teams.

The Patriots have a new punter, a potential new punt returner and one of the best groups of special teams aces in the NFL.

Here’s a quick preview of the special teams unit that’ll hopefully get back to its dominant-self this season:

The Patriots drafted a punter in the fifth round, and then he unseated a near-Super Bowl MVP in Ryan Allen with a spectacular camp.

Bailey struggled with consistency at times, but everyone was in awe watching the ball come off his foot, and it was clear that he had a different type of leg than Allen.

The final nail in Allen’s coffin was a 67-yard free-kick followed up by a 54-yard bomb out of his own end zone by Bailey in the second preseason game.

Bill Belichick knew he couldn’t get his hands on Johnny Hekker, but he wanted a “weapon” of his own at punter, and he might’ve found one with Bailey.

READY FOR THE GUNNER SHOW ON RETURNS?

Patriots undrafted rookie Gunner Olszewski had one of the wildest cutdown day experiences you’ll ever see.

The Patriots informed Olszewski of his release at 11 a.m. on Saturday but traded cornerback Keion Crossen to Houston right before the deadline. Belichick then called Olszewski to tell him he made the team.

Olszewski is on the team, at least for this week, so the question now is will he be the teams’ primary punt and kick returner?

Olszewski showed a natural ability for punt returns with great vision and burst to become a potential difference-maker, and that’s how he made the roster.

Gunner was okay on kick returns, and certainly could be a net-positive in that role, but he’s more likely to return punts than kicks in my opinion.

On punt returns, he can give the Patriots something, and preserve Julian Edelman for a long season ahead.

The Patriots cleaned up the field goal operation in the preseason finale with Gostkowski nailing kicks from 51, 40 and 31 yards with Bailey in place as his new holder.

Although I understand the concerns about the 35-year-old, Gostkowski is still well above replacement level, especially when you take into consideration the weather conditions in Foxboro.

Until there’s a viable replacement on the open market, Gostkowski offers them the type of consistency that teams like the Chicago Bears could only dream of having.