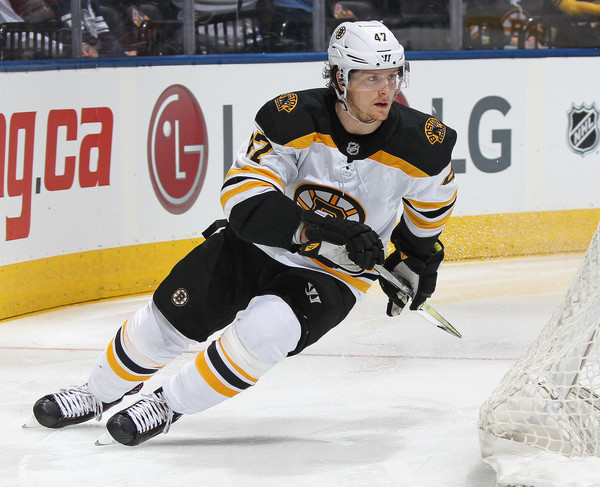 He knew the question was coming. It’s been the biggest story surrounding the defenseman since the calendar flipped to 2019-20. He would surely have been asked about it at least once or twice over the past few weeks had the NHL still been playing games.

With Krug set to be an unrestricted free agent this offseason, Tuesday afternoon was the chance to ask how the talks have progressed since COVID-19 shut the league down.

“We haven’t had any talks since this thing has started,” Krug said. “I can’t speak for any other UFA that’s in a position like I am, but in terms of my situation here in Boston, we haven’t continued any talks or made any progress in that regard.”

That’s not the most ideal news for either side. However, it’s a bit understandable the Bruins and Krug haven’t yet had discussions since the season was put on pause.

We’re in a pandemic. Nobody knows how to handle this situation. Both sides have families to tend to during these unprecedented times. The focus of the Bruins, as well as the rest of the NHL, is on when they return to play.

The future of Krug in Boston appears to be on the back-burner.

“For me personally, I really hope I did not play my last game as a Boston Bruin,” Krug said. “It’s been a special place for me and my family to grow. My love for the game and playing in front of these fans — it’s been very special to me. [This situation] hasn’t given any clarity. If anything it’s made me wonder about this process a little bit more.”

He even later listed some of the day-to-day things he misses about his team, such as seeing what outfit David Pastrnak is wearing, what mood Chris Wagner is in, Charlie McAvoy’s smile and making sense of what Jake DeBrusk says. His future really does appear to be very up in the air.

Krug currently carries a cap-hit of of $5.25 million. When his current deal finishes out at this season’s conclusion, he’s surely due for a substantial bump in pay.

He’s seventh among all NHL defensemen in points (335) since his first full season in 2013-14. His corsi-for per 60 of 71.08 in all situations since Bruce Cassidy’s first full season is good for third among NHL d-men with at least 1,000 minutes of service time, per Natural Stat Trick. Most of his other advanced offensive numbers with those qualifications find themselves in the top five as well. He’s the key cog for the Bruins’ elite power play and it’s been that way for quite awhile.

And on and on we go with how valuable Krug is.

Despite all of that, he understands the financial aspect of what he could be asking for and where the salary cap could be after this stoppage.

“From a business perspective, I can’t put any assumptions on it but I can only guess that things are going to look a little different from a salary cap perspective next year,” he said. “Team structures as well are going to be affected by that.”

The Bruins are projected to have roughly $22 million in cap space this offseason, according to CapFriendly. No one knows quite how that will change after the smoke clears on the virus.

When Don Sweeney addressed the media in late February, he sang a similar tune with regard to Krug talks.

“I don’t have any updates in terms of a timeline,” Sweeney said. “We’ve continued to stay in communication with Torey, whether we find one at an appropriate time between now and the end of the year, I don’t know yet. We’ll have talks, they’ve been very cordial, both sides sort of understand where they are, and whether or not we can bridge something along those lines is to be determined.”

As for now, Krug is mostly focused on the present. The abrupt stoppage has been odd for him and his teammates physically and mentally. He’s doing workouts issued by the Bruins training staff, as well as ones given to him by his personal trainer. The Peloton app has been serving him well and he’s going on more runs.

“We’re robots,” he said about the change in routine. “Everyday we go to the rink, we have a routine. We get up, we set our alarms, if it’s a practice day or a game day, we’re setting our alarm for a certain time. I think most guys have two alarms on their phone and then you get up, go to the rink, have breakfast, stretch, we go to meeting, jump on the ice, get off the ice, eat lunch and our routine goes on from there. You get home and do whatever you do in your private life.

“So it’s just about reestablishing some sort of routine and sticking with it. It’s been tough so far.”

But due to the uncertainty of COVID-19 and his own future, where Krug gets back into that in-season routine is unknown.

“I was just in the moment, playing games to help my team win and hopefully push in the right direction to win a championship,” Krug said. “And now with this season paused, definitely wondered about what’s going to happen. But in terms of clarity, there’s pretty much been none.”

Maybe that unfinished business gets Krug to take less and stay. Maybe it doesn’t.