What Does the Donovan Mitchell Trade Mean for Celtics?

Do the Cavaliers become a legitimate threat to the Celtics and other east contenders after trading for Donovan Mitchell? 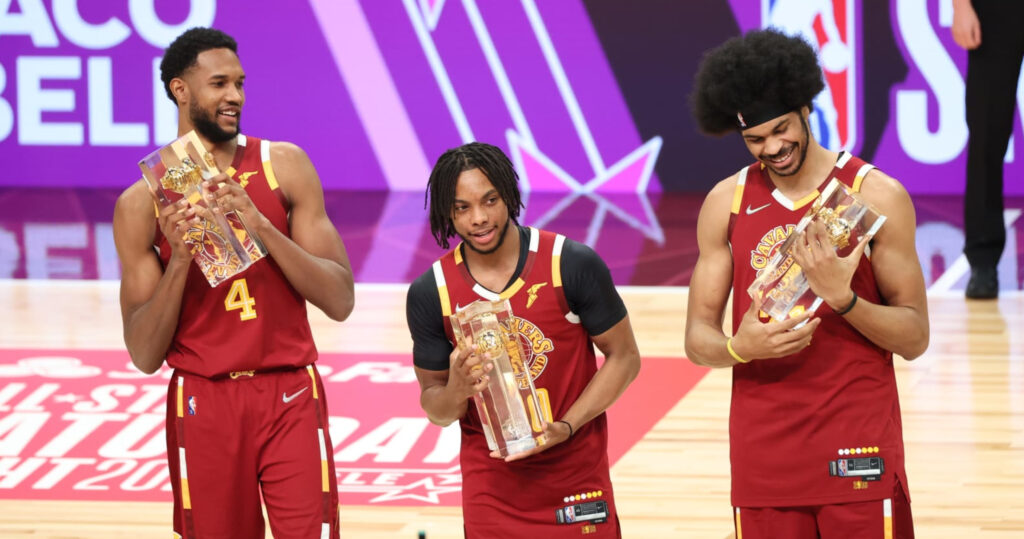 The NBA offseason all but concluded in a tidy two-week flurry of news items where Kevin Durant committed to the Nets, the Jazz traded Donovan Mitchell to the Cavaliers and restricted free agent Collin Sexton went back to Utah in a sign-and-trade. Just in time for training camp around the league kicking off on Sept. 27.

It’s surprising Mitchell didn’t land in New York despite Cleveland reportedly emerging as a sleeper team earlier this summer. The Knicks loaded up on future draft capital, punted on this draft, lined up with executives for Jalen Brunson and Mitchell’s playoff showdown in Dallas last postseason, and had several rounds of discussions with Utah about a possible deal. It may prove wise that they drew a line, with reports indicating R.J. Barrett, Mitchell Robinson, and an array of young players and picks appeared on the table at different points. The scary part for Knicks fans isn’t that New York missed on Mitchell. It’s that there doesn’t seem to be a plan.

Despite the tough negotiations showing just how many assets the Knicks have, they aren’t ready and a slow build takes them out of any reasonable ability to make noise in the east.

The move made more sense for Cleveland, already a sleeper who started 35-21 boasting the No. 3 defense into mid-February, now utilizing a mid-sized Lauri Markkanen contract to bolster a plodding offense with one of the game’s more dynamic scorers and consolidating future picks on a star under contract for at least three more seasons. Trading 2022 first-round wing Ochai Agbaji hurt, and effectively pushed the draft compensation to six picks in full. Yet for a team seemingly prepared to pour on the gravy of a Sexton return for however long it’d last, upgrading on him by multiple echelons is a no-brainer. Markkanen helped the Cavaliers play big and wing depth will become a question. Cleveland is undoubtedly much better and would be a tough playoff out for the Celtics.

How much better remains to be seen. Mitchell finished 2021-22 with an unforgivable defensive performance against Dallas that closed the book on a season where he finished bottom-10 among eligible players in defensive RAPTOR rating (238th) at -2.7. His offense rendered him 6.1 wins above replacement, but he’s joining a team with a firm defensive identity that’ll now start Mitchell and Darius Garland, a pair of 6-1 guards. Fortunately, the Cavs boast the most imposing front court in the sport between Evan Mobley and Jarrett Allen.

That’s about where the nit-picking ends.

Mitchell, 26 this season, has averaged 23.9 points per game for his career while shooting a consistent 44.1% from the field and 36.1% from three on massive volume. Last season marked a career-best 53.3% mark on two-pointers, including 70.8% inside three feet and 46.5% from 3-10 feet. He dished 5.3 APG to 3.0 TO, and only Joel Embiid, Luka Doncic and Trae Young surpassed Mitchell’s 32.2 usage percentage at his games played and minutes share.

While Garland can play off-ball, essentially splitting touches with Ricky Rubio last season before his injury, both Garland and Mitchell will need to adjust to less ball-dominant roles to relieve each other. Especially if they’ll re-integrate Rubio later in the season (ACL recovery).

That won’t click immediately after almost five years of the offense revolving around Mitchell in Utah. He logged over 70 touches per game last year, over six minutes each night, while his 12.0 pick-and-rolls ranked fourth, in the 88th percentile of efficiency (1.03 PPP). Garland followed closely, averaging 9.2 P&Rs, though far less efficiently. Garland received the 11th-most double teams in the NBA.

Garland will inevitably move into a role that more closely resembles his partnership with Sexton in 2020-21, when Garland shot 43.2% on 2.4 catch-and-shoot three point attempts. Mitchell, too, showed some C&S prowess that year from deep (42.9%, 3.2 att.) and 2021-22 was only the first season of his career where he shot under 40% in those situations (34.6%). Both players can enhance the other’s on-ball production as floor-spacing shooters.

The Cavaliers lack threes otherwise, and now wing becomes their biggest question at the most important position in the league. Seven straight champions have featured all-star wings since the Warriors won it all with Harrison Barnes in 2014-15, and a Cleveland team once led by LeBron James at small forward now features 6-6 Caris LeVert, 6-5 Isaac Okoro and a mix of Dean Wade, Cedi Osman and Lamar Stevens, who have played inconsistent minutes in recent seasons. LeVert shot 32% from three between Indiana and Cleveland last year, Wade fared better in 19 MPG (35.9%), but his impact leaned toward the defensive end. Stevens isn’t a shooter.

That places Okoro squarely in position to catch and finish passes from his guards, space the floor for the team’s pick-and-roll game and help defend next to a smaller back court. The former No. 5 overall pick is only 22 this season, with plenty of room to grow, but Zach Lowe broke down expertly how even at 35% overall from deep, Okoro’s No. 1-ranked 9.3 feet of space on three-pointers equates to some of the worst floor-spacing in the NBA. Opponents will ignore Okoro in the corners. LeVert covers more ground. Mobley and Allen don’t shoot threes.

Fortunately, the Cavs got plenty of experience playing bigger last year with Markkanen as a key floor spacer. Kevin Love shot 39.2% from three as the sixth man of the year runner-up. Osman provides solid shooting from the corners. Maybe the team can squeeze LeVert into the three with some ball time for balance.

They may need to look at moving LeVert or Love to seek a 3-and-D wing. They combine for $47.7 million in expiring salary. That’s free agent money for next summer ($32.6M cap space projected) and without picks for the foreseeable future, signings or one more trade could be this group’s final way to upgrade meaningfully (can offer a ’24 1RP swap). Could Gordon Hayward be the next leap this group takes if Charlotte struggles?

Those all would’ve been questions if the team never traded for Mitchell, with Agbaji joining the team as a 41.1% three-point shooter for Kansas on 209 tries (37.3% career), but never having played an NBA game. Now, we can ask whether this team will win a championship soon.

There’s no question Mitchell helps a group with a defensive backbone that’ll be hard to break. His skill hitting tough shots and carrying a heavy load on that end, particularly in the playoffs, doesn’t become available often, especially to Cleveland.

The question is, as everyone adjusts to new roles in year one, each lineup adjustment seems to leave them vulnerable in another place and expectations weigh on a relatively young hopeful contender, will they be able to join the Bucks, Celtics, 76ers, Heat, Nets and others atop a tough conference?

Prediction: 4th place in east. They’re firmly above the play-in line in the east, so it’s unlikely Boston sees them early in the postseason. There’s a better chance they knock out a fellow contender in that stage of the bracket, so their ascent might benefit the Celtics. Cleveland’s drop defense has bothered Boston in the past, but the Celtics’ ability to attack weak links in defenses and shoot should give them a significant advantage in a series.