Will Celtics Shortcomings Always Be Baked into Their Team?

The Celtics' shortcomings have appeared throughout their playoff run, at times looking like the old version of themselves, but they've overcome every loss. 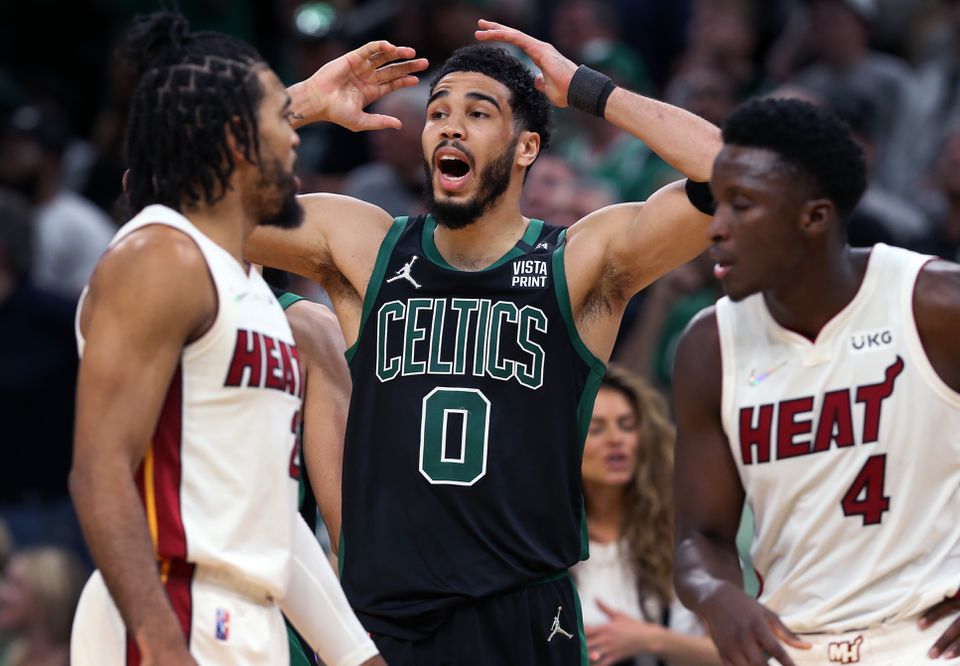 BOSTON — When the Celtics hit rock bottom in New York after their infamous 25-point meltdown against the Knicks in January, Ime Udoka asked whether he has to call timeout, stop all of Boston’s moment and start to micromanage the team’s offense. It’s not the way he coaches, the plan for his offense or how the staff wanted Jayson Tatum and Jaylen Brown to lead the Celtics’ offense.

Turning the two stars into natural playmakers became Udoka’s mission statement upon ascending to Boston’s head coaching role, a bet they’re still awaiting the final results on amid an unsteady east finals against the Heat. The Celtics have turned the ball over 89 times (14.8/game) to Miami’s 72, giving up 17.8 points per game following those turnovers, not to mention 12.8 second-chance points per game.

The Celtics ripped off 28-of-35 to close the season, rose to a historic level of dominance on the defensive end of the floor and even rode a passing-heavy attack to rank No. 1 in offense for the closing stretch of the season. All that progress will remain valid if Boston squanders a 3-2 lead in the east finals against the Heat, but win or lose, a 111-103 disaster in Game 6 became the latest reminder of what could become the Celtics’ fatal flaw this season. As ball-handlers, Tatum and Brown deliver inconsistent results.

The Heat honed in on that midway through in the series and risked foul trouble to get aggressive trying to dislodge the ball from Brown. Victor Oladipo had entered Game 3 in the second half and stripped Brown three times in a row. The Heat looked prepared for how to attack Brown’s dribble drives. He complained of no-calls on hand checking after Game 5, but the Celtics escaped despite giving the ball away 15 times, 10 in the first, highlighted by a string of loose dribbling sequences from Brown in the first quarter. The Heat could already be in the NBA Finals if not for a historically-bad shooting game on Wednesday.

“I think (Udoka) was talking about the whole team,” Brown said after Game 5. “I wasn’t the only person that had some turnovers, but it is what it is. Imma keep being aggressive, imma keep getting into the paint, making them stop me. I just gotta do a better job of finding the right guy.”

Tatum made major strides this season at passing out of double teams and is averaging 5.9 assists per game in a postseason where he’s been routinely trapped, doubled and faced a vicious drop in round two against the Bucks. He proved Udoka correct in his assessment that Tatum could walk the line between scorer and playmaker, attacking mismatches, while also trusting teammates like Grant Williams to bury threes away from him. Tatum also became a better screener, slipper and finisher around the rim, making First Team All-NBA this week. It’s still a difficult balance that requires constantly assessing how the defense guards him.

As a decision-maker in the half court, Tatum can return to his habits of playing in a crowd, forcing up shots early in the clock, or searching for foul calls. All three cost the Celtics in a 14-point meltdown in Game 5 against the Bucks that nearly ended Boston’s season weeks ago. Tatum bounced back with one of the best games of his career in Game 6, before his trust in Williams prevailed in Game 7. The inconsistency continued into this round, a 3-for-14 shooting performance and six turnovers undermining the Celtics’ Game 3 comeback attempt.

“Having carryover from what’s been successful for us throughout the playoffs, throughout the second half of the season,” Udoka told CLNS Media after Game 3 was the reason for Boston’s inconsistency. “We understand how they’re going to guard us, they’ve done it all series. Every team does that, wants to load up and you over-penetrate and get yourself in tough situations instead of relying on your teammates, that’s the result.”

The Celtics grew adept at suppressing their worst attributes this year. Derrick White’s arrival increased the off-ball movement. Marcus Smart honed in on his point guard responsibilities over looking for his own shot. Al Horford regularly tosses outlet passes up the floor. Grant Williams became an indispensable floor spacer. Robert Williams provided a release valve for broken sets with his lob finishes, offensive rebounding and quick movement passes that led to performances like his first career triple-double against the Suns in December.

There’s no doubt Smart and Williams’ injuries, however much of an excuse they become, have hampered their hampered their ability to take the pressure off Brown and Tatum. They’re trying, Williams III scoring 10 points in the third quarter before Udoka went away from him in the fourth quarter, explaining his decision on Saturday as a mix of the center reaching 26 minutes and a key three-pointer down the stretch from Horford. Smart gutted out Game 3 and nearly helped turn it into a win after turning his right ankle. He struggled in Game 6, shooting 1-for-9 from deep in a throwback performance where he shot threes liberally.

Horford hasn’t factored into the offense recently either, particularly since his 30 point outburst in Game 4 at Milwaukee, averaging 8.8 PPG and 4.3 APG on 44.6% shooting, likely due to his major defensive assignments. Williams III, however, gets missed numerous times on lob and dump-off opportunities. Udoka mentions it repeatedly. The team and Williams III himself seem to have gotten away from utilizing the big man as an offensive hub.

Udoka isn’t going to micromanage this group. He’ll stop play to halt runs, show clips and adjust at halftime, but he’s not going to rain play calls from the sideline on Brown and Tatum. It’s not who he is, or what the players want and that’s not unique to him, whether you like it or not. We’ll find out soon if that’s a championship formula. A loss wouldn’t be the end game for this group, but a reminder of how much they had and still have to overcome. That’s the worrisome part of Brown’s deflection on his turnovers, Udoka walking the same line publicly for most of the season until Wednesday.

“(Brown) didn’t turn it over,” Udoka said after Game 5, assessing his turnaround.

“The crowd is there. You’re acting like you’re surprised that they’re reaching or poking from behind. It wasn’t as much live ball turnovers trying to make a nice pass, it was literally getting taken from us. So be strong with the ball. We’re five games in right now, having way too many of these turnovers not being strong with the ball in the crowd. He understood that. We talked about it at halftime … knew if we cleaned it up, we’d be in good shape.”

Udoka gave Brown and Tatum are the tools through principles, and those two often set the tone for organization, aggressiveness, or sloppiness. The team probably does need to live with some amount of Brown turnovers to get the best out of him, racing downhill, embracing contact in transition and going on runs like his 11-point outburst in the third quarter on Friday that got the Celtics back in the game.

Other runs where the Heat appear to savor at him trying to dribble into traffic have demoralized Boston. Brown had one assist and four turnovers in Game 5, now averaging 3.4 APG and 2.9 TOV/G this postseason. It’s one of the team’s attributes that appears baked in, for now, along with missed free throws like his critical pair with two minutes to go in a tie game that didn’t fall before the end of Game 6.

The team can change and continue to grow into the future, but they appeared ready now. A Game 7 loss would raise new questions about whether that’s accurate. In spite of the team playing head-and-shoulders above the competition in 2022, smashing some of the league’s best teams, Williams III’s injuries, Tatum’s complaining, Brown’s dribbling all sent the team spiraling at different points during their run.

Williams III’s ability to play through pain, Tatum’s to shake off the prior game and Brown’s elite shot-making have all negated those lows though, and the Celtics have won following each loss this postseason, now 6-0, with seven straight in must-win situations including Game 7 against Milwaukee. Tatum practices what he preaches about being unable to change the past, playing some of his best games ever after losses this spring. Brown, too, overcame his first half troubles in Game 5 with a game-changing scoring run in the second half.

They nearly squandered a double-digit lead against the Nets in Game 1 of the first round, and salvaged a victory with the cleanest set of the post-Big Three era to set up a Tatum game-winner — without a timeout or play call. That changed how the series looked and possibly the outcome. The team held off a massive Brooklyn rally in Game 2 and put them away, as the Nets rolled over when the series shifted back home.

Now, they’ll get one last chance to right their wrongs and prove they’ve fully moved on even if old habits occasionally linger. It’s never a straightforward path to a title.

“We’re frustrated,” White said post-game. “But if it were easy, it wouldn’t be us.”