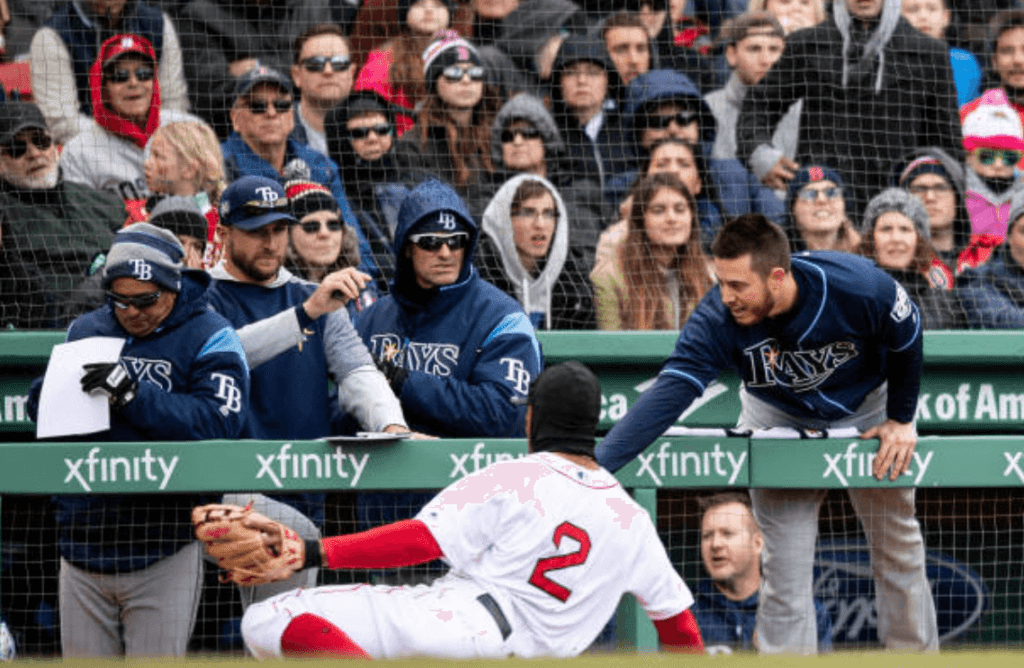 BOSTON — Not even an injury to their best player can slow down the Red Sox.

Trailing 7-2 entering the eighth inning, the Red Sox rallied for six runs on the strength of six straight two-out hits and beat Tampa Bay, 8-7, to complete a three-game sweep at a chilly Fenway Park. It was a history-making win for the Red Sox.

They are 8-1, the best nine-game start in franchise history. It was also a stunning comeback as they had lost their last 96 games when trailing by five or more runs in the eighth inning or later.

The eight-game win streak ties the second-longest April run for the club in the last 100 years (1978, 1982). They won 11 straight in April in 2009. The Red Sox are now 5-0 in one-run games and Alex Cora became the second Red Sox manager to begin his tenure winning at least 8 of 9 since (Joe) Morgan Magic in 1988, when the Red Sox won 12 straight under the Wizard of Walpole.

Half of the 31,979 that turned out on another bitterly cold day left before the rally. But those who stayed got quite the reward.

Christian Vazquez had the at-bat of the game, fouling off three pitches before singling in a run to make it 7-6 Tampa Bay. Mookie Betts tied the game with a single and Andrew Benintendi doubled home Betts for the go-ahead run. Craig Kimbrel got the save as the Red Sox head into the 3-game Yankee series Tuesday with a head of steam. Tampa Bay lost its eighth straight and stands 1-8.

And that’s how you complete the sweep!! ? pic.twitter.com/78wltw6qTi

The best player in the Red Sox red-hot start to 2018 has been Xander Bogaerts. He’s hitting .368 with a Saturday grand slam and has been the anchor of the Boston lineup.

When he slid into the concrete lip of the Rays dugout chasing down a rolling ball, you could sense a palatable sense of concern among everyone inside Fenway Park.

Even with their eighth straight win, the true concern is the fate of Bogaerts, who injured his left ankle chasing down a relay from J.D. Martinez in left field on a Joey Wendle triple. The throw from Martinez short-hopped Bogaerts, who tried to backhand the ball. The ball flipped out of his glove and started rolling toward the visitors’ dugout.

Bogaerts made his way out of the dugout and tried to take his position at short before the next batter but took a knee and went to the ground. Alex Cora and the training staff came out and Bogaerts eventually had to be helped off the field.

Eduardo Rodriguez made his first start of 2018, striking out the side in the first. But the first pitch of the second inning was hammered 430 feet to straightaway center by C.J. Cron as the Rays tied the game, 1-1.

Rodriguez struggled from that moment on with pitch efficiency, though he did strike out seven in 3 2/3 innings. The problem was he also allowed five hits, three walks and three runs. He also needed 73 pitches to get through three innings and finished throwing 92 in total on the day.

It was also a rough day in left for J.D. Martinez. The slugger, getting the start in left as Jackie Bradley Jr. was getting the day off, played left field while Andrew Benintendi moved to center and Hanley Ramirez served as the designated hitter.

Martinez caught a line drive in the fourth inning and had a routine throw to make back to second base to double off a runner and allow Rodriguez to get through the fourth. But his throw was way off line and continued the inning. Hector Velazquez entered for Boston and allowed a Matt Duffy single before getting the next batter to retire the side.