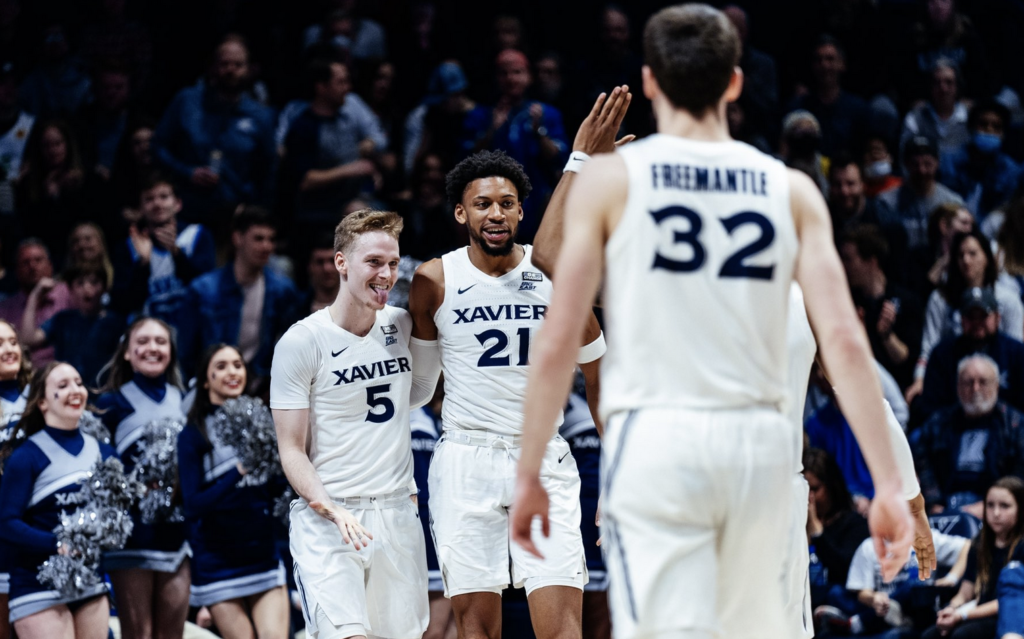 CINCINNATI — Talk about just what the doctor ordered. What the Xavier Musketeers and their embattled head coach Travis Steele received Saturday night amounted to a gift from the schedule-makers.

And most importantly, they took full advantage on Senior Night before an appreciative crowd at Cintas Center.

Nate Johnson drilled his first four three-point attempts and finished with 25 points while Jack Nunge and Colby Jones added 16 apiece as the Musketeers snapped out of a five-game skid with a 97-75 win over lowly Georgetown.

Senior captain Paul Scruggs received an emotional hug from teammates and a standing ovation from the crowd as he left the game with 1:44 left and finished his final game at Cintas with eight points and four rebounds.

Colby Jones on Nate Johnson in first half "He shot the crap out of the ball" pic.twitter.com/yo8CyaLVnV

Xavier, which is among the “last four in” in Joe Lunardi’s NCAA bracketology, was desperate for the win. They improve to 18-12 and finish the Big East regular season with a very disappointing 8-11 mark after being picked to finish third in preseason polling. They head into the Big East Tournament this week and will play Wednesday as the No. 8 seed against No. 9 seed Butler (FS1 TV) at 4:30 pm ET.

During a skid in which they lost five in a row and seven-of-eight, the Muskies struggled badly in the first half of nearly every game. That would not be the case in this contest.

Xavier shot 9-of-14 from three-point range in the first half and 17-of-26 from the field overall in the opening 20 minutes, racing out to a 54-30 halftime lead. Xavier was firing on all cylinders, not just from deep. They executed in half-court with slip screens in which their bigs were sliding to the basket for layups and in transition, taking advantage of Georgetown’s five turnovers.

"I think this is a huge turning point for us. I think it will springboard us." @XavierMBB head coach Travis Steele on the regular season finale win over Georgetown. pic.twitter.com/xDwZtjbIax

The Musketeers had superior ball movement all night, earning assists on their first 21 field goals and finishing with 31 assists on 35 field goals on the night.

More than anything, the Muskies played great defense, holding the Hoyas to 9-of-31 from the field, including 1-of-10 from three-point range, while beating the visitors on the glass, 24-12.

For the once-proud Hoyas and their head coach Patrick Ewing, they finished their worst-ever Big East season winless at 0-19. Ewing, who led the Hoyas to NCAA championship in 1984 and NCAA Finals appearances in 1982 and 1985, lost his 20th straight game and finished the regular season with an abysmal 6-24 record.