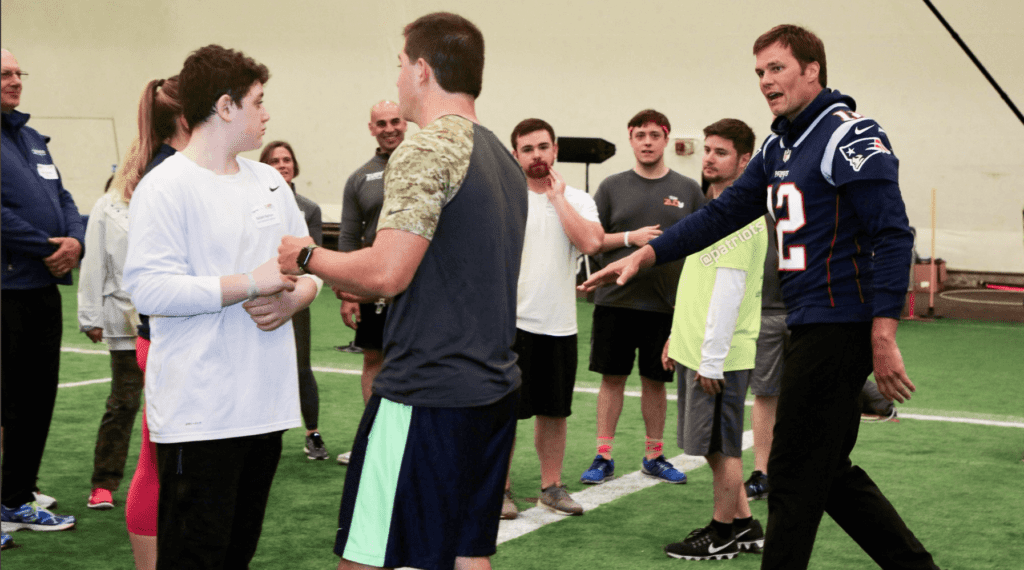 Tom Brady and Rob Gronkowski, as promised, are back in Foxboro and ready to go for mandatory Patriots minicamp starting Tuesday. They were both willing participants in Monday’s fantasy camp sponsored by the team. So apparently, they’re on board.

In the most melodramatic offseason in recent memory, the two highest profile stars of the Patriots decided to stay away from “voluntary” OTAs the last two weeks, choosing to make statements about respect, value and their place in the hierarchy of the Patriots pecking order.

Gronk will likely get his wish. Brady may or may not receive some concessions from Bill Belichick vis a vis owner Robert Kraft.

It has literally been silly season in Foxboro ever since Belichick met with Kraft at Davio’s less than 48 hours after Malcolm Butler’s mysterious benching during the defenseless Super Bowl LII loss to the Eagles.

Before and after! @RobGronkowski sheds his locks for kids with cancer at annual #BuzzForKids. pic.twitter.com/28q2ZumY55

While these three minicamp sessions are considered basically just an extension of the OTA work already underway, it will be interested to see how Brady and Gronk get up to speed, jumping aboard the “moving train” everyone in Foxboro is always talking about.

Here are 6 areas to keep a close eye on this week that have less to do with drama and more to do with how this Patriots team can really start accelerate their on-field that will lay the groundwork for July’s training camp, preseason in August and the 19th season of Brady and Belichick in New England:

Brady splitting time with Brian Hoyer and Danny Etling: It will be fascinating to see just what kind of role and time Belichick decides to give Brady during these sessions. If Brady sits on the sidelines for a majority of it, we’ll have some indication from the coach that he wants to reward the players who actually showed up in backup Hoyer and the rookie from LSU. What to expect: Brady sees some snaps but not a majority.

Left Tackle: With Nate Solder off to the Giants, these minicamp sessions (all 3 scheduled sessions open to the media) figure to be our first good look at his replacement. Rookie Isaiah Wynn out of Georgia will get a look-see, as will LaAdrian Waddle, Matt Tobin and Trent Brown. It’s Waddle’s job to start but this is a fluid situation. Marcus Cannon is one tackle who figures to stay put in his comfort zone at right tackle. What to expect: Brown, Waddle and Wynn will all see time on the left side.

Wide Receiver rotations: This area bears very close watching, beginning not with Julian Edelman but Malcolm Mitchell. Mitchell has struggled to get back on the field after a nagging knee injury from 2017. His reps in OTAs and minicamp could be a tell-tale sign. Edelman looked good in OTAs last week but we won’t know for sure until contact in training camp, though his strong cuts in and out of routes are no doubt a very positive sign. How will offensive coordinator Josh McDaniels work in newcomer Jordan Matthews with Chris Hogan and Cordarrelle Patterson? Is Braxton Berrios out of the University of Miami the new great elusive slot receiver in New England? What to expect: Lots of Edelman running, cutting and various mixtures of Matthews, Hogan and Patterson in routes.

Dont’a Hightower and the linebackers: Another star player who missed the last nine games of the regular season and all three playoff games with a pectoral injury. He was considered the heart of a very good and active defense in 2015 and ’16. His play in the second half of Super Bowl LI was the reason the Patriots were able to execute the greatest comeback in Super Bowl history. How will he bring along Ja’Whuan Bentley and Sam Christian and work them in with Kyle Van Noy? We got an idea last week of his leadership. Now, we’ll see more examples during these three sessions. What to expect: Lots of different personnel groups as Belichick continues to find out what his newbies have absorbed about the defense, with no Patricia on hand.

Jason McCourty, Duke Dawson and the corners: This is another fascinating area. With Malcolm Butler exiled to Tennessee, the No. 2 corner job is up for grabs opposite Stephon Gilmore. McCourty figures to get this gig pretty much from the jump but on the slot there are names like rookie Duke Dawson, Eric Rowe and Jonathan Jones to keep an eye on. What to expect: This should be pretty straightforward, with McCourty getting the starting CB role oppo Gilmore while Rowe and Dawson lead the rotation at the slot.

Sony Michel, James White, Rex Burkhead, Jeremy Hill, Mike Gillislee: The running back corps is as deep as the Patriots have had in the McDaniels era, in terms of production and versatility. Michel and White could both serve as third-down backs capable of pass catching, with Michel showing more explosive home run ability. Burkhead is a reliable between-the-tackle runner who can also catch. Hill and Gillislee could be fighting for a short-yardage gig. What to expect: All five of these backs plus always reliable Brandon Bolden should get reps and don’t expect to make too much of a judgment on any of them until team gets in pads for training camp in late July.

There you have it. Actual football storylines. Assuming no one pops off about lingering resentment from the Malcolm Butler benching, we should enjoy the next three days of football as a tease for what’s to come later in the summer.