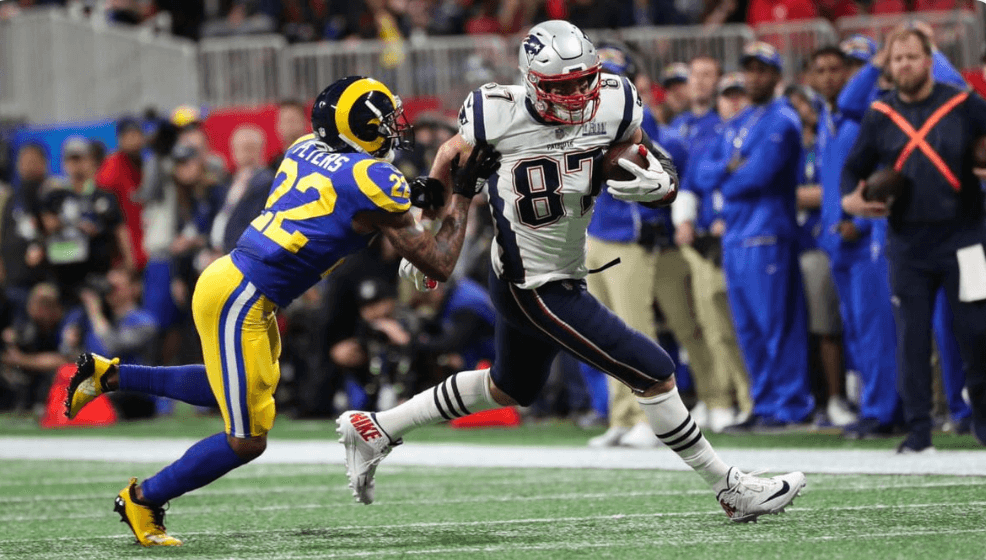 ATLANTA — The Patriots sixth Super Bowl championship was their most grueling.

Sony Michel’s 2-yard touchdown run with 7:00 left in the fourth quarter broke a 3-3 tie and lifted the Patriots to a 13-3 win over the bruising Los Angeles Rams before a Patriots-heavy crowd of 70,081 at Mercedes-Benz Stadium. Stephen Gostkowski’s 41-yard field goal with 1:12 left provided insurance.

And the first TD of the game goes to…

With the Rams driving for a potential game-tying drive, Stephon Gilmore intercepted Jared Goff at the Patriots 2 with 4:17 left to end the Rams threat. Click here for the full box score.

In a surreal flashback to Super Bowl XXXVIII, Patrick Chung suffered a gruesome right forearm injury in the third quarter and spent the fourth quarter cheering on his team with his arm in a sling from the sideline the rest of the game.

The Patriots didn’t make things easy on themselves all game long.

For the ninth consecutive Super Bowl under Bill Belichick and Tom Brady, the Patriots failed to score a touchdown in the first quarter. They have 3 total points in over two games of first quarters.

To make matters worse, the Patriots ran 22 plays in the first quarter and had three possessions in Rams territory and couldn’t put a single point on the board. The first possession ended with a Brady interception on a pass intended for Chris Hogan when Nickell Robey-Coleman tipped the pass and Cory Littleton collected it at the Rams 27.

But the Rams went 3-and-out. The Patriots got the ball back, and with the help of a controversial personal foul call on Robey-Coleman for a tackle on Rex Burkhead, the Patriots marched to the Rams 28. But Stephen Gostkowski was wide left from 46 yards and the game remained scoreless.

The Patriots drove into Rams territory again but that drive stalled at the LA 40 and ended with a punt.

The only bright point of the first half was Julian Edelman, who ended the first 30 minutes with seven catches on eight targets for 93 yards.

The other big story of the first half was the play of the defense, specifically Danny Shelton, who was a bruising disruptive force in the middle of the line, blowing up run plays and pass protection.

The Patriots finally broke through when their fourth drive ended with a 42-yard Gostkowski field goal, giving the Patriots a 3-0 lead with 10:29 left in the second quarter. Those would be the only points scored by either team in the opening 30 minutes.

The Patriots had 4th-and-1 at the Rams 32 but Brady’s pass for Rob Gronkowski fell incomplete. New England’s first five possessions reached Rams territory but ended in resulted in 3 points.

The Patriots defense, with plays like a 14-yard sack from Kyle Van Noy, limited the Rams to 57 total yards in the opening half. Jared Goff was just 5-for-12 for 52 yards.

The second half began on an ominous note when Jonathan Jones came over to help Patrick Chung make a tackle on Todd Gurley on a run to the outside. Chung’s right arm got caught between Gurley and Jones’ helmet, causing a nasty injury. Chung’s arm was immediately placed in an aircast and he walked off the field to the locker room and was ruled out of the game.

The Patriots managed to force yet another third down stop. The Patriots got the ball back but was forced again to punt. Ryan Allen’s punt was downed by Matthew Slater at the Rams 2. The Rams went 3-and-out. But Johnny Hekker broke Allen’s Super Bowl record for a punt (set in SB XLIX) when his line drive went 65 yards.

The first eight Rams drives ended in punts, a Super Bowl first. The ninth finally resulted in points for the Rams as Jared Goff drove the Rams to the Patriots 26. Dont’a Hightower broke through for a sack on third down forcing Greg Zuerlein to connect from 53 yards, which he did with 2:11 left in the third to tie the game, 3-3. The Rams could’ve grabbed the lead when Brandin Cooks broke wide open in the back of the end zone. But Goff was late seeing him, and his throw was late enough to give Jason McCourty time to come over and break it up just in time.

Following a 25-yard fade completion to Rob Gronkowski that took the ball to the Rams 2, Sony Michel went up the middle for the go-ahead touchdown.

Then Stephon Gilmore picked off Goff at the Patriots 2 to allow the Patriots to chew up valuable time the rest of the way.

Greg Zeurlein missed wide left from 48 yards in the final seconds and then Brady took a knee to set off the silver, blue and red confetti.