A Cornucopia of Game and Player Props for Turkey Day 2021 | BetOnline.ag

Running through BetOnline.ag's game and player props for Thanksgiving Day. 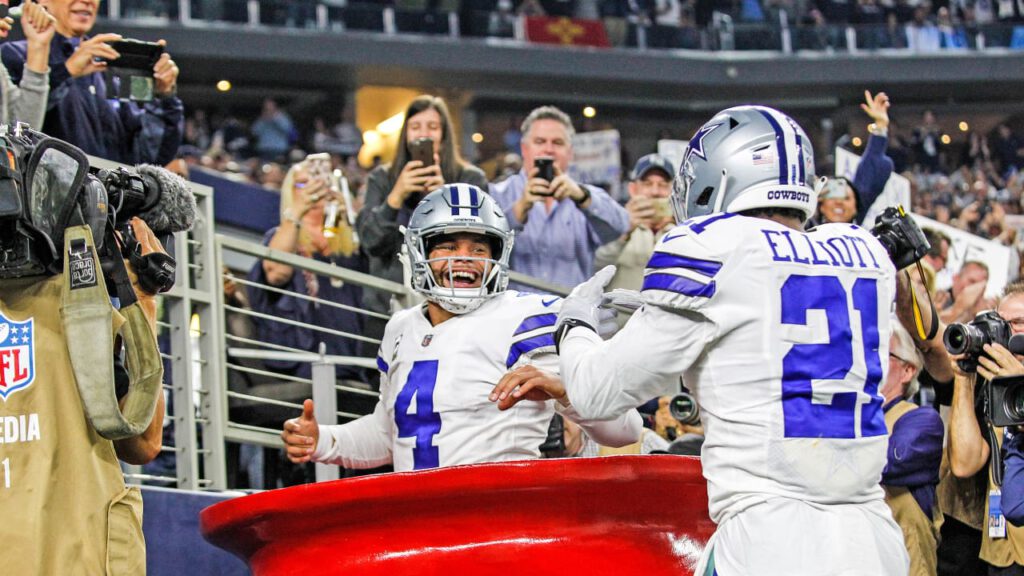 What’s Thanksgiving Day without being surrounded by your family as you sweat out prop bets? You know the scene: the game’s a blowout, the clocks winding down, but then – out of the corner of your eye, you see your second cousin’s boyfriend. “What’s he doing? The gravy’s getting cold!” He’s pacing the living room waiting for Tony Pollard and Kenyan Drake to get garbage time carries of course! It’s a tale as old as time.

Lucky for you, our friends over at BetOnline.ag have a TON of props for Thanksgiving Day.Here are my thoughts on just about all of them:

The Dallas offense has been a rollercoaster over the last month – putting up 16, 43, and 9 in their last three games. That being said, they tend to live for the moment on Thanksgiving and I think they’ll use that to get back on track. The Bills might be a decent value pick here at +275, but I can’t go against the Cowboys on Turkey Day.

Dallas scores the most points on Thursday in a throttling of the Raiders.

The Bears stink – like, straight up stink. I don’t care if it’s Dalton, Fields, or Jim McMahon under center, this team is a dumpster fire and you’re going to see that in Detroit on Thursday afternoon.

I love the value of the Bears at 5/1 here. I’m shocked they’re this low on the board. With the QB position in limbo and rumors of Nagy losing the locker room, I don’t think they’re putting up many points at Ford Field.

Most Passing Yards on Thanksgiving

This one’s tricky since I think Dallas is going to roll even without Amari Cooper and Ceedee Lamb. They have a 1-2 punch in the backfield and enough secondary receiver talent to still put up points. However, the Bills also desperately need a win, and Josh Allen has proved in the past that he can play under the Thanksgiving pressure.

Buffalo get their mojo back in prime time with Allen putting on a passing clinic.

Most Receiving Yards on Thanksgiving

This is just the top five (with Beasley and Mooney tied at +1200), to save both time and energy because with Cooper and Lamb out, it’s going to the the Michael Gallup show in Dallas. Gallup has missed most of the season due to injury, but had 10 target on Sunday and will continue to get looks on Thanksgiving. I like the 6/1 odds here for the Cowboys number one target.

Most Rushing Yards on Thanksgiving

My Cowboys-heavy prop bets continue on as I think Dallas is going to dominate on the ground as well. Zeke has played great football on Thanksgiving in the past, and he’ll continue that trend this week.

Although he’s been splitting time and carries with Tony Pollard lately, I still think he’s a smart play here.

As you’ll see in my Thanksgiving Day game preview tomorrow, I think we’re going to get a LOT of points scored on Thursday. All six of these teams lost in week 11 and will be looking to bounce back strong. Since this is just a combined total and not a plus-money prop, we’re going to count this one as a full unit.

Happy Thanksgiving everyone! Make sure you keep it here on CLNSMedia.com for the rest of the week to check out my Thanksgiving Day game previews, Patriots vs. Titans preview, and Week 12 Games to Watch!