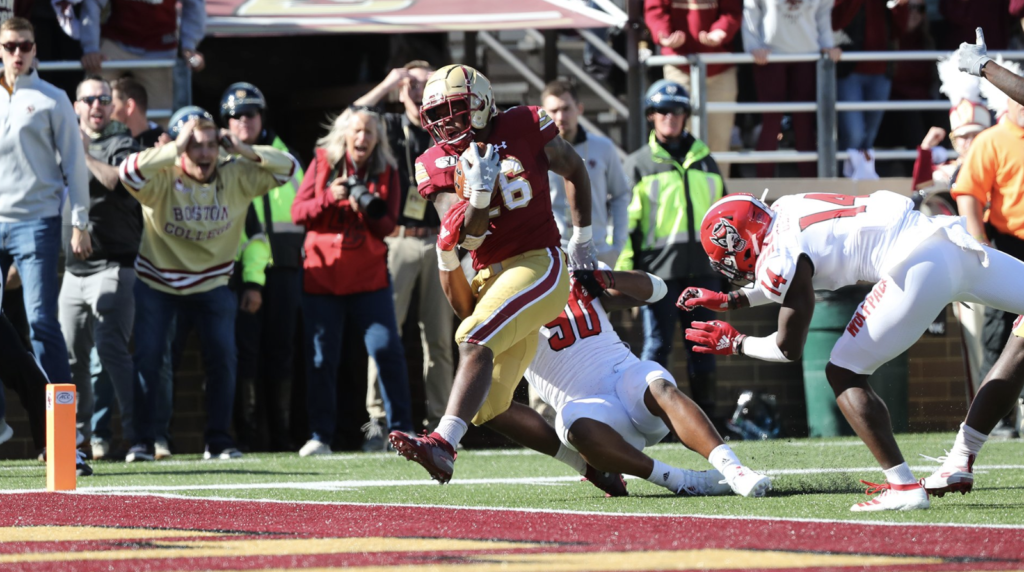 CHESTNUT HILL — When a team runs the ball the way the Boston College Eagles piled it up against North Carolina State Saturday, football becomes a very easy game, especially for a backup quarterback making his first start before the home crowd.

With redshirt sophomore Dennis Grosel making his first career start in place of the injured Anthony Brown, the Eagles turned to legs of David Bailey and A.J. Dillon to run roughshod over NC State, 45-24, Saturday afternoon before an announced crowd of 30,275 at Alumni Stadium.

A.J. Dillon scorched the Wolfpack for 223 yards on 34 carries and three touchdowns while Bailey ran for 181 yards on 16 carries had touchdown runs of 54 and 48 yards in the second quarter as the Eagles evened their ACC mark at 2-2 on the season and 4-3 overall. BC finished with 429 yards on 60 attempts with five touchdowns and an average of 7.2 yards a carry, the most since 420 yards against NC State on Nov. 16, 2013.

The Eagles dominated the Wolfpack on the ground on both sides of the ball, outgaining NC State 234-(minus-4) at the half, and 342-2 through three quarters.

All of this made life very easy on Grosel, who was just 6-of-15 for 103 yards. Grosel came on in relief of Anthony Brown on Oct. 5 in Louisville after Brown left with a season-ending knee injury. Ironically, it was against NC State in 2017 when Brown also suffered a season-ending ACL tear. Grosel managed the game well when pressured, including a key pass to the left flat on third down from his end zone that gave Grant Carlson more room to punt from the end zone.

Grosel’s end-around 11-yard run to the right from the 2-yard line on third-and-10 extended a drive that eventually turned into 16 plays and 98 yards and ended with a Dillon 2-yard touchdown run.

Grosel also found Hunter Long on a 51-yard tight end screen with great downfield blocking from Kobay White that put the Eagles in business at the NC State 7. But a false start led to Aaron Boumerhi pulling a 38-yard attempt wide left.

DB out here slicing up the Pack D. pic.twitter.com/3zyeT0w5IU

Boston College posted a pair of impressive goal line stands from the 2 yard line, one coming in the second quarter and the other in the third.

Redshirt junior linebacker Max Richardson (with 10 tackles) had a huge impact on the game. In the first quarter, he applied pressure to the legs of quarterback Bailey Hockman in the Wolfpack end zone, forcing a rushed pass that was picked off by Jason Maitre and returned eight yards for BC’s first score of the day.

Richardson also stood up Jordan Houston at the one yard line on a second quarter red zone threat to help turn away the Wolfpack.

Bailey’s runs of 54 and 48 yards helped the Eagles take a 24-3 halftime lead. They were never threatened in the second half.

The defense stepped up again in the third quarter when the Eagles forced incompletions on third and fourth down from their own 2.

The Eagles nearly did it for a third time later in the quarter but Thayer Thomas caught a 6-yard pass from Devin Leary to give NC State its first touchdown of the game, cutting BC’s lead to 31-10.

The test gets much tougher for Grosel and the Eagles next week as they travel to South Carolina to take on No. 4 ranked and defending national champion Clemson for a Saturday game in primetime.