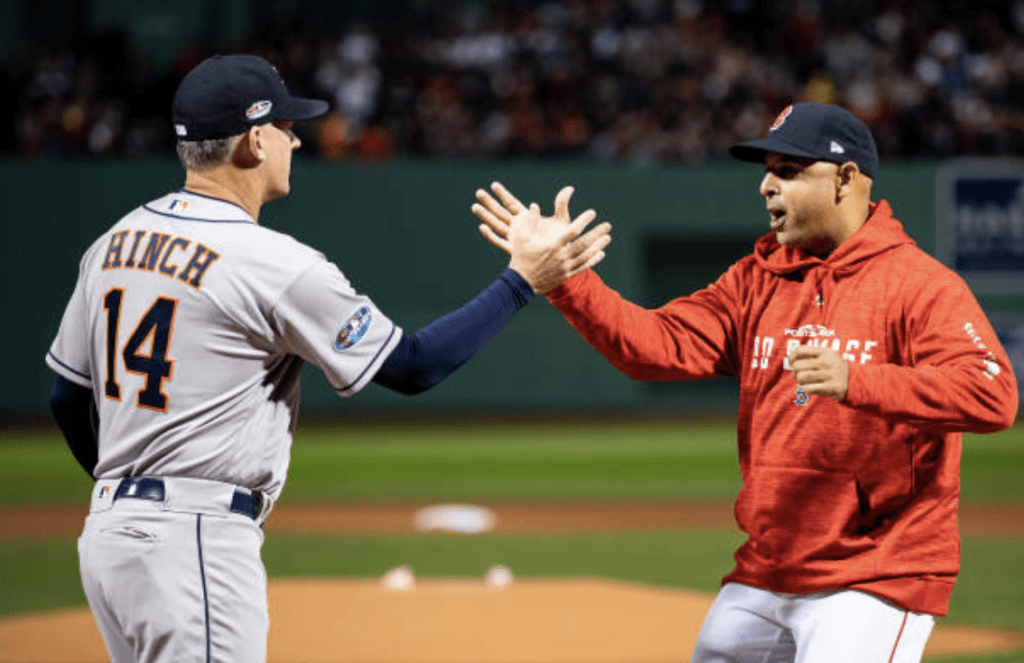 BOSTON — Both Alex Cora and his close professional friend and mentor A.J. Hinch laughed at the suggestion before Game 2 Sunday.

With the Red Sox down 1-0 and facing the prospects of going down 0-2 heading to Houston for Game 3 Tuesday, was Sunday’s Game 2 a “must-win” for the Red Sox?

“No, it’s not a must-win situation for the Sox,” Cora said with a smile to WBZ’s Jonny Miller. “It’s a game that we know it’s important, just like yesterday, just like the rest of the series. And that’s the way we’ve been looking at it the whole season. They’re all important games. And we’re going to show up today. They got the information already. They’re going to use it to their advantage and then go out there and play the right way.”

The “right way” is something Cora has emphasized all season. Now, with the postseason in its third round, the Red Sox manager knows that ramps up.

“I mean, this is what it’s all about,” Cora said before Sunday’s Game 2. “It’s actually fun. We work the whole season and to put these guys in situations to be successful, and now it’s like you better be almost perfect, I guess, because the opposition is that good.

“Now we’re playing the world champs, and for whatever A.J. says about our team, best record, whatever, they’re pretty good. And you have to be almost perfect as far as like your moves and put guys in situations that they’re going to be successful. And that’s a challenge, but I love it. I do enjoy it.”

Cora admitted he’s in a different zone now, both in the office and at home.

“There’s something about, like, preparation that goes on that you know you prepare and then you’re with the family, having breakfast and all of a sudden there’s an iPad on the table and you want to look at another video for some reason.

“Mentally you have to be locked in throughout. I’m not saying that I don’t have a life besides this, because I do. But it’s fun. It’s fun. It’s what every manager dreams of, to be in this situation, to be — your team in the spotlight and to maneuver X amount of games to try to win the World Series.”

Cora was certainly locked in during the Yankees series. He made two key moves with his bullpen in Games 1 and 4, putting a starter in the eighth inning of each game to preserve a win. He also started Ian Kinsler at second over Brock Holt in Game 4 after Brock Holt’s cycle in Game 3.

Cora’s former boss knows the Red Sox manager as well as anybody, since Cora served as A.J. Hinch’s bench coach in 2016 and ’17.

“Well, it’s just Game 2. I don’t know that their backs are against the wall as much as they had a tough game (Saturday) night. I expect them to come out and be really good,” Hinch said. “I always talk about myself in the sense that I don’t panic and you’re not going to see anything different whether we’re up or down or elimination game or not.

“What I also noticed, it wasn’t a magic carpet ride for them or us. We both had sets of adversity, having to fight through some things. We just made it look a little bit easier than some teams because we won so many games. But I expect them to be good, and they’re going to come out ready to play.”

While Hinch has a sense of tendencies with Cora and how he’ll use his roster, including the bullpen, he’s not going to waste time overthinking it.

“I go by the phrase ‘manage your own team.’ I have hard enough time managing my own team; I don’t want to manage his team,” Hinch told me. “And we’ll pay attention to what he does. We know what he’s done in the past series and all bets are off in the postseason. You see some unpredictable things in the postseason.

So when you get too caught up into making predictions you can get yourself in trouble. But focus on our guys. When he gets a guy up we’re well aware with who’s warming up with the video technology, and we’ve got our scouting reports and we’ll go with it.”