The Red Sox caught a big break in the top of the 13th, paving the way for a walk-off 6-4 win over the Rays 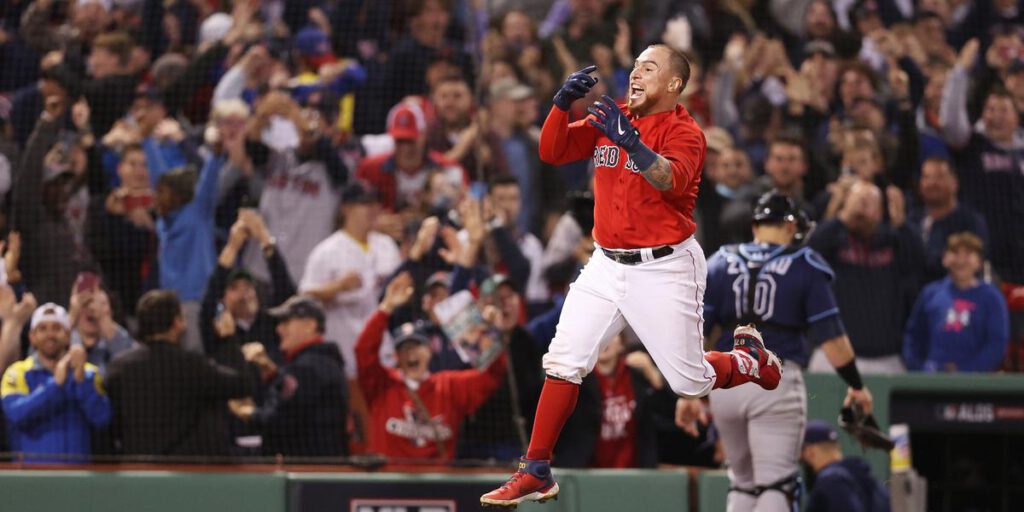 Sometimes it’s better to be lucky than good.

In Game 3 of the ALDS against the Rays the Red Sox were both.

Christian Vazquez hit a walk off 2-run home run in the bottom of the 13th inning to give the Red Sox a 6-4 win and 2-1 series lead. But not before a bizarre, and very fortunate series of events in the top of the frame.

With a Yandy Diaz on first, Kevin Keirmayer hit a ball to the wall in right center. The ball caromed off the wall, then it hit off right fielder Hunter Renfroe before bouncing into the Red Sox bullpen. The umpires conferred and got on the horn to New York before ruling it a ground rule double, putting runners on second and third and wiping a run off the board. Red Sox reliever Nick Pivetta struck out Mike Zunino to get out of the jam.

The Red Sox trailed early in this game after starter Nathan Eovaldi gave up a two-run home run in the top of the first to Austin Meadows.

Eovaldi was outstanding from that point on, allowing only one more hit through his five innings of work to go along with 8 strikeouts.

Red Sox leadoff hitter Kyle Schwarber got one back in the bottom of the frame with a solo home run to cut the deficit to one, 2-1.

The Red Sox took the lead in the third thanks to RBI singles by Kike Hernandez and Rafael Devers. Hernandez gave the sox a 4-2 cushion with a solo hime run in the 5th.

The Red Sox bullpen which was outstanding in the Game 2 win, was unable to preserve the leaf. Wander Franco led off the eighth with an opposite-field homer off of Hansel Robles. Later in the inning with a runner on third, Randy Arozarena lined a double to center to tie the score, 4-4.

Nick Pivetta got the win for the Red Sox after pitching the last 4 innings of scoreless relief. Pivetta was slated to be the Game 4 starter but that obviously will have to change. Game 4 is scheduled for Monday night at Fenway.