A New Dey On The Horizon: Bengals Ready To Seize Their Biggest Moment

A win in Super Bowl LVI will finally vindicate the Brown family. 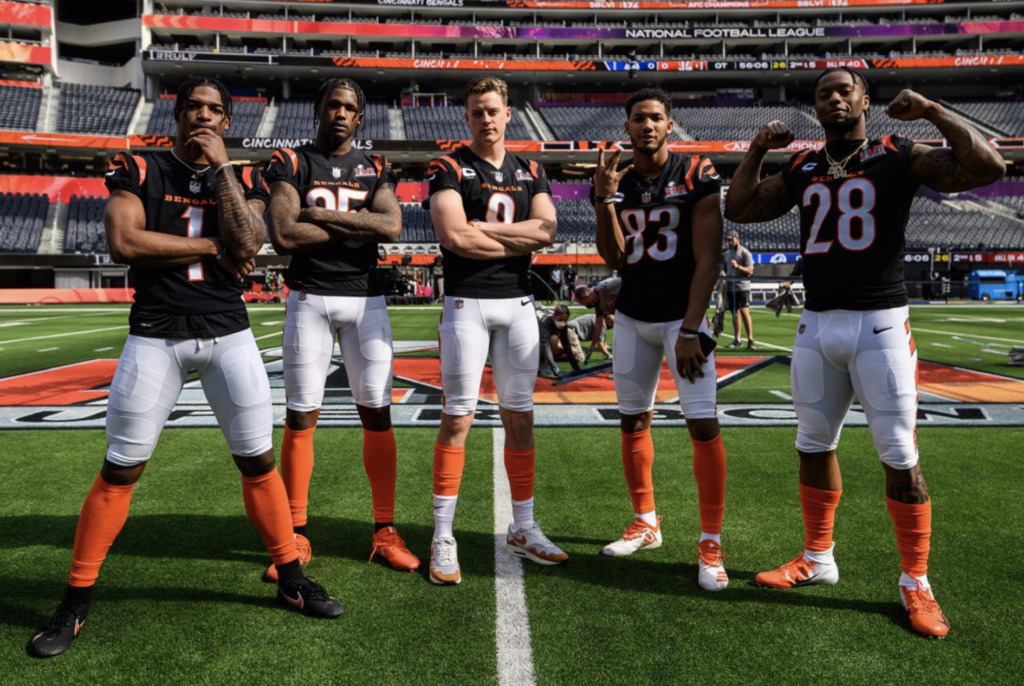 It is the advice I give every Bengals fan I have encountered here in the warm, beautiful sunny climes of Southern California.

Having covered 10 of these in my time in New England, they’re all different.

You never know if you’ll be back next year or in 33 years.

Today is the culmination of a three-year makeover of an NFL organization that many never thought was possible in Cincinnati.

But here we are. After the drafting of Joe Burrow in 2020 and the smart selection of immediately taking a weapon for him in Tee Higgins with the very next pick, the Bengals began the process of taking this organization in a different direction.

For all the grief the Brown family has taken for the way they have run their business in Cincinnati over the last 30 seasons since their patriarch passed in 1991, they deserve one big victory lap for what they’ve accomplished in the past two seasons.

They trusted that Zac Taylor was indeed the man to lead this organization to a “new Dey” and a fresh attitude after years alternating between irrelevance and mind-numbing frustration. No one is more qualified to speak on Taylor’s reformation than Darrin Simmons, the special teams coordinator who worked with Marvin Lewis and was retained when Taylor was hired in the days after the Patriots beat the Rams in Super Bowl LIII in Atlanta.

“It’s really changed a lot,” Simmons told me. “I think honestly having been with Coach (Marvin) Lewis and Zac (Taylor), they have very different styles. Marvin is probably more of an old-school guy. Zac is more new school. So, I say new school, it’s been great to be a part of seeing how you deal with players. It’s been different in the fact that Marvin was more of a head coach, and he really managed the whole team. He didn’t really call defenses that much. He had the defensive background.

“He didn’t call a lot of defenses, except for a couple of spots. Zac has to deal with calling offensive plays, trying to manage the in-game situations and trying to manage the whole team. It’s unbelievable how he can manage all that and show his capacity. It’s been really neat to be a part of and see all that. It’s unbelievable the way he (Taylor) deals with the players, the level of confidence he brings to our guys. Our guys trust him, our guys believe in him, and he’s really made great strides from 2019 to now. It’s really an unbelievable credit to him and how he’s really evolved and developed from that. And I’ve learned a ton from that, too.”

They silenced the naysayers like former Jets GM and Dolphins executive Mike Tannenbaum who said the Bengals should be removed from the league for gross negligence if they dared take star receiver Ja’Marr Chase over tackle Penei Sewell with the No. 5 pick last spring.

Bill Belichick was named NFL Executive of the Year for his remake of his dynasty behind rookie quarterback Mac Jones and a defense that was – in his vision – dominant in the first half of the season. The Patriots won seven straight to improve to 9-4. They were the No. 1 seed in the AFC before running out of gas and losing four of their final five games, including a 47-17 thrashing in the Wild Card round at Buffalo.

But the front office executive that pulled off the biggest turnaround in the NFL was – without a doubt – Cincinnati’s Duke Tobin. In the last two seasons, the Bengals Director of Player Personnel has brought in Vonn Bell, Mike Hilton, Trey Hendrickson, D.J. Reader, Larry Ogunjobi and Eli Apple and has turned the defense into a strength of the team to complement Joe Burrow and the offense.

Some never get over it. Some never get past getting butt hurt. That’s Carson Palmer. The quarterback went on a torment tour of Radio Row here at the Los Angeles Convention Center, warning current Bengals like Joe Burrow to be cautious and wonder whether the Bengals will be committed to investing in an offensive line around him.

Palmer’s time in Cincinnati did not end well with Mike Brown. We all know that. But read the room, Carson. Now is not the time to tear down what the Bengals have built. Even the Bengals most ardent critics understand that. That would be akin to Bernie Kosar warning the Browns not to get their hopes up on Nick Chubb because he could fumble in the Super Bowl like Ernest Byner. Silly and ridiculous.

“That takes its toll emotionally on you. And you never felt that way watching him play. He was cool, he was calm. The offensive line knew they’d find a way to win. They believed in him. They believed the defense would get a stop. There’s a great belief, a great energy, and that magic. And there’s just enough magic to get past this team with All-Pros and all stars, I hope.”

There’s going to be a lot more than just hope today at work. There’s going to be a franchise from Cincinnati that believes it’s their time on the biggest stage in professional sports. After 54 years, the time for hope is over. As they say inside Paul Brown Stadium, it’s indeed time to “Seize The Dey.”

And for Mike, Katie, Troy, Elizabeth and Duke, one more victory lap remains. And there will be plenty of Who Dey crazies lining the lower bowl after the game if the Bengals finish business today at SoFi Stadium.