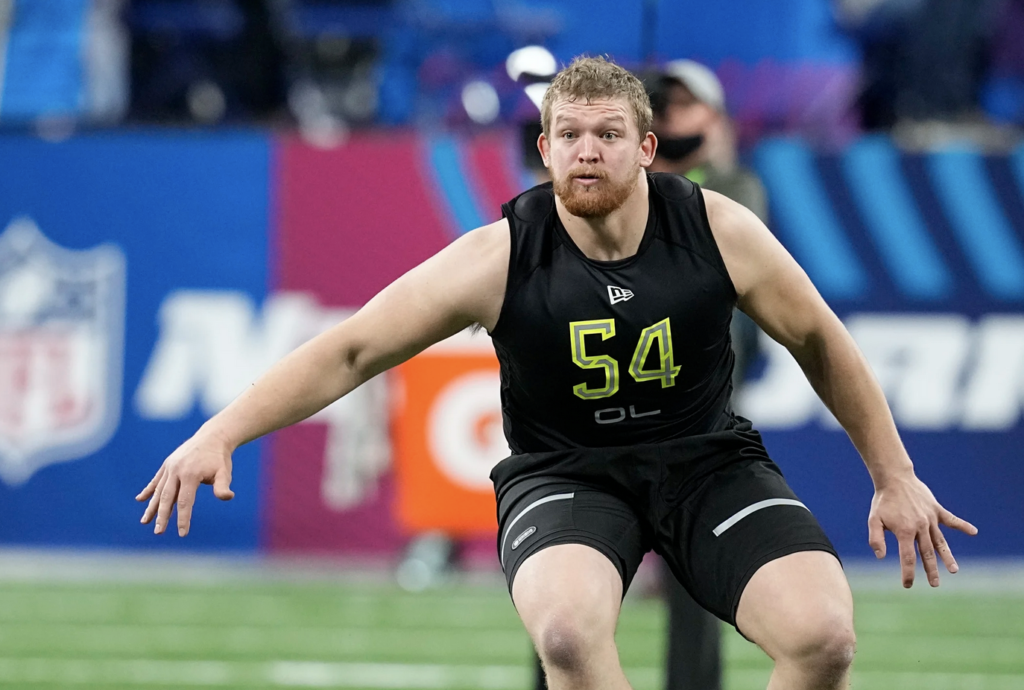 CINCINNATI – The remaking of the Bengals offensive line is complete. Will it pay off in better protection for Joe Burrow in 2022? Will it mean a more mature and stable situation in front of the most important player in franchise history?

The Bengals signed three free agents, drafted North Dakota State’s Cordell Volson in the fourth round and are bringing back several second-year linemen who figure to battle for the starting left guard spot.

Given the news that broke Thursday of sexual assault allegations against Jackson Carman, the left guard spot is anything but settled.

The Bengals will find their left guard and move forward, with or without the Fairfield High and Clemson product. Still, head coach Zac Taylor did mention him by name when considering options at left guard.

“We’ve drafted that position over the last couple of years,” Taylor said Saturday night in wrapping up the three-day proceedings. “We’ve got young guys like Jackson (Carman), guys like Trey Hill and Akeem Adeniji, and we just added one (Cordell Volson). So those guys get a chance to come in here and compete.

“A lot of them are in year two of the system, year three of the system, and we’ve got a rookie that’s coming in here too. It’s an exciting evaluation that we’ll have going forward here to see those guys compete. We’ll just see how it plays out. But you’re right, you feel really good about four of those spots, and there’s just inexperience there at one spot. But we do feel confident that somebody is going to rise out of that group and give us a really good guard there.”

Long before the damning accusations broke, there were serious concerns about whether Carman had the maturity and temperament to handle the rigors of the NFL.

That’s why offensive line coach Frank Pollack’s words hit so close to home when he went on and on Saturday about intangibles as a necessity of offensive linemen that make it in the NFL.

“This league is a son of a you-know-what, and to make it, you have to have some you-know-what in your neck. You have to have some grit, or you’re not going to make it. I’ve been in this a long time as a player — a horrible player (laughs) — and as a coach, and there are guys you’d see come and go that are so talented and have off-the-chart measurables and you’re like, ‘Man, how come that guy didn’t make it?’ Because he doesn’t have the other stuff.

“And I’m just talking offensive line. It’s critical. If you don’t have that, you have no chance. I don’t care how big you are, how pretty you look, how fast you are. None of that matters if you don’t have a little shit in your neck. That’s just the reality of that.”

I asked Pollack if he believes after all the changes this offseason the culture will be significantly improved.

“Yeah,” Pollack said. “Year 2 with me in the room (laughs). And the new additions in the room. I should’ve started there — it always starts with the players — but for sure the new guys we brought in the room. I love what the three guys we signed in free agency bring. That was like Line 1 for us. What they bring to the room is critical. What Volson is bringing to the room in that regard as well.”

Regardless of the Carman news, the Bengals are still intensely focused on bringing in the right players to a culture they worked so hard to build in the last two years. Volson checks all the boxes.

He returned to the North Dakota State for a fifth year of eligibility in 2021 due to the impact of COVID-19 on the 2020-21 season. He’s a three-time FCS All-American and All-Missouri Valley Football Conference first team. He appeared in a school-record 65 career games including 41 consecutive starts over his final three seasons. Most of all, he’s a two-time team captain.

Primarily a right tackle, Volson played all four guard and tackle positions during his career. He was part of five conference and four national championships during his six-year career. He helped NDSU post its top four single-season rushing totals, including a school-record 4,601 rushing yards in 2019.

“Just having a really blue-collar mindset about the weight room — showing up early, staying late, working hard every single day, eating right, putting on the right type of weight,” Volson said. “Our strength staff at NDSU did a really good job at that. You talk about adding two pounds a week, and just make sure we’re putting on the right kind of weight.”

After Joe Burrow, the next person who should be excited about the changes is offensive coordinator Brian Callahan.

“I can’t wait to see these guys get together,” Callahan told me. “It’s a collection of personalities that we’re really high on that we think are going to mesh together great. Between (Ted) Karras and (Alex) Kappa, those two have been in town and have already been working out. Those are the guys we are excited to see. LC (La’el Collins) will be here some point soon, and to see those guys get in a room and start to compete and build that camaraderie. And I think when you talk to Frank, one of the biggest parts of the offensive line is the way those five starters come together and the persona they take on together as a unit and as a room — it is really important.

“I think we’ve added the types of players that are going to contribute to bolstering that mentality we are looking for. I think that’s going to really raise the level of the guys in that room and get the best out of all of them. I’m excited for that competition to start. I’m excited for those guys to get together, and I can’t wait to see what our line looks like this year compared to what we’ve had in the past. I’m really excited about that. I think Frank probably feels the same way with the additions we’ve made. It’s exciting. I’m sure Frank can’t wait to get his hands on them all together, get to coaching and getting back on the grass. I’m excited. I think we’ve done a lot of great things for that room over the course of the offseason.”

Again, whether Pollack was directing this at any particular player or not, his words rang very true Saturday.

“Maybe I just reflect on my own experience because I wasn’t a very good player — how hard it was to play in this league,” Pollack said. “It’s hard. You’re going to have to overcome some adversity and work through some ups and downs. A lot of these kids have never faced that, so how are you going to handle it when it hits you right in the mouth, right? Nobody cares where you came from or what your college career was or how many stars you had. Nobody (cares) — doesn’t matter. You’re playing against grown (up) men, who are trying to take your job. These guys are married with kids. They don’t care if you’re some hot-shot, 22-year-old. You know what I mean?”

Pollack said he’s there to coach his players but not hold their hands, one of the first lessons young players need to learn.

“To me, as a coach, I feel like it’s my obligation to promote that because the men in the room that I coach now have earned the right,” Pollack said. “So, the new kid coming in, he’s got to earn the right to be in the room and compete with those guys. I’ve seen a lot of guys who can’t handle the business side. This is the best business in the world, and it’s the ugliest, nastiest, coldest business in the world.

It is what it is; get over it. Here’s a tissue, go cry in the corner and let’s go (laughs). If you can’t handle that, you’re not going to last. I remember back in my years, (there were) guys that come in the locker room, they couldn’t handle that. They were talented guys, but they just couldn’t handle the business. North Dallas Forty had a great scene in there about ‘I call it a business; you call it a game.’ I like sharing that scene with my guys because it’s both. You’ve got to understand it, deal with it and move on. It is what it is.”

The Making Of Bengals Championship Leaders In Offseason Practices and OTAs

Are the Patriots Switching to Shanahan-Style Offense?

Should the Patriots Move on from Isaiah Wynn?