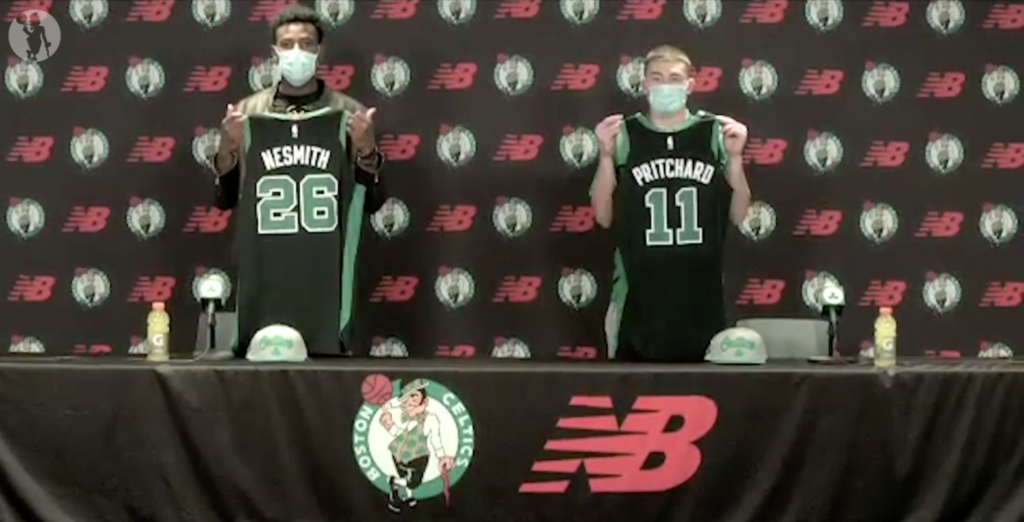 Aaron Nesmith and Payton Pritchard flew directly from their homes to Boston after being selected 14th and 26th respectively in the NBA Draft. They met with some early-arriving younger Celtics players and today received their jerseys — No. 26 and 11 — as they stand just over one week from the beginning of training camp.

It’s an unprecedented turnaround from draft night to the NBA season, expected to begin in roughly one month, as the entirety of the Boston Celtics expects to fill into the Auerbach Center next week. The roster is set once Boston’s signings become official, as Nesmith and Pritchard inked their rookie contracts today. Nesmith will make $2.9 million in 2021 and Pritchard $1.7 million. Second round pick Yam Madar is not expected to join the Celtics this season.

Nesmith, who broke his right foot in January playing for Vanderbilt, said he is 100% and ready to go for training camp, adding that his 52% three-point stroke from last season will absolutely translate to the league. Both he and Pritchard didn’t specifically project their roles, though both could see ample opportunity with Kemba Walker uncertain to start the season and Gordon Hayward gone for the Hornets with no roster replacement on the wing.

“It’s going to be a big jump for both of us going in,” Nesmith said. “We didn’t get Summer League, so didn’t get to get out feet wet.”

Otherwise, they mentioned the transition being fairly fluid as they’ve met Danny Ainge, the coaching staff and the players on hand in Brighton. Both players know several of their teammates already, Nesmith played with Jayson Tatum at the Nike Hoops Summit while Pritchard faced Jaylen Brown in high school and AAU. Pritchard also played with Carsen Edwards and Romeo Langford on the Team USA U-19 team in the Egypt FIBA World Cup.

Pritchard, asked about the history of No. 11 in Boston given its two most recent recipients, said it was simply his second favorite number. Nesmith will continue to use his number from Vanderbilt, where he played a pro-style offense under head coach Jerry Stackhouse.

He has received restaurant recommendations from his brother Eddie Nesmith, who attends Harvard University studying molecular and cellular biology

“The body of work. The repetition. For me, nothing changes,” Nesmith said. “My warmup doesn’t change, my form doesn’t change. My footwork doesn’t change. as long as I continue to work on those things and continue to perfect those attributes to my game, there’s not reason for my shot to not translate from one level to the next.”