Aaron Nesmith Not a Sure Bet for Celtics Rotation Early 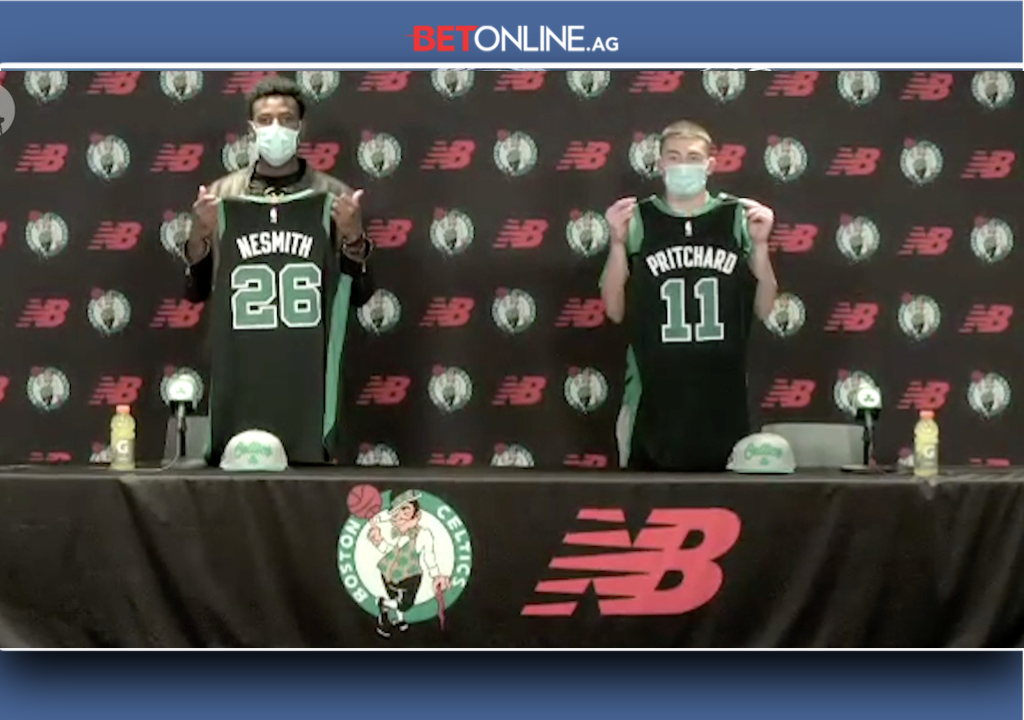 Six days after the Celtics drafted Aaron Nesmith, he arrived in Boston for an unprecedentedly quick turnaround with Payton Pritchard for their Celtics introduction. The rookies met Grant Williams, who coerced them to play the board game Catan, along with coaches and early-arriving veterans.

They could shoot and work out individually with coaches, but COVID-19 protocols prevented any usual group workouts between their late-November introduction and the first week of December, when Aaron Nesmith began five-on-five action for the first time with other pros. No Summer League, an abbreviated training camp and only two preseason games preceded Nesmith’s debut tonight against the Bucks — 35 days removed from draft night.

Brad Stevens did not include Nesmith, the No. 14 overall pick, in the Celtics’ first quarter preseason rotation. All rookies face a rapid turnaround this year, and most a long layoff from competitive basketball. Nesmith broke his foot in January, leaving him 349 days removed from his last action for Vanderbilt today — the third longest span between games among first round picks. Boston’s rookies both shrugged when asked to predict their roles.

“Nesmith hadn’t played a 5-on-5 game since January, until his first practice,” Stevens said in training camp. “Everybody’s asking me if he’s going to be in the rotation or not, and he was just trying to get up and down the court.”

Nesmith and Pritchard made sense as picks that positionally fit Boston’s two greatest losses to start the year. Gordon Hayward left the Celtics with an open starting spot on the wing. Kemba Walker’s injury allows secondary point guard minutes behind Marcus Smart. Based on preseason minutes, Pritchard could fit in the Celtics guard rotation due to his shooting and ball-handling.

“I don’t know about making an impact,” he said. “I think time will tell because it is a different level when you get out there with these guys on a day-to-day basis.”

The Celtics set roles over the weekend, something Stevens envisioned ending camp, though not necessarily in terms of playing time and who’s starting. Stevens instead approached the team with goals for the year and emphasized what their priorities are as individual talents. In two ugly preseason losses, he saw players pressing and perhaps trying to replace absent bodies like Walker.

Nesmith sat for the entirety of the first half on the bench against Philadelphia last Tuesday. He ultimately played 19 minutes in the second half, recovering around a screen to lay a block on Tyrese Maxey from behind. His first step-back three-pointer fell and he scored eight points on 3-for-8 shooting in his first NBA action. His competition came against enough Philadelphia rotation regulars to make it tape-worthy.

Stevens didn’t need replay to notice both Nesmith and Pritchard miss his calls from the sideline though, particularly on defense. They’d misidentify them, without enough institutional knowledge of the league to recognize them as another newcomer like Tristan Thompson may.

Both rookies played pro-style offenses at Vanderbilt and Oregon, but Stevens’ emphasis is always defense. Among his three prerequisites for rotation time listed in training camp, guarding made the list alongside limiting turnovers and “adding value to winning.”

“I called a defensive coverage or offensive play and they looked at me sideways,” Stevens said. “They didn’t know what i was saying. We’re going to have to work on that and get them a basic set of things that they can play with while they’re in.”

Nesmith and Pritchard currently show up one hour before each practice for extra instruction while Stevens and the coaching staff work to speed up the learning process. Pritchard said he read the playbook before camp started. Nesmith is working on his conditioning and catching up the speed of the game.

Positives rang out of his preseason tape. Nesmith drilled shots at difficult angles late against the Nets, nearly behind the backboard. His three point stroke looks fluid and consistent, with an ability to catch and shoot, work around screens in motion and shoot off the dribble. His strong physique and length also inspire confidence among coaches that he can pick up the defense in time.

That learning curve may leave him out of the rotation for now though. As the Celtics emphasize stability and winning as much as learning what they have early in the year, the rotation will likely tighten. It won’t eliminate spot opportunities for Nesmith and it’s easy to imagine him being the first option when adjustment time comes. Stevens is managing expectations for a lottery pick burdened by more than a rookie has ever faced, knowing where he’s at with his conditioning, adjusting to the pro game in record time and defense.

“Being tossed in pretty fast and having to learn pretty fast, the head spins every now and then,” Nesmith said. “It’s just how quickly and how well you can slow the game down, help your teammates out and help win games, make winning plays.”