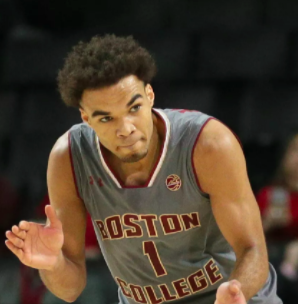 N.C. State wasted about 30 minutes falling behind double-digits. In the final 10 they wasted no time, anything Boston College did, they were there to erase it. The Eagles’ 14-point lead was gone and their every effort seemed to disappear.

Then Robinson made a jumper on the left wing. It seemed like anything N.C. State put up, they’d hit, and send BC home for good. Robinson didn’t let them put anything up. Leaping on the inbounder, Freeman, he grabbed the in-bounds pass in midair and sealed a stunning victory for BC.

For the first time since 2006, BC has won two games at the ACC Tournament. 24 points, and his vital steal, sealed a 91-87 win as the Eagles’ miracle season continues.

For Ky Bowman and Nik Popovic, their success in the hard pick-and-rolls that devastated Georgia Tech yesterday translated over. Instead of fatigue, muscle memory took over and Boston College stormed out to a 14-7 lead over N.C. State.

Jerome Robinson started the attack cutting in transition for a layup from Popovic, then swung a pass corner-to-corner to get Jordan Chatman a three. Markell Johnson lobbed a pass to Dorn, but a minute later running on the break himself Bowman stuffed his layup off the glass LeBron James-style.

Bowman, who neared a triple-double last game, embarked on an early scorching of N.C. State. Giancarlo Reyes kicked out a pass to him above the arc he drilled for three, then he spotted up for three more next trip down before driving inside to cap an eight point explosion in 70 seconds.

Popovic matched him at eight, rolling to the rim on the baseline for a lob from Robinson, then catching a pass for two from Bowman on the roll. A minute later, in a scramble for the ball, he fell and hurt his right leg. Trainers lifted him off the floor, he’d return, but for the moment the offense stalled.

Bowman bricked an elbow jumper, Vin Baker air-balled a three and passed into a turnover through three possessions.

Abdul-Malik Abu began tossing deep twos up, only hitting one and pushing a 4-0 run in the meantime with Allerik Freeman. Reyes, stepping in for Popovic, cut the Wolfpack off with a layup and offensive board. Sam Hunt poured in a three, but Popovic returned and Steffon Mitchell, Jerome Robinson and Bowman sparked eight points on buckets and free throws to get back ahead 33-25.

Hunt hit another three and following their next stop, Robinson carried the ball all the way to the rim in transition for a three-point play.

The Eagles built their lead up to 13, Mitchell hauling in another offensive rebound and finishing, then Robinson poured in another driving bucket inside. He started 4-of-8.

Shooting 51 percent in the first half and 36 outside, BC closed with two last hard charges in transition. Robinson hit Mitchell who fed lower to Reyes for a baseline dunk. Then Vin Baker tossed the ball over Chatman into the corner, he chased it down and nailed a three there, sending the Eagles into the locker room up 45-31.

N.C. State would force BC to push its lead, as they started the second half 6-of-8, with Omer Yurtseven pouring in six points in the first six minutes on post-ups. Chatman obliged with two quick threes, Robinson hit two tough 15-footer facing up in-between and Bowman finished a layup in transition with 12 minutes left.

BC led 63-49 as Bowman drove again on the run, getting to the free throw line as the Wolfpack slowed down for just four points in three minutes.

As Mitchell reached 14 rebounds at this point, BC held a 34-22 edge on the boards. Then Bowman hit another acrobatic layup and BC led 67-53.

Reyes continued to chip in, hitting two more shots around the rim to start 5-of-5 and Bowman hit another layup but the Wolfpack soon entered an offensive inferno.

Dorn hit inside, Hunt added one more three, Dorn poured in two layups and Freeman nailed a three on the left wing. They kept coming, Hunt with a four-point play on the right corner, Yurtseven with another hook off glass. N.C. State smashed BC’s defense to pieces with 18 points in just over three minutes.

The crowd reached a roaring level it hadn’t yet this week and the Wolfpack tied the game 75-75.

Boston College looked gassed, but ran one more smooth set that provided hope as Popovic handed off to Chatman on the right wing then rolled to the rim for a three-point play. Freeman swiftly tied the game at 80 with a spot-up three.

Then, in a moment that’ll define his near player-of-the-year season, Robinson delivered one last blow to the state of North Carolina he grew up in. Swiping the ball from Freeman on the in-bounds, he sends BC on to day three where they’ll see Clemson.