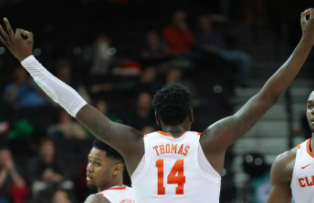 Ky Bowman needed 25 minutes to find the net in a week where he’d scored over 50 points between two games. Clemson took him out of the game early, so he had to find his way back.

He’d do it without the ball, rushing to the rim and leaping to rebound a three-point miss by Jerome Robinson with under 12 minutes left in the second half. He stripped Elijiah Thomas on the outside. Both plays resulted in turnovers for BC, but lifted Bowman from his slump.

Clemson topped Boston College 90-82 but not before Bowman pulled the Eagles from down 14 to within three in the final four minutes. He scored six straight to get BC there and 18 points in the second half after an 0-of-4 first. But Clemson’s 12 threes and cuts to the basket lifted them into the ACC’s final four.

“They just guard really well,” Jerome Robinson said. “Great on-ball pressure, and they iced a lot of the ball screens, and are just trying to take us out of our offense I think is what they did.”

Once again Boston College, for the third straight day, dictated the early pace against a team with a better record. Clemson grabbed three offensive rebounds in the first four minutes, and the Eagles regrouped on each one and finished stops around the basket.

The Tigers missed four straight shots, settling on the wings, as BC generated more rolling action to its bigs, giving Steffon Mitchell and Nik Popvic early plays around the rim that created seven of their 12 points on the way to a seven point lead. At the first timeout they had already shot six at the line.

That lead fizzled out of the first timeout, Shelton Mitchell hit a pair of shots inside and outside of the arc. Aamir Simms hit his first three in the left corner in between as Boston College turned two possessions over on the sideline. To take a 18-17 lead, the Tigers scored on six straight possessions.

“Even though we missed some shots early,” Clemson head coach Brad Brownell said. “I told our guys I liked our rhythm, I liked what we were doing, let’s just stick with it. I thought we hung in there defensively and did about as good a job as you can do on Robinson and Bowman.”

The next break led to the Tiger’s first second-chance points, a three by Anthony Oliver on the left wing, then Devoe added another on the right side. Far from its slow start, another eight point push capping a run of seven threes in seven minutes placed them up 14.

Christian’s squad hopped on the wave, tossing up threes to boost themselves back in to the game immediately. Robinson hit three free throws, Jordan Chatman hit a pair of bombs in both corners for a desperately-needed 9-3 run.

It continued with Robinson’s three and an inside layup by Mitchell, but Clemson had more answers. Simms and Mitchell hit a pair of twos around the paint and Oliver canned Clemson’s ninth three of the half, securing a 43-36 advantage 20 minutes in.

Bowman and Robinson, who started 1-of-9, continued to be hedged out of the game in the opening minutes. Robinson tried to kick back to Popovic around his high screen and Devoe grabbed the loose ball and took it for two. He drilled a three next time down.

“We know they can shoot the ball well,” Devoe said. “They played three games in three days. We knew they would have a little tired legs, so just trying to get out in transition.”

Devoe poured seven points on BC in the first four minutes, Elijiah Thomas cutting off a Popovic roll with a block then foul inside. It took Bowman five minutes to hit his first shot of the game on the left baseline, with his team behind 52-39.

Shortly after, he’d try to rush to the left corner as a kickout hit Mitchell for Clemson’s 11th three-pointer. Bowman’s layup fell short, but Giancarlo Reyes cleaned it up. Still down double-digits, Bowman and Robinson ran a set around the elbow for the latter to get into his scoring area but he got cut off by multiple defenders.

Robinson would have to step back on the left wing and hit a three on his own accord just to stick with another bucket inside by Reed. Christian pulled his guards aside for a quick chat, and they set up Chatman inside for two more. But they quickly got beat again inside by Thomas, cutting behind everyone for a dunk.

Robinson hit back with another three. Bowman, in short order, joined him on the attack with the paint now available.

In rapid succession Bowman crossed over at the top of the arc and drilled a three. He broke to the right corner after getting stuffed by Thomas inside, and hit another three from Robinson. As Skarra caught an inside feed at the basket, Bowman blocked him rising up for the layup. The string of plays pulled BC within three points.

“We knew they were going to make a run,” Clemson’s Mitchell said.

Then BC’s Mitchell, eyeing Reed staring down Oliver in the corner, timed his jump and just missed cutting off the pass. He looked behind him as Oliver sank a 12th three for the Tigers.

“Oliver came off the bench, and eight minutes hit three threes,” Chirstian said. “I think he’s hit four on the season. So again, this is that time of the year when guys have to step up, and if they do, they become more difficult to guard.”

Mitchell scored four points in the aftermath and Thomas flushed a put-back dunk in, placing Clemson right back up 10.

They’d stay there as time ran out on Boston College’s run, a miraculous season that ended with a run that involved the whole team. Clemson, missing its second leading scorer for the season, moves on to the final four of the ACC where they’ll play #1 Virginia at 7 p.m. tomorrow.

For BC, a chance to play in the NIT awaits, which Christian called a reward for what they’ve accomplished, 19 wins and eight in conference.

“Our belief in ourselves and in each other is what’s got us this far,” Robinson said. “Our culture has definitely changed.”