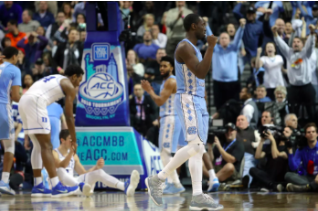 It was about his flagrant one foul on Cameron Johnson, dubbed by one media member as a “butt bump.” Allen had just missed a shot in the high post with one minute left in the first half, Kenny Williams scored running in transition to put Carolina up 32-27, but in the back court Cameron Johnson went crashing into the hardwood.

Allen, notoriously booed across college basketball for his tripping incidents in years past, appeared to stick his hip out and check Johnson as he ran back in transition. The refs deemed it flagrant, allowing UNC to add two more points to their transition layup.

UNC carried that momentum into halftime, up 36-31 and eventually winning 74-69 following a dominant second-half and chaotic finish Roy Williams had never seen before. His team now moves on to play #1 Virginia in the ACC title game tomorrow.

“Yeah, they got a fast break and I bumped him and fouled him,” Allen said flatly.

Then head coach Mike Krzyzewski jumped in, “I was surprised there was stoppage. But we’ll go with the call and move forward.”

Coach K said the play did not decide the outcome of the game, Allen didn’t respond when pressed about UNC’s Garrison Brooks’ locker-room statement that Allen’s foul was not unintentional.

Instead, Krzyzewski shut the controversy down.

“You don’t want any foul in a game,” he said. “So that was another foul in a game. Do you think that that was the only time someone was hipped in the game? If you look in the low post, that’s going on all the time, so it happened at half court, they got it, it’s done.”

What did determine the outcome were a sporadic few closing minutes when the Blue Devils returned from a double-digit deficit that the Tar Heels mounted on them with overwhelming second-half offense.

Over the final five and a half minutes Allen nailed two threes, Gary Trent added another, Marvin Bagley swished a pair of free throws and Wendell Carter scored inside from Allen two toss a 72-56 Carolina lead in the trash. Duke pulled within three, but with four fouls on Allen and 11 seconds left they needed some help.

They pressed full-court, forcing Johnson to dribble across pressure and as UNC tried to move the ball around to escape pressure a tough pass flew at Theo Pinson on the sideline. He caught it, Allen stood in front of him and could have fouled, which would have been the end of his night, but Pinson fumbled the ball out-of-bounds.

So instead, Allen lined up to take one of the biggest shots of his career, but heavy pressure on the left wing forced an errant heave three that didn’t come close to landing.

“We had a chance to draw something out,” he said. “I had a ball screen from the big on both sides and was trying to get a three off to tie it up. Initially went for the pump fake to try to get him in the air, but he didn’t commit to come foul me, so then tried to get up a shot up towards the rim, make it, or hopefully one of the big guys would get a rebound.”

Coach K said UNC switching defensively around the screens did the play in.

On the UNC side, Joel Berry and Pinson said they held no ill-will toward Allen. Berry, visibly chatting at half-court during the flagrant free throws, said him and Allen have a good, long-standing relationship.

“I told (him), they’re always going to get on him about that,” Berry said. “Any little trip he does, if he puts a finger on somebody, you know they’re going to react. So it’s always a joking thing with me and Grayson. I don’t have any hatred towards him. We’re good friends. We’re both from Florida, and we played with each other. But I just told him that you’ve just got to watch yourself because anything you do like that you know they’re going to get on you about. That’s why we laughed it off.”

Pinson closed the game at the free throw line, saying he felt extra pressure to convert there after the turnover that gave Duke the final shot in the first place. Now they’ll move on to Virginia, a top-tier offense crashing into one of the best defenses ever to decide the ACC.

“Luke loses a dribble on the baseline. Theo drops the ball out of bounds. Kenny is coming to pick up a loose ball in the backcourt one time, I’m screaming no, no, no, because their guy clearly threw it backcourt and he falls and knocks the ball out of bounds,” head coach Roy Williams said. “You can’t make that crap up. It’s just something that happens … I’ve never seen anything like that.”

Now, they’ll face 20 second possessions defensively and a swarming defense that Williams called a coach’s dream, having gone from unranked preseason to number-one.

“We’ve got to be tough enough to bend our knees and stay in a defensive stance long enough to get good shots from all over,” he said. “We’ll have a chance.”

They’ll tip at 8:30 to decide a new champion of the ACC with Duke eliminated,