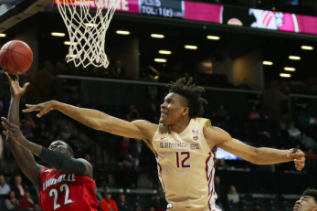 David Padgett’s overseen turmoil, success and a 3-7 stretch to close the regular season in a year where he unimaginably became head coach of a program Rick Pitino became the face of before his exodus midseason.

He’s attempted to create a smooth ride through rocky waters but nothing’s gone that way. A 66-62 lead with 0.9 seconds remaining capsized into a 67-66 loss against No. 1 Virginia as part of a disastrous close to the season.

Louisville nearly lost a 25-point second-half lead to Florida State in the Cardinals’ first ACC-tournament win. The Seminoles pulled within eight with two minutes remaining, but a rebound slipped Braian Angola’s hands after a missed free throw and allowed Deng Adel to slam the door shut with a shot on the left wing. He scored 15 points on 6-of-13 shooting as Louisville escaped and earned itself a fitting rematch with Virginia tomorrow.

The 8/9 matchup featured even records, two teams with adept offenses that spread each other out and rushed from end-to-end in the opening minutes. Ray Spalding hit 3-of-5 in the first eight minutes, pushing Louisville ahead 10-6 in a game it needed to retain NCAA Tournament hopes.

But nothing’s been simple David Padgett’s group and neither was their opening tournament game. One second he clapped, the next those hands were in his face as Dwayne Sutton’s steal on the defensive end turned into a turnover seconds later and two points for Trent Forrest and Florida State.

P.J. Savoy used a pair of Cardinals turnovers to open up his three-point game, nailing the second try on the left wing through a foul and lifting the Seminoles to a 17-14 lead. But FSU’s defense stalled out immediately after.

In rapid succession Deng Adel and Spalding ran a give-and-go at half-court, Adel drove inside and the ball swung to the top for a Quintin Snider three. Sutton drove for two, then Darius Perry nailed another three as Louisville ripped off eight points in just over one minute.

Spalding and Adel launched the run even further, trading threes as the Cards defense blocked, turned over or forced misses on 12 of the ensuing FSU possessions. The Seminoles pulled one point out of a free throw trip by Khrist Koumadje and two inside looks from Mann.

But from the eight minute mark to the halftime buzzer, Louisville unloaded open looks outside, exploded into the paint at will with Anas Mahmoud controlling that area offensively and outscored FSU 27-5 over the final 12 minutes.

Ryan McMahon provided the final three, catching a pass across half-court by Snider and nailing his team’s sixth three on the corner. At halftime they led 41-22, with a 48-26 field goal percentage advantage.

The small-ball, rapid-fire pace slowed into a battle around the rim momentarily to open the second. Koumadje, Mahmoud and Mann traded four shots around the rim but once again Louisville ate up Florida State’s transition defense.

To cap a 6-0 run, V.J. King rushed the floor for a layup and dunk on a lob from Adel and the Cardinals built on their halftime advantage up 25. Minor runs did little to quell the damage, Savoy hit two threes in both corners in 90 seconds alongside a dunk, but Louisville scored in between the three makes then added a three with 12 minutes remaining from Deng Adel.

Forrest and Savoy pushed hard inside to keep the deficit at 20, as Snider created seven straight points for Louisville personally, they responded to each basket. After a four point Mfiounda Kabengele push and another layup inside by Forrest after FSU got hit with a baseline offensive foul call, the Seminoles worked with 16.

Phil Cofer hit two massive spot-up threes, necessary as Louisville kept responding with twos inside, and Savoy added another in-between. A nine-point Florida State rush in 90 seconds reeled the lead down to 12, but a five-point response by Darius Perry for Louisville kept the Cardinals safely ahead.

The Seminoles had to begin stealing possessions and did, Kabengele cleaned up a missed three inside, Cofer put back a missed free throw and Kabengele buried a dunk on the run after blocking Spalding inside on the other side. “Gotta keep working,” Hamilton yelled in the huddle Seminoles fans and their bench roared for the first time since early in the first half down 78-68.

Louisville escaped on Adel’s final shot, narrowly escaping one final and massive blow that would’ve torn their tourney chances to shreds. Now, they can solidify it with a chance to get back at Virginia for their earlier, devastating collapse.