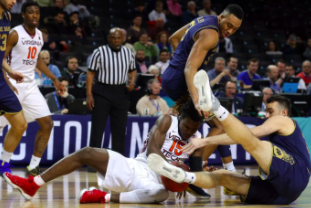 The Hokies paced, facilitated and finished for 30 minutes until Chris Clarke shoved Matt Farrell after a charging call in the second half with eight minutes remaining.

Farrell had worked Notre Dame back from down 21 to within eight, and flew backward on the baseline into the row of cameras behind the basket. He made sure to show them, and the refs, that he got pushed and forced a tech call on Clarke.

He’d seal a historic comeback win for the Irish at the free throw line, pumping both fists as he lifted himself from the hardwood. Colson hit the game-winning three on the right wing after starting 1-of-10, but Farrell’s play-making and presence in almost every play sparked the comeback and a 71-65 win.

Virginia Tech scrambled defensively to find and double Bonzie Colson whenever he grabbed the ball. They first took him off the ball, then dismantled Notre Dames offense and later in the half turned it into an abundance of misses and turnovers. Colson shot 1-of-10 in the first half.

While Virginia Tech flourished, opening with a Justin Robinson three in the corner, the Irish struggled to finish open shots on the perimeter they found routinely. The Hokies started 3-of-7 outside and got Robinson three free throws in the opposite corner. For the moment, they still trailed.

Rex Pflueger dished out the Irish’s best run of playmaking with a made jumper and an assist to TJ Gibbs. Virginia Tech trailed closely, Nickeil Alexander-Walker scoring in transition for one of many transition makes for VT to draw within 15-13.

Chris Clarke handed them the lead shortly after, converting a layup on a feed inside before he hit a jumper through a foul next possession.

Colson continued to miss shots around the rim, or get taken off the ball in doubles. Ahmed Hill drilled another Hokies three, while Notre Dame missed seven of their first 10 attempts outside. They blew the game open with consecutive running layups from Robinson, while Matt Farrell missed another three and his on-point passes across the half-court did little to generate offense as the Irish started 6-of-20.

As Colson missed a one-on-one look in transition, euro-stepping and missing off the back rim, he stood in frustration as VT again took off in the other direction. A few possessions later, as the Irish tried to feed it to him inside, Clarke cut in front of him to steal the ball and score again inside.

By halftime, Virginia Tech built a 13-point lead and emerged out of the locker room running even harder.

Alexander-Walker and Justin Bibbs turned an early stop and steal into two buckets on the run to begin the second half. Mike Brey called a timeout 90 seconds in and they created a make for Colson that Kerry Blackshear quickly erased with a three-point play.

Gibbs found Farrell in the corner for a three, but Robinson created three layups passing the ball into the post to further bury the Irish 47-26.

Blackshear hit five shots in a four-minute stretch that further solidified the Hokies’ control through three quarters. P.J. Horne followed him on a pair of tip shots around the rim that bothered Notre Dame.

Halfway through the second, Colson and Farrell drilled threes and assembled their first real run back. Martinas Geben scored six points on an 8-2 run prior, and Notre Dame emerged within 11.

Farrell swung right to Gibbs, who hit a three he missed earlier on the wing and made it an eight point game with nine minutes left. Virginia Tech went cold for two minutes but they grabbed an offensive board and Pflueger dropped the second chance rebound out on the baseline.

Then the refs hit Clarke for a T for his shove on Farrell. He’d drain two free throws, then Gibbs hit two more. It was a game again a four, but Bibbs added three more for VT in the left corner and Robinson hit two free throws on a three-point foul.

But the Farrell-led run rolled on, Gibbs drove and tossed back to Pflueger on his left for a three that got them back within four, but Colson missed a one-and-one free throw.

He’d come back and rebound a miss by Robinson inside on his back on the ground, but as the Irish pushed in transition the referees stopped play as Robinson reeled on the ground behind the play. He laid there for several minutes as Notre Dame players raised their hands in frustration at play stopping.

The third double-digit comeback of the day pulled within two points as Farrell found Pflueger cutting inside. Tech led 59-57 with two minutes remaining.

Next trip down Colson, struggling mightily to start, spotted up for three on the right wing with a hand in his face and buried it. He shot 3-of-4 in the second half and hit two free throws into the double bonus after to put the Irish up 62-59.

Farrell sealed it on the line, the second upset of the day, and first comeback to go the distance in the tournament. Robinson slammed the ball on the baseline after a final travel call, Colson batted his chest victoriously. The Irish earned themselves a date with Duke tomorrow night.