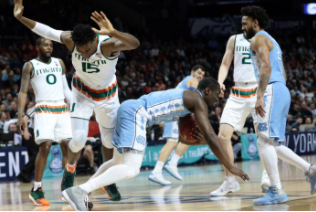 So many buckets, hard knocks at the rim and leads traded between Miami and North Carolina on Thursday night. A fan called out “this is street ball.”

Theo Pinson brought it back to fundamentals. Two massive threes in the final stretch, a dive on a loose ball and two feeds that set up Kenny Williams to push a 10 point lead, rebounds and a few blocks. Yesterday he made Roy Williams rip his jacket with a shot in clock-killing time; today, as Miami threatened late, he crushed the clock with his play-making.

North Carolina overcame a 14-0 start and won a high-paced game, 82-65, behind Pinson’s 6-of-7 closing effort in the final 15 minutes. Ja’Quan Newton kept Miami alive with a 4-of-6 finish, but Pinson’s impact set a tone so loud a tightly-contested game looked like a blowout on the scoreboard.

“I’ve said many times he’s a play maker and in some ways maybe as good a play maker as anybody I’ve ever coached in 30 years as a head coach. Everybody wants to talk about the dunk, but I like the way he sort of read the defense. There’s a lot of guys on the street corner that can dunk, but read the defense and see what they gave him there was sensational.”

Three North Carolina players tipped the ball around the net in the final seconds of the first half. They and Miami had traded buckets for the last three to four minutes, stealing leads back-and-forth evenly.

At the beginning of the half, they’d look up at a 0 on the scoreboard for over six minutes. Miami showed up and they didn’t. Ja’Quan Newton hit Dejan Vasiljevic in the corner for three on a drive to the rim, then Lonnie Walker found him for three more. Newton finished a left-handed layup and the Hurricanes soon led 14-0.

Williams went to his bench, his whole bench through the end of the half, seeking a counter to the energy Miami opened with and found it with rim protection.

“At the time-out I told them, and I really meant it, let’s give these five guys a chance and if they don’t turn around and start playing better then I’ll put you back in and let them sit the rest of the half,” he said. “I really meant that.”

Seventh Woods took two fast breaks on the run for open dunks, opening up UNC’s scoring. Garrison Brooks blocked a shot inside, sending Sterling Manley out for a dunk. Then Manley stuffed another Miami layup attempt inside.

A quick bench spurt of five bench points and two blocks got the Tar Heels on track, then Kenny Williams drilled a three and Joel Berry a layup to pull right within a possession.

With six minutes left, Brandon Robinson flushed a three and UNC was up 20-19. From there the pace picked up, both sides responded to each other. Newton’s two and Rodney Miller’s tip-in pushed Miami up again. Williams, Miller and Theo Pinson all scored in succession. Walker, Manley, Dewan Huell.

Through it all, the Hurricanes had the extra basket to pace ahead until Cameron Johnson drew two huge fouls. He flushed five free throws in the final minute, including a heave at the buzzer that got called for three shots. UNC swept a 32-31 lead at half, drawing Miami coach Jay Larrañaga’s ire.

“What ends up happening is when the game gets very fast, your mind needs to slow down,” he said. “You can’t have your mind going fast forward while you’re running at top speed because eventually you’ve got to make a decision, and at the end, we weren’t making good decisions at top speed and they were.”

Johnson’s run surged into the opening minutes of the new half, hitting a layup and put-back to extend to nine points in a four minute span. He’d exit with an injury shortly after, but the buckets didn’t stop.

Chris Lykes put his head down and began driving deep into the post, opening up Anthony Lawrence for two threes and a layup on three straight possession. UNC, forced to answer an 8-0 run, got all of it in a row. Pinson hit at the rim, then Berry on a second chance possession, Williams and then Berry all leapt on Miami’s interior to match the streak at 9-8 and stay ahead by one.

A flagrant foul on Berry wasn’t enough for Miami to regain a lead, splitting the free throws and leaving the middle open for a 4-2 run by Pinson and Brooks.

Then Newton and Berry engaged, trading two points, before Berry buried a edge-setting three on the left wing. Newton responded with a leaning shot in the post, but Miami got stopped twice at the rim after Brooks’ layup.

UNC built a five point lead, and Williams smartly chased down and fouled Newton on the run. Pinson, Newton traded makes, but Pinson hit the big one after, a three off a feed from Berry. North Carolina’s lead grew to 64-56.

Williams said he was happy Pinson took the three, and that as he’s grown more engaged defensively his offense grew this year.

Walker threatened, Newton drilled a three and Pinson had to make another play. On the right wing, he drilled a three, once again offsetting Miami’s push.

That established control, starting with the transition foul, gained UNC the cushion it needed. Pinson wasn’t done, two feeds out of stops set Williams up to create a 10-point lead with two running layups. He’d hit two free throws in the finals seconds and closed the books on Miami’s stay in Brooklyn.

For the third time this year, Duke and North Carolina will meet with a trip to the ACC title game on the line at nine tomorrow. The teams split their two regular season meetings and Williams said that, despite Duke moving toward and one-and-done model, “everybody loves talent.” He said he recruited Jayson Tatum, Harry Giles even though he’s old school for enjoying long stays.

“I’ve been here four years,” Pinson said. “It’s a big-time game. Everybody and their mama is going to be watching the game tomorrow.”