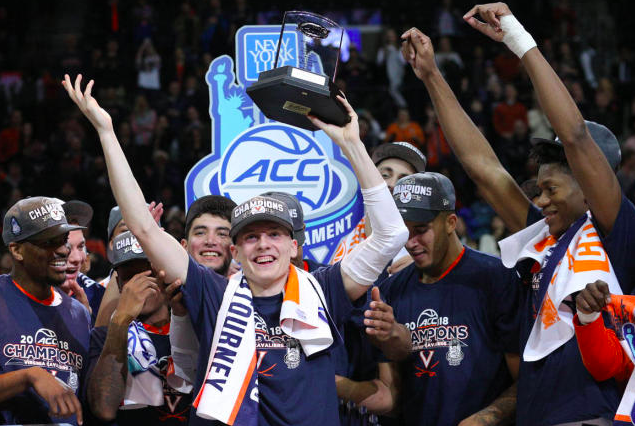 NEW YORK — A smile remained stuck on Tony Bennett’s face. One he couldn’t remove all the way to the podium. It’s hard to trust a favorite in March Madness. His looks different.

The smile may have been the result of winning the ACC Championship, Virginia’s second in four years. It could have been Joe Harris and others from the 2014 title team witnessing another live, he bragged about that all week.

The real answer may have been the cookies, one of the massive ensemble of Cavaliers fans delivered them to him. “Thank you for the cookies,” he yelled into the crowd as he walked off the blue-and-orange confetti-filled floor, “they were so good.”

Kyle Guy exited far ahead of him, hoisting the MVP trophy of the tournament that Virginia won by defeating North Carolina 71-63. The MVP could have easily been Theo Pinson, electric as a playmaker all week, but while Guy unloaded jump shots with a lightning-quick release, Isaiah Wilkins cut Pinson out of the game. Even Wilkins could have fit the bill, or Ty Jerome, who scored 12 points with 6 rebounds and assists.

All that mattered is that UNC’s offense, regularly scoring above 70 points in a game, sat in the low 60s like almost every opponent the Cavs have faced this year.

“We don’t care, Jerome said. “Who was scoring, who was MVP. No one cares, it’s all about the team.”

He several times called UVA’s dominant run, 17-1, through a conference marked by upsets this year a step in the right direction.

That progress began when Wilkins greeted Pinson at the top of the arc. He smacked the ball out of Pinson’s hands, ran to the other end and flushed a dunk to give Virginia a 7-5 lead it would not surrender.

North Carolina stuck around and never allowed the Cavaliers to build a 10-point lead it mustered over its earlier opponents, Luke Maye’s shooting kept them competitive, but players afterward expressed the Virginia conundrum. You’re down one or two possessions, but it feels like more.

“Before the game, Coach writes on the board, backpack and rebounds,” Guy said. “I like to say put your backpack on and rebound. And when we do those things not give up transition points, and in the pack and rebound, we can feel the energy going our way when we are at our best defensively.”

That pack line emphasizes a group that has no one-and-done players. Duke, North Carolina, once again built on rosters of future NBA impact players struggled to come close to matching the slow-pace assertion Virginia’s system, with its players all bought in, set over games all year.

The Cavaliers broke their all-time program wins record in 2017-18, but Devon Hall said afterward that’s only a good first step.

“We know who we are,” Wilkins said. “I think that’s something that we have to do, so we don’t have … a really big margin for error … we don’t have any one-and-done guys or anything like that. As older guys, you develop over the years from going to playing, like five minutes my first year to now, and you grow. I’ve grown with Devon over time like that, so I think that’s our way. It’s not going to be questioned or changed, unless you’ve got any plans, Coach.”

Today, Selection Sunday, nearly a dozen teams will quiver over whether they’re in or out of March. Plagued by inconsistency, the bubble’s massive this year. Far from the top, where the Cavs enter March Madness undisputed top dogs in the sport. They’ve entered every game aggressively, exemplified consistency and locked down opponents for massive percentages of games.

Playing in Charlottesville, 272 miles from where they’ll likely begin the road to the national championship game, they play in the same city where a white nationalism rally ended with a counter-protestor killed in a deliberate attack in August.

With that as a backdrop, they’ve tried to deflect that division, within their own team, emphasizing their own unity.

“I think it’s the greatest example. And like they said, there’s love here. There’s family, there’s issues we’ve got, but it’s a beautiful thing.”