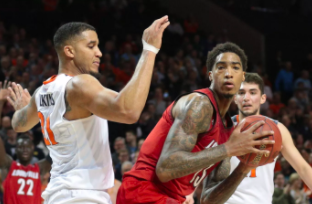 Only one Atlantic Coast foe topped Virginia this season, Virginia Tech, but Louisville’s drawn as close as consistently as anyone. Thursday was their shot to avenge their infamous loss in the final second last time the two faced.

The Cavaliers have treaded along a similar storylines from mediocre expectations through a rise to ranked status all the way up to their #1 ranking in college basketball. Opponents reach within arm’s length, but possession-after-possession they rapidly reduce the number of possessions remaining.

The Cardinals trailed by double-digits most of the afternoon in a 75-58 loss to Virginia. But they had an opening down four with nine minutes remaining. Over the next eight, the Cavs’ defense consolidated the number of sets they provided and choked the life out of Louisville.

“The possessions matter,” Virginia coach Tony Bennett said. “We’re a possession-by-possession team. That doesn’t change. I don’t know if that sets itself up for (tournament play). But records are out now, and it’s just teams can play at a high level. You saw Pitt play Notre Dame close. You saw the swings in the Virginia Tech-Notre Dame game, so you just try to lock in. Louisville made one against us. I think our guys understand how we have to be.”

Isaiah Wilkins tipped out rebounds, the pack line cut off the perimeter and drew out the Cards’ shot clock, only allowing Louisville to attempt six shots in the ensuing eight minutes of play. Even as close as two possessions away, Virginia’s emphasis on drawing the pace of play to a standstill ruptured David Padgett’s team’s chance.

Free throws were there for the taking, but buckets were out of the question. Four points became harder to muster for when they only grabbed nine possessions over eight minutes. Instead, the game went the other way, and Kyle Guy rose and dunked for a vital three-point play during that stretch that put Virginia back up double-digits.

Though the status of the dunk was in questions after the game.

Bennett laughed, whether or not it was a true slam clearly a question in the locker room. Bennett called it a squeak dunk.

“I did dunk it, I told you,” Guy said to Devon Hall to his left.

“I don’t even think that Adel fouled me,” he admitted. “I felt like I got fouled before that. But once I heard the whistle I just tried to get it up, and fortunate it to go in. On the dunk, if I wasn’t on a game play, I probably could have done something a little more special than that, right, buddy?

“Or been a good teammate and handed it off,” Hall shot back. “But it is what it is.”

Virginia hasn’t sweated much this year. On the offensive end, fun debates like whether or not a key basket was a dunk is the biggest question Bennett’s group has faced. Engrained in a complicated scheme defensively, he grants creativity to his offense.

They’ll be a one-seed in the NCAA Tournament, where expectations now await, but first they have a legitimate chance now among the final four to win the ACC, a conference long owned by North Carolina and Duke.

“As good as their defense is,” Louisville coach David Padgett said. “yoI think their offense is very underrated, and they shot the ball well tonight. They exploited us in a couple mismatch opportunities, and it seems like every time we got a little momentum, we just ball would drop out of our hands, they’d get it laid in, or they just would hit a tough shot at the end of the shot clock.”

Clemson’s coach Brad Brownell later said, despite Virginia’s scheme getting a bunch of hype, their players that run it have gone underrated.

Virginia’s Wilkins was named ACC Defensive Player of the Year for the 2017-18 season.

The Cardinals move on to Selection Sunday, Bracket Matrix averages them as an 11 seed in the tourney field after their win over Florida State on Tuesday. Padgett touted a hard schedule (14 Q1 games, four wins) and his players overcoming the Rick Pitino departure before the season as points in favor of their candidacy.

The Cavaliers move on to play Virginia, who they held to 36 points back in January. Brownell credited that, in part, to losing his second-leading scorer days prior.

“They just do everything really well,” he said. “They’re unbelievably sound. Tony obviously is as good a coach as there is in our game. I think sometimes Virginia, because they play slow on offense, they don’t get enough credit for how good their players are. I think sometimes everybody gets so into their scheme, but you don’t win 17 out of 18 ACC games unless you have really good players. And they’re big, they’re athletic, and they’re obviously very sound fundamentally.”