ACC Tournament: Virginia’s unflappable defense on to the title game 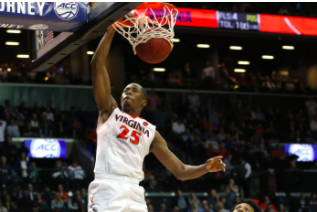 “Anybody who has to watch this for 40 games a year needs a f—ing raise,” said a media member crossing out of halftime.

He had just witnessed what teams across the ACC have crashed into all season when they meet Virginia, the pack-line defense. The sight of it symbolizes near-certain loss and inevitable control over the pace of the game.

It even took them two timeouts in succession with 26 seconds left to get their final in-bounds across. Everything, as it has been all year, happened slowly and methodically on their way to victory.

Once again, a team saw early success and a late run against it. Momentary success never overtook the whole body of work. Virginia’s bent plenty, but broken only once (and they still almost won that loss) as they roll on to the ACC title game with a 64-58 win over Clemson.

“They’re extremely big, long and athletic,” Clemson head coach Brad Brownell said. “I don’t think people realize — like they’re bigger than we are at almost every position. Every position you look at their guys and look at our guys, a couple inches difference, five to ten pounds, strength. And that’s true of a lot of teams that they play against.”

It’s no fun to many watching, but it’s brutally effective. On a night where Duke and North Carolina, long kings of the conference, dueled in the nightcap, Virginia’s built a throne atop college basketball by throwing flashy basketball in the trash.

Clemson dug into them early, setting the edges with three-pointing shooting to allow Gabe DeVoe to enter the post on dribble-drives and finish inside. The Tigers built a seven-point lead in the first ten minutes and hit two early threes, but in a sign of unavoidable carnage to come, Virginia held a six shot advantage in FGA.

Over the final 9:33 of the first half, the Cavaliers cut off any chance of Clemson making a shot. All the Tigers mustered were three free throws on a corner three-point heave, a call that elicited a shout from Isaiah Wilkins, their defensive centerpiece. “F—,” an explicit sentiment that underlined the perfectionism of that unit in the midst of a 19-3 run to close the half up 32-23.

“They do a good job on ball screens,” Devoe, who shot 3-of-9, said. “They’re always in good positions. Just make you make tough shots. I had a couple good looks, and they weren’t able to go in today.”

Stagnancy is rare on the pack line during its best runs of stops, Mamadi Diakite kept his feet shuffling as he manned the right wing on defense, steps from the free-throw line. Ty Jerome sprinted around him to pick up Aamir Simms as the ball swung to him up top. Simms tried to break into the paint, where they’d been successful before, but Diakite rotated in and cut off Clemson’s offensive life.

Jerome picked up the miss, pushed across half-court, and eventually Kyle Guy buried a three on the left wing.

“You can throw it inside and he’s so quick off the floor and he can manufacture some interior scoring,” Virginia head coach Tony Bennett said of Diakite.

“Then it loosens it up for our perimeter guys. He’s quick defensively, so he’s coming in the right direction. He’s still kind of new to the game, and every experience he gets is valuable. But for sure interior scoring, inside out balancing it is big.”

That full-court involvement, while emphasizing the heart of the defense on the interior is at the heart of Virginia’s defense, that happens to grind out full shot clocks and cut down on possessions per game. Over the final 9:33 of the half, Clemson ran just 14 sets on offense.

The Tigers regained a semblance of stability behind Thomas, planted in the post. He jammed into the middle for two layups, hauled in a missed three off the boards, turning and hitting a reverse layup and the foul.

But as far as outright entry, Virginia continued to build a wall around the post. While the offense transitioned its stops into a smooth hooking floater from Diakite and a one-handed slam on the run.

With 13 minutes remaining, Jerome cut off a pass into the paint and ran to the opposing paint, hitting a crossover and swinging to Guy for a three above the arc. UVA led 12. A player outside of Thomas in the middle wouldn’t make a shot for Clemson until the nine-minute mark, when Devoe swung a pass out to Shelton Mitchell on the right wing for three.

Virginia, picking up a pair of turnovers on their own attempts at feeds into the low post, entered the bonus with over eight minutes remaining, breaking up Clemson possessions with fouls on the floor.

The Tiger would pull within five points, Thomas with two free throws and another bucket sitting around the rim. He scored 15 after a two-point first half, but Jack Salt ripped the game back toward Virginia dominance, cutting off two or three bodies on hard screens and following up his jump shot with a one-handed floater inside on the roll.

After fans chanted his name coming off the floor, Salt said “they were probably surprised I was scoring so much.”

Hall, rotating under the basket, set the play up by stripping Reed on the baseline and tossing the ball back in-bounds to a teammate as he fell out.

Salt shut it down again, after Reed and Hall traded threes he tipped in a miss around the rim to solidify the lead at seven. He flipped a cross-court pass out of the press, surely heading for Virginia’s bench, back in-bounds to Guy, and Virginia eventually worked the ball left to Jerome where he drilled a long two off a crossover with the shot clock ticking away.

“We’re here because of guys like (Salt) who are servants,” Bennett said. “Who screen, run the floor, rebound, and do whatever you ask. And he’s unbelievable … that’s the way he was raised. And that’s how it is probably in New Zealand, right, you just fight and you don’t back down.”

The Cavaliers led 61-53, never looking back and once again bending within several possessions in the second half but never surrendering the lead and once again, not losing. Ugly or not, they’ve only dropped one as they cruise into the ACC title game Saturday.