The Celtics made adjustments after Game 1, focusing on passing, shot selection and defense. They now have to go out and execute against the sturdy Bucks. 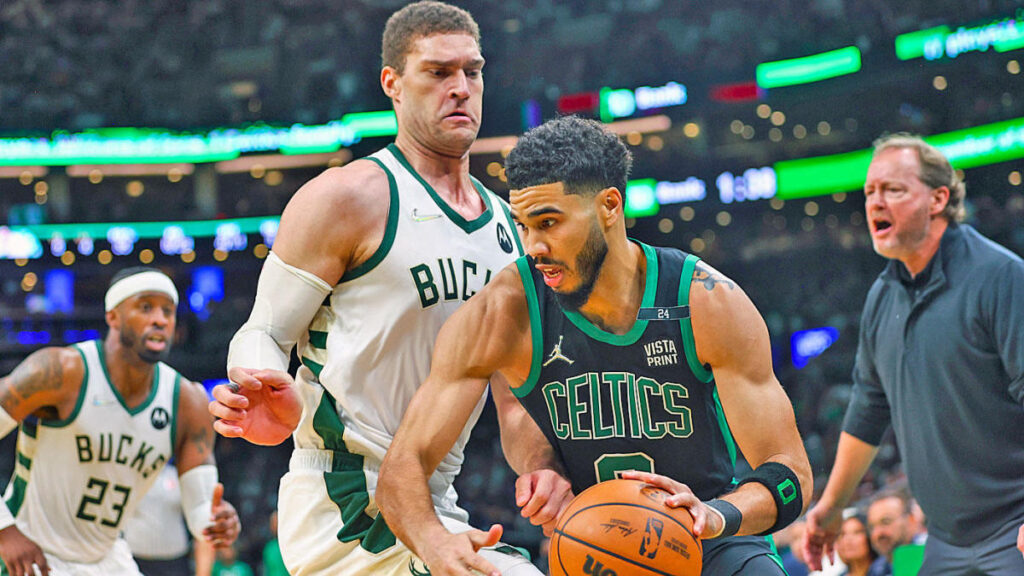 BOSTON — The Celtics might’ve had too much time to prepare for the Milwaukee Bucks last week, going to the extremes in how they attacked Giannis Antetokounmpo defensively and the Milwaukee drop scheme on the other end. Boston routinely double-teamed Antetokounmpo and allowed him to kick out passes for 12 assists finding his shooters. The Celtics launched 50 threes trying to take advantage of how Milwaukee packed the paint, converting 36%, but hitting a historically-low 10 two-pointers.

“It’s really our offense that really stuck out,” Grant Williams told CLNS Media at shootaround this morning. “Defensively, we felt pretty solid with what we did, they scored 101. Normally, that’s not enough to beat you, but our offense really cooked us and allowed them to get 28 points in transition … for us, it’s really just kind of working those kinks out and continuing to defend at a high level. We adjusted things.”

Williams attributed the Game 1 results, in part, to feeling out Milwaukee’s tendencies. Still, it amounted to the shakiest passing and ball-handling performance from the offense since the winter. The Celtics swung extra passes to open shooters early, and later forced shots up early in the shot clocks against pressure and a mounting deficit. By the beginning of the fourth quarter, Payton Pritchard and Jaylen Brown were launching jump shots off the dribble instead of getting into extended actions. When Jayson Tatum drove, Milwaukee’s entire defense collapsed. Throughout, Ime Udoka saw the Celtics miss reads, outlets, lob and drop-off opportunities, all while feeding the Bucks transition game.

Boston saw plenty of areas to adjust in a film-focused session on Monday. Here’s what to expect from the Celtics tonight.

Slowing down the offense

The biggest sentiment the Celtics left Game 1 with was feeling like Jrue Holiday, Wes Matthews and other Bucks perimeter players forced their offense to rush into sets. Boston sped up against Milwaukee’s smaller lineups, and had trouble slowing the game down, likely accounting for their missed reads.

“Against pressure, there’s three things you can do,” Williams said. “You can screen it, you can beat it, or you can basically kind of play with it. Like kind of get up the court and set up your offense. Oftentimes, when they’re not trapping you, not many people are picking you off one-v-one. So it’s just a matter of which one do you want to attack it with?”

“We have each that we can do, but honestly it’s just about beating the pressure, defending, making sure that they don’t speed us up, so being controlled if we do blow by. And also if we do screen, being able to set a good hard screen so they’re not as conscious and trying to pressure as much as they had been because of the fact that they just got nailed by a screen. Mixing it up is the best way to do it.”

Robert Williams III and Al Horford will play a large role in freeing up Brown and Derrick White, who took credit on Monday, telling CLNS he needed to be steadier as a ball-handler.

Matthews and Bobby Portis both attacked Tatum and White at different points with double-teams that forced turnovers near mid-court. Portis’ five-point burst in the second quarter derailed much of the offensive structure the Celtics had established earlier.

For Brown, his missed reads and seven turnovers in the lane took away numerous scoring opportunities in a game where the Celtics hung around down by 10 points at most through three quarters. Horford and Williams III received spot opportunities to handle the ball high and find cutters underneath.

Grant Williams and others occasionally took matters into their own hands to attack Brook Lopez head-on in the drop, leading to a three-block afternoon for the big man. Decision-making wavered and Udoka left the game feeling like Williams III in particular got underutilized.

“You want to mix it up and, at times, attack out of that when they’re pressuring. You can just blow by and get the numbers behind it, or set a screen and get the advantage there,” Udoka told CLNS. “But at the times when those guys get through it, we’re still playing two-on-one at times sometimes, or we’d kick it ahead and attack without any numbers on our side. So just understanding that we still have to be able to play with pressure and get us into our sets that we want … all guys tried to do it a little bit on their own, attacking their shot-blockers when we know this is a heavy rotation team and we have outlets all over the court.

“We took a look at those and saw all the opportunities we missed and I think we’ll be better for that coming into (Game 2). There’s different ways and different sets to get into it. A lot of times (Brown and White) are our primary guys, we’ll use them to initiate offense and we can simply go with our bigs to get into certain sets as well … for them, it’s understanding how we’re being guarded … being aggressive and getting off the ball when they draw that crowd, like they’ve done all year, and we’ll have the advantage behind it because of how they load up on those two.”

Udoka entered Game 1 emphasizing that the Celtics should take the three-point real estate that the Bucks concede, and early on the team produced quality looks for Horford and Marcus Smart. They swung defenders with up-fakes, pass fakes and dribble penetration, Smart setting up strings of passes to find open shooters like Horford and Williams.

Those looks continued to be there all game, but heaves early in the clock, contested jumpers and passing up opportunities for great shots creeped in as the Celtics went three-point crazy, reflecting their settling mentality from their loss to the Clippers earlier in the season when they went 9% from three.

Noticeably missing was Boston’s attempts to attack mismatches that they used to demolish Brooklyn’s defense. Tatum alone slipping into the high post often provides opportunities for him to shoot over smaller guards or find shooters on the perimeter. The Bucks found ways to stash Portis on Horford, which the Celtics tried and failed to exploit early on before abandoning that effort.

Matthews held up well on the perimeter, but Boston never got to test Grayson Allen and Pat Connaughton extensively in actions because of how erratically they entered the half court.

“There’s some really high level defenders, understanding their personnel and who they are defensively,” Udoka told CLNS before the series. “With Lopez, rim protection, and Antetokounmpo as well … they’ll give some penetration and kick opportunities with the drop-offs, but then understanding Holiday and Matthews and some of the guys that are elite on the perimeter as well. Pick our spots as far as that, looking at a few things to exploit, but they’re more traditional with the big in the drop. They bring Portis up a little to try to protect them, but we feel we have some advantages we can go at.”

“They switch some stuff off-ball with certain personnel and don’t with others,” he continued before Game 1. “We can attack it more normally than looking for matchups in isolation and mismatches. We feel we have favorable matchups as well with some of their guys … where Brooklyn’s bigs weren’t back as much, Drummond was up, Portis is very similar as far as that and Lopez is a little different. The sets that we put in this year and had success, we know what we can do with certain personnel for their team … we do feel our scorers have advantages as well in cross-matches.”

Smart’s health plays a big role entering Game 2, which he’s questionable for with a quad contusion. He shot 1-for-5 after halftime and struggled to impact the game on the ball, dealing with tightness that restricted his movement. Udoka and Williams both noted Smart’s intention to play through pain, but if he’s limited at all that pulls another playmaker at the point of attack out of the picture. As Brown noted entering the series, even if the Bucks sell out to eliminate paint shots and touches, they have to feel Boston’s presence there. Smart’s aggressive drives regularly initiated sets for the Celtics throughout the season.

Then, there’s Williams III, the sure-fired outlet for the Celtics to generate more paint looks at the basket. Boston didn’t look toward him nearly enough, and he only played 22 minutes. They had both lob and drop-off opportunities, his screening game freeing up his guards in the back court and giving himself a runway downhill from half court toward the rim for alley-oops. He looks comfortable rising above the rim, and Lopez needs to rise up to challenge Brown and Tatum’s pull-up jumpers. They struggled to give Williams III the amount of looks he needed.

“Maybe the lob threat and drop-offs that we did have, that we didn’t make, guys may not be used to that with him being out for those games,” Udoka said. “But understanding how Lopez and those bigs are protecting the paint, those passes were there all night … it was really us missing opportunities to find him at the rim.”

Antetokounmpo tortured the Celtics as a passer in Game 1, showing them how he’s ascended to a new level as a star who can find teammates without even looking. Antetokounmpo and Portis clearly established something of a telepathic connection, while Boston made it easy for him to find Allen and Connaughton by creeping too far into the lane. Smart regularly left assignments to cheat in on Antetokounmpo, with little upside gained by abandoning the shooters.

“I think we helped unnecessarily at times,” Udoka said post-game. “When we had some good matchups on him. When he shoots a fadeaway shot, we want to live with that shot and I think we rotated there and our rotation wasn’t sharp behind. Guarded him more one-on-one in the second half, but he impacted the game in the first half with a lot of the kick-out threes.”

As much as Antetokounmpo, who 9-for-25, has better scoring nights ahead of him in this series, Milwaukee will shoot better than 35.3% from deep. The Celtics need to pick their poison to some degree, but all year emphasized the need for individual defenders to hold their ground while Boston’s bigs pinch the lane and crowd paint touches with help defense.

His perimeter play became a different story, at times he sat in the paint while the Bucks screened free Connaughton by pulling Smart and Boston’s guards on-ball with screens. The Celtics tried to have him cover a variety of Milwaukee perimeter players, avoiding the Antetokounmpo matchup where they could on-ball when the Bucks went small. The results, however mixed, led to a sturdy defensive night for the Celtics.

The Bucks clearly had a better night in transition defensively. Lopez and Antetokounmpo founds the basket first then allowed the returning perimeter players to grab shooters. Even their full court defensive game plan starts with taking the rim away.

Boston scored 20 points in the paint, and got outscored 28-8 on the break. Turnovers sunk them, Tatum and Brown’s back-to-back giveaways at half court in the second quarter allowing wide-open threes in transition, before Horford tried and failed to back up Smart’s mistake here.