Advanced Stats Report: Bills Defense Takes Away the Middle of the Field From Tom Brady 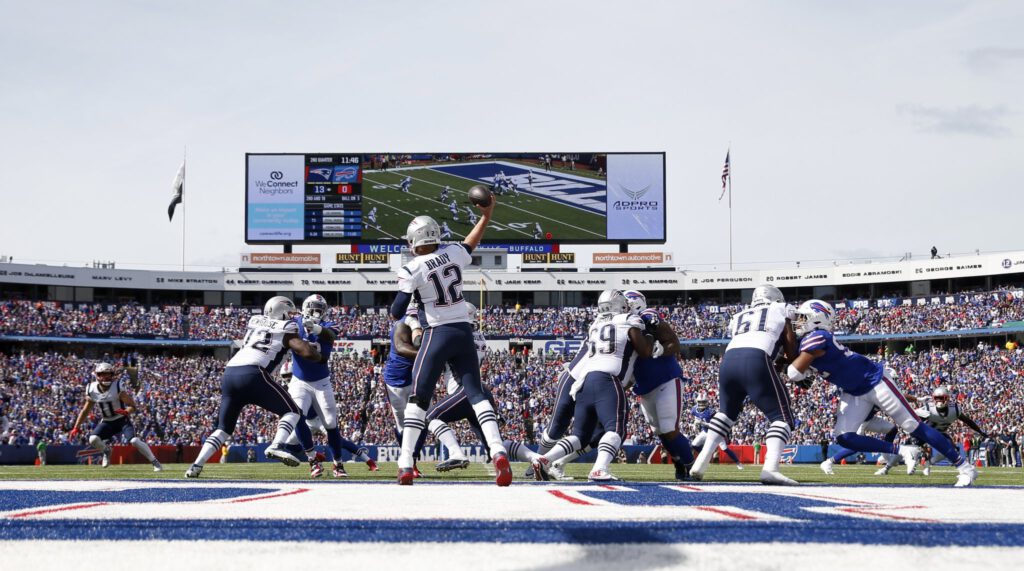 Below are a variety of advanced stats from the Patriots’ 16-10 victory over the Buffalo Bills.

As the chart above shows, the Bills defense took the middle of the field away from Tom Brady.

The six-time Super Bowl champ didn’t even attempt a single pass over ten yards between the numbers, and he wasn’t overly efficient in the short-middle either.

The Buffalo defense and coaching staff deserve credit for knowing Brady’s strengths and taking away the middle of the field, forcing him to beat them outside the numbers.

Along with the domination between the numbers, the Bills defense only allowed one completion of over ten air yards playing disciplined defense in the secondary.

Here’s an example from the broadcast angle of what the Bills defense did to take away the middle of the field from Brady. Buffalo is in a cover-2 structure with five defenders dropping into underneath zones at six yards across the field, and Brady eventually dumps the pass off to White in the flat for a short gain.

On Brady’s first interception of the season, the Pats quarterback made a common mistake with red-zone interceptions. As he leaves the pocket, he sees Edelman get a step on his man in the back of the end zone. However, Brady loses track of Micah Hyde who is defending Jakobi Meyers in the flat. Hyde peels off his man when he sees Brady start his windup, and intercepts the pass. I’m not sure why Brady came off the fade to Gordon. Gordon released cleanly at the line of scrimmage and had an easy touchdown, Brady just got a little impatient. This one is on the quarterback.

Although Brady had a bad day, he did make a few great throws that were the difference between him and the quarterbacks on the other side.

Here’s Brady’s best of the day: a beautiful tear-dropper to James White that set up New England’s lone offensive touchdown. The Patriots cleared out the entire right side of the field for White to run a wheel route against Bills linebacker Matt Milano in man coverage, and Brady dropped a dime.

In the time to throw department, Brady released the ball in 2.32 seconds on average, which is around his season average coming in of 2.3 seconds. Brady wasn’t holding onto the ball, that wasn’t an issue, the pressure and coverage of the Bills defense were, however.

In my film review this week, I’ll use the coaches film to show what the Bills defense did coverage wise to limit Brady and the Patriots offense. Stay tuned.

Brady was under duress on 30.8 percent of his pass attempts on Sunday, which is a noticeable increase from the last two weeks (16.7 percent), but less than Week 1 (43.2).

Although the pressure rate wasn’t a complete disaster, every offensive lineman for New England allowed at least one quarterback disruption. And Brady also had six intentional throwaways to avoid sacks or QB hits.

The man-on-man blocking was fine, but the bigger issue for the Patriots was blocking schemed pressure whether that was blitzes or defensive line stunts by the Bills.

Here, the Bills ran an interior twist with their defensive tackles. Right guard Shaq Mason walls off the initial penetration and then lets his man go to pick up the looping rusher on the stunt scheme. Mason and center Ted Karras fail to pass off the penetrator, and Brady has to throw the ball in the dirt.

The Patriots offensive line might not ever be a dominant unit like it was a year ago, at least until Isaiah Wynn returns. But their chemistry together to pass off pressure schemes should improve.

As you’d expect based on Brady’s passing chart, he had a difficult time completing passes to receivers running out of the slot.

Last week, Brady completed passes to six different receivers from a slot alignment, This week, it was only two, Julian Edelman and Josh Gordon.

Here’s another example of what the Bills defense did to limit the Patriots offense. Brady wants to throw a slant to Gordon working out of the slot. He tries to hold Bills linebacker Tremaine Edmunds with a quick play fake, but Edmunds slides underneath Gordon’s slant and nearly intercepts the pass. The Bills were driving on stuff over the middle all day.

On a positive note, the Patriots finally found an explosive play out of the slot with a mesh concept completion to Gordon for 31 yards. On the play, the offense creates traffic by crossing two receivers over the middle. Pats tight end Matt LaCosse inadvertently clips Bills corner Levi Wallace which frees up Gordon for the big gainer.

Edelman was mostly a decoy due to his chest injury, and without a viable tight end, the Patriots didn’t have any other options to work between the numbers.

The unsung heroes of the Patriots defensive front were John Simon and defensive tackle Lawrence Guy.

We all know about linebackers Kyle Van Noy and Jamie Collins, but Simon and Guy filled up the stat sheet with tremendous performances for the Patriots against the Bills.

In all, the Patriots pressured Bills quarterbacks Josh Allen and Matt Barkley on 38.5 percent of their drop-backs, and are averaging a terrific 43.3 pressure rate over the last three games.

Let’s start with Simon, whose containment on the edge was crucial in New England’s successful effort in keeping the mobile Allen in the pocket.

On Simon’s sack, both Simon and fellow edge defender Shilique Calhoun set firm edges forcing Allen to stay in the pocket and beat them as a passer. The Patriots ran an inverted cover-1 scheme with the safeties switching places at the snap which confused Allen, and he couldn’t pull the trigger. Eventually, Allen started to scramble, and Simon pounced along with Adam Butler to get him on the ground.

Against a mobile quarterback, the keys as pass rushers are containing on the edge along with a strong push from the interior defenders staying disciplined in their rush lanes.

With Simon and the other edge defenders containing, Guy went to work pushing the pocket on Allen leading to a team-high six quarterback hurries.

Here, Guy blows Mitch Morse back into the quarterback with a bull rush causing the Bills center to collide with Allen. With Guy’s ridiculous effort, Allen has to move off his spot, and he falls into Kyle Van Noy’s arms who finishes the play on the ground.

The Patriots then turned up the heat on Barkley when he got into the game pressuring him on eight of his 17 drop-backs in what was an excellent performance by the pass rush.

Against the run, the Patriots didn’t have the same success, which wasn’t a major surprise seeing that they played most of the games in lighter fronts.

The Patriots wanted more athletes on the field in the front seven to chase around Allen.

However, future Hall of Famer Frank Gore did run for over 100 yards averaging 6.4 yards per rush.

Most of Buffalo’s successful running plays were power concepts with pulling offensive linemen going from the backside to the play side. On the play above, the Bills ran a fullback counter scheme with the left guard pulling and the fullback leading through the hole. Pats linebacker Ja’Whaun Bentley’s job on this play is to scrape at the second level and play two gaps. He should hang back and wait for the running back to declare then jump into the gap. Bentley comes down into the double-team getting himself washed out of the play, and there’s nobody there to fill on the ball.

Gore’s longest run of the day, a 41-yarder, was a poor effort by JC Jackson trying to shoulder the very strong 36-year-old instead of wrapping up. But the refs missed a holding call on Guy at the point of attack. Either way that should’ve been an eight-yard gain, not a 41-yarder.

Overall, the Patriots got the job done in the front seven by preventing Allen from extending plays with his legs and burning them with his arm on the move.

The Patriots secondary was once again highly competitive in coverage contesting most of the completions by the Buffalo offense.

The CBS broadcast didn’t do the coverage justice with very few replays and awful zoomed-in angles of the interceptions, so for that, I’m sorry to those that watched at home.

On Devin McCourty’s interception, the savvy vet completely baited the young Allen into throwing the seam route. McCourty was playing a post-safety role in the middle of the field and drifted away from the seam ever so slightly. Allen thought he could beat McCourty with the throw, but the Pats safety jumped the route for the interception. He had it the whole way.

Along with McCourty, second-year cornerback JC Jackson had a terrific performance with a team-best 91.8 overall grade and a 93.5 coverage grade.

Jackson allowed only one catch into his coverage for three yards, had two interceptions and blocked a punt that led to a touchdown for Matthew Slater.

After a stellar rookie season, Jackson had an up and down first three weeks, but Sunday served as a reminder of how talented the 2018 undrafted rookie is in the Pats secondary.