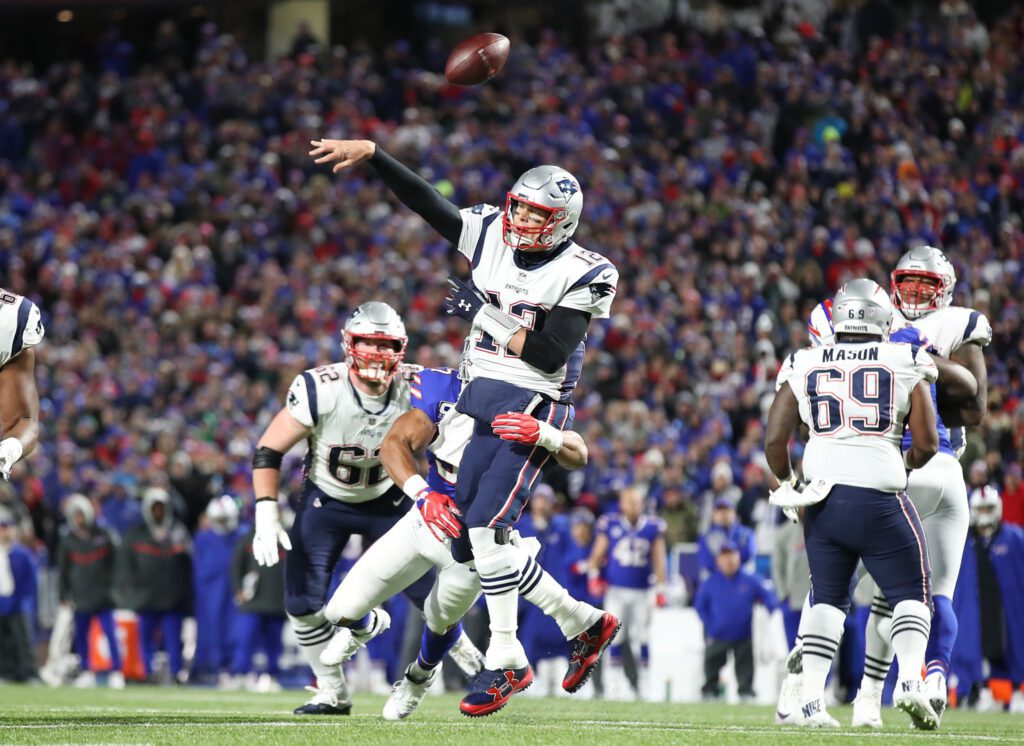 Below are a variety of advanced stats from the Patriots’ 25-6 victory over the Bills on Monday night.

For the second consecutive week, Patriots quarterback Tom Brady had the most success targeting the middle of the field against the Buffalo defense.

In all, 66 percent of Brady’s passing yards came between the numbers (214 of 324) and the three-time MVP only threw three incompletions on those throws.

Last week in Chicago, Brady threw for 83 percent of his passing yards in the middle of the field.

However, Brady’s best throw of the day came on a pass toward the left sideline to wide receiver Julian Edelman.

Although Brady’s directional charting is interesting, the story of the game for the Pats quarterback was his time to throw.

Against the Bills, Brady had an average time to throw of 2.7 seconds, by far his slowest release of the season.

As we saw on the Edelman play above, the Bills defense did a fantastic job of taking away Brady’s first read and forced the Pats quarterback to hold onto the football for longer than he wanted, or the New England coaching staff would’ve liked.

The coverage on the backend by the Buffalo defense was superb for most of the night as Brady’s receivers struggled to create separation, especially beyond 20 yards downfield where Brady completed only two passes.

Brady was able to find some openings attacking the Buffalo linebackers in coverage, but the Bills cornerbacks and safeties performed exceptionally well against the Patriots on Monday night.

Upon review, Brady wasn’t pressured as consistently as it felt watching the game live in Buffalo.

In all, Brady was pressured on a modest 29.2 percent of his dropbacks, but the combination of timely pressure and good coverage made things difficult on the Patriots offense.

Also, when Brady was under pressure, there were multiple breakdowns which gave the Pats offense very little chance to do anything on those plays.

On Bills pass rusher Lorenzo Alexander’s second sack of the game, both right guard Shaq Mason and right tackle LaAdrian Waddle lose blocks causing the sack. The Patriots run play action, and Mason pulls to sell the run fake. However, he fails to pick up his man and Brady eludes the first rusher, but he’s brought down by Alexander who pushes Waddle into the backfield with a strong bull rush off the edge.

There were numerous examples like this one where the play was lost from the jump due to immediate pressure on Brady, and as a result, Brady averaged only 2.7 yards per attempt on 14 dropbacks under pressure.

It was also a difficult day at the office for starting tackles LaAdrian Waddle and Trent Brown, who combined to allow two sacks, three quarterbacks hits, and nine total pressures.

The Bills pass rush is one of the best in the NFL, and they got the better of the Patriots’ offensive line on Monday night.

With Brady working the middle of the field, the slot was once again a productive alignment for the Patriots offense.

In Julian Edelman’s best game since his return from suspension, the Pats receiver caught six of his nine passes from inside the formation.

On this play, Edelman showed off what makes him such a terrific route runner by creating separation in his stem for Brady to find him over the middle. Bills cornerback Phillip Gaines tries to jam Edelman at the line of scrimmage, but Edelman matches the jam by getting on Gaines’ toes to eliminate any arm extension and then stays level on the cut across the field to create separation.

Although Edelman has made plays in previous games this season, he was at his best when the Patriots needed him to be on Monday night.

The Buffalo offense has struggled mightily this season, but the Patriots defense did its part to ensure that they didn’t give the Bills and quarterback Derek Anderson any easy yards.

For the second time in his career, Patriots linebacker Kyle Van Noy had a multi-sack game including a crucial strip-sack of Anderson in the third quarter.

On Van Noy’s strip sack, he shows solid get-off and timing to start his rush right at the snap and Bills left tackle Dion Dawkins is left grasping for air as Van Noy bends around the edge.

And his second sack was an inside linebacker blitz where Van Noy does an excellent job of going around the running back in blitz pickup on his way to the quarterback.

The Pats linebacker also added four run stops to his four total pressure and has put together his best stretch of play of his career over the last month or so.

In the run defense department, the Patriots had one of their best performances of the season holding the Bills to 2.4 yards per attempt on the ground.

Patriots defensive end Trey Flowers led the way with five run stops and lived in the Buffalo backfield for most of the night.

Flowers’ ability to win with burst and technique (pad level, arm extension, hand usage) was on display on his third-quarter tackle for loss where he blew up Bills tight end Logan Thomas to tackle McCoy behind the line of scrimmage.

The Patriots played with their best technique and gap discipline of the season against the Buffalo running game on Monday night.

The Patriots’ pass coverage forced Bills quarterback Derek Anderson to make throws against them consistently, and for the most part, Anderson wasn’t up to the task.

For the third-straight week, Patriots cornerback Stephon Gilmore spent most of the game on one receiver as he shadowed Bills wideout Kelvin Benjamin.

Anderson was two for seven targeting Benjamin with all of those targets coming against Gilmore, and Gilmore broke up two of those five incompletions and felt that Benjamin pushed off on his 40-yard reception in the third quarter.

Gilmore’ ability to stick with receivers on vertical releases and locate the football in the air was on full display against Benjamin on Monday night as he continues to establish himself as one of the game’s top cornerbacks.

Along with Gilmore, it was a strong performance for Patriots safety Patrick Chung in coverage.

Anderson targeted Chung a game-high ten times and only completed five of those passes for 34 yards.

Chung also did a nice job of defending a double pass on the Bills opening drive. The trick play didn’t fool Chung, and although Clay stacks him, he forced Anderson to drop the throw in the bucket.

The Patriots coverage didn’t give Anderson any free yards, and as a result, the Bills only scored six points.