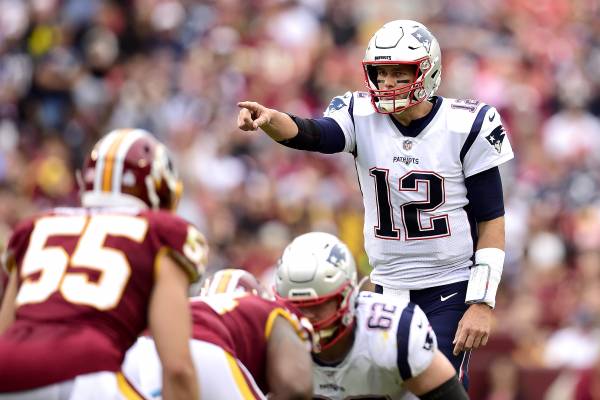 Below are a variety of advanced stats from the Patriots’ 33-7 win over the Redskins.

After struggling to last week, Brady completed ten passes of ten or more yards downfield, returning to his typical form.

With Julian Edelman and the tight ends more involved, four of those completions went into the middle of the field after the Buffalo defense took that area of the gridiron away from Brady.

The interesting part of Brady’s day, however, was how the Pats quarterback handled pressure and the game plan by the Washington defense.

First, the Redskins went with a variety of three-man rushes, dropping eight defenders into coverage. The strategy forced Brady to hold onto the football for a season-high 2.65 seconds on average in the pocket and led to pressure-induced by coverage, which was the case on Washington’s first sack.

Brady has Phillip Dorsett coming open at the bottom of the screen, but the initial coverage is good, and the play takes too long to develop. The Redskins run a stunt on the right side of the Pats OL, and Ryan Kerrigan comes free to put the pressure on Brady.

The difference between the first half and final two quarters was that Brady stepped up his game under pressure, throwing for two second-half touchdowns under duress.

On Brandon Bolden’s 29-yard touchdown catch, the Redskins sent a delayed blitz at Brady by the middle linebacker. Brady eludes the linebacker in the pocket and throws off his back foot to Bolden on the wheel route for a touchdown. The Pats cleared out the side for Bolden to work against the linebacker on a similar scheme to James White’s long catch against Buffalo last week.

As is usually the case, Brady’s stellar play under pressure can elevate the offensive line.

Brady was under pressure on 30.4 percent of his drop-backs, which isn’t terrible.

There certainly were some ugly plays, especially in the first half, but upon review, it wasn’t as bad as it appeared live on Sunday.

With that said, some issues continue to plague the offensive line, and we can’t overlook the mental aspect of the current state of things. If Brady doesn’t trust the line, it’s challenging to stand in the pocket. Plus, the pressured drop-backs are happening too quickly, giving the play no chance.

If you look up coach Dante Scarnecchia’s speeches on offensive line play, his golden rule is that all five players need to see the game through the same lens.

On Brady’s interception, there was a disconnect between left tackle Marshall Newhouse and the rest of the offensive line. Newhouse thought that everyone was down blocking with the Redskins bringing a zero blitz (six rushers). The result is that Newhouse and Thuney block the same defender leaving two unblocked rushers. You can see why Newhouse thought they were down-blocking at that the running back would take the edge defender. If everyone down blocks and the running back stays in to protect, the Patriots can pick up the blitz. Thuney would block the inside blitzer, Newhouse would block the guy he engages, and the back would take Kerrigan. Instead, it’s an interception.

Washington’s second sack of Brady was another miscommunication between Newhouse and left guard Joe Thuney. The Redskins rush three again, and Newhouse thinks he has inside help from Thuney. Thuney goes to help Karras leaving Newhouse one-on-one, and he gets beat by Jonathan Allen for the sack.

The Pats can live with a few losses in one-on-one situations, those happen throughout the season, but they need to get everyone on the same page.

In this week’s film review, we’ll go over the success of the running game.

In the slot, Julian Edelman put big-money cornerback Josh Norman in a blender for most of the game.

Here, Edelman motions into the slot before the snap. The motion gets him a free release, and then he goes to work on Norman. Norman has inside leverage, so Edelman attacks that leverage by running at Norman’s outside arm. That gets Norman to open his gate towards the sideline, and Edelman breaks inside to get into Norman’s blindspot. Once he’s in Norman’s blindspot, Edelman stays patient to sell an inside break and then cuts outside spinning Norman around.

Despite an injury to his ribs, Edelman was terrific, putting on a route running clinic on Sunday.

On the defensive side of the ball, the Patriots pressured Colt McCoy on 40 percent of his drop-backs and sacked the Redskins quarterback six times.

The linebackers led the way once again in the pass rush with Kyle Van Noy tallying a team-high five quarterback disruptions.

Van Noy’s speed and flexibility off the edge gives tackles problems, but so does his upper body strength. On the play above, Van Noy uses a long arm technique to push the right tackle into McCoy. McCoy steps up in the pocket, and Danny Shelton is there waiting for him.

Along with KVN, the Patriots also got a combined three sacks from Dont’a Hightower and Jamie Collins.

On Hightower’s first sack, the Pats linebacker told me after the game that the motion by wide receiver Trey Quinn tipped him off to the play call. He saw the same concept on tape, so he knew that he could leave his coverage assignment to chase down McCoy.

Collins finished off the linebacker sack party blowing by center Tony Bergstrom with insane first-step quickness and closing speed to lower the boom on McCoy.

Against the run, the 65-yard touchdown by Steven Sims on a reverse was ugly.

The Redskins use orbit motion and a fake handoff to sell the misdirection before McCoy hands the ball off to Sims. Then, the breakdowns begin. On any running play, the defense has to set the edge. The Pats fail to do that with Van Noy going for the tackle for loss by jumping inside and JC Jackson getting lost in the misdirection. No edge, no chance. From there, both McCourty twins whiff on tackle attempts with Devin going for a strip and Jason coming in too high. Chalk this one up to one bad play.

The good news is that the Patriots only gave up 3.9 yards per rush on running back carries.

Here, the Patriots do set the edge well with Van Noy and Lawrence Guy, forcing the ball carrier to string the run out toward the sideline. The edge set allows Hightower to run the play down from behind.

The Patriots continue to get great production from the linebacker position in all phases.

In the secondary, the Patriots held Colt McCoy to 4.4 yards per attempt and only 119 passing yards.

The play of the day in coverage for New England was, once again, by a linebacker.

Washington tries to run a misdirection screen pass with McCoy rolling to his right and the running back leaking out to the left. Pats linebacker Ja’Whaun Bentley was the only defender that has a chance at making a play before this goes for a big gain. Speaking to him after the game, he said it was just instincts that brought him back to the ball. He sniffs out the screen and blows Chris Thompson up in the backfield. Thompson might still be running if Bentley doesn’t make that play.

Along with Bentley’s hit stick, the Pats also created two turnovers and forced another fumble on the Collins sack referenced earlier.

One of those takeaways was a terrific “peanut punch” by slot cornerback Jonathan Jones. Jones drops into an underneath zone and gets his eyes turned back to the quarterback. Once McCoy throws the ball to Trey Quinn, Jones closes and punches the ball out of Quinn’s hands.

The Redskins passing attack with Colt McCoy at quarterback was extremely limited, but the Pats defense made sure they didn’t have any out of body experiences.