Advanced Stats Report: Breaking Down What Led to the Patriots’ Success on Defense 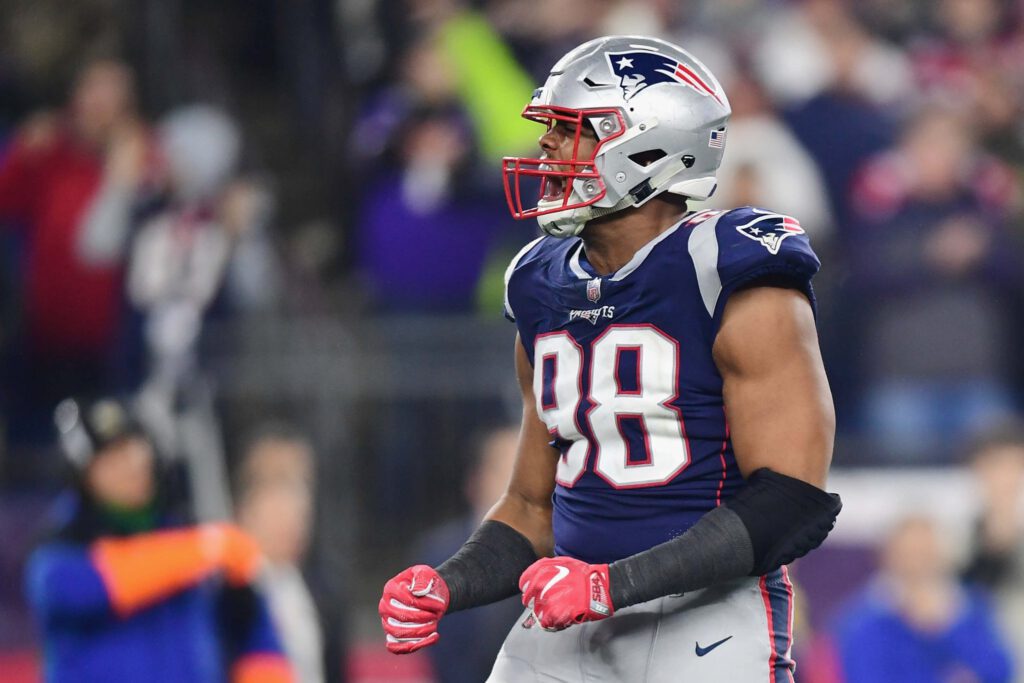 Below are a variety of advanced stats from the Patriots’ 24-10 win over the Minnesota Vikings in Week 13.

It should come as no surprise to anyone that Tom Brady’s passing chart this week features only five passes of ten or more yards in the air.

The Patriots, especially in the first half where Brady only attempted one pass beyond ten yards downfield, relied heavily on a game plan centered around short passes.

Brady threw a season-high seven passes behind the line of scrimmage, and 243 of his 311 passing yards came on throws that traveled under ten yards downfield.

Furthermore, Brady’s time to throw was a season-low 2.20 seconds, as the Pats quarterback didn’t wait around in the pocket for the Vikings’ pass rush to become a factor in the game.

From this perspective, the Minnesota pass rush, which entered Sunday’s action with the seventh-highest pressure percentage in the league, was the reason why the Patriots were so conservative on offense until late in the third quarter.

Although it took some time, Brady eventually completed his five downfield passes that were all crucial in the victory.

Let’s take a look at Brady’s touchdown pass to Josh Gordon that swung the momentum for the last time towards the Patriots.

On the play, the Vikings are in a cover-2 zone in the fringe red zone. Gordon does an excellent job of diagnosing the zone coverage and sitting down for Brady, but this is a perfect example of what makes Brady who he is as a quarterback. As you see from the end zone angle, Brady climbs the pocket to elude the edge rush, holds the safety by looking to his left, and comes back to Gordon, who wanted to go to all along, on an anticipatory throw over the middle. Thanks to Brady’s eyes (looking left before coming back to the middle), Gordon walks in for the touchdown.

Plays like these don’t look sexy, there’s no “big-time throw” element, but the pocket movement and ability to move the zone with his eyes is what makes Brady great.

In a game about the defense, Brady made all the throws he needed to against Minnesota.

Although Brady controlled the pass rush with short throws and a quick release, the Patriots’ offensive line deserves credit as well for keeping him clean.

In all, against a terrific pass rush, Brady was only under pressure on seven (21 percent) of his drop-backs, and the Vikings only managed one quarterback hit on the Pats quarterback.

Although that one hit was on him, Patriots left tackle Trent Brown had a stellar all-around performance against Minnesota mostly matched up against three-time Pro Bowler Everson Griffen.

Brown shut Griffen out, as the Vikings’ pass rusher didn’t register a single quarterback pressure on 29 pass rush snaps, 28 of which came lined up over Brown.

The interior of the Patriots’ offensive line also did a terrific job against Pro Bowlers Sheldon Richardson and Linval Joseph, neither of which registered a pressure either.

It took a team effort to slow down the Vikings’ defensive front, but the story of the game offensively was the offensive line’s ability to win that matchup both through the air and on the ground.

In the slot, it was a difficult day for Patriots wide receiver Julian Edelman.

Brady only completed two of his six pass attempts to Edelman when the Pats wideout ran out of the slot, and Edelman dropped an easy one on a third and six on the Patriots’ second drive of the game.

However, the Patriots did get some production out of the slot position thanks to creative play calling on the opening drive from Josh McDaniels to use misdirection and play-action against a Vikings defense that has struggled with both things this season.

On this play, a 24-yard completion to Cordarrelle Patterson, the Patriots ran play-action off of an outside zone scheme. Patterson does an excellent job of selling the run by chipping the end making it look like he’s executing a crack block before leaking out into the flat on the backside of the play. Patterson is uncovered, and he runs down the left sideline for a massive gain.

The Patriots didn’t get much production out of Edelman and tight end Rob Gronkowski, but Brady took what the defense gave him en route to over 300 passing yards against the Vikings defense.

On the defensive side of the ball, the Patriots got a complete effort from every level of the defense.

Two schemes contributed the most to the Patriots pressuring Kirk Cousins on 13 of his 46 drop-backs (28 percent), which is around the Pats’ season average but threw Cousins off his game in the first quarter.

First, the Patriots, as they have all season, utilized a pressure package predicated on defensive line stunts or twist games as Belichick often calls them.

Patriots defensive line coach Brendan Daly explained the keys to these plays on a conference call last week. Daly told me, “there’s an element of getting them called at the right time in the right situation, and then there’s also an element of the guys on the field understanding when and when not to execute those. I’d say that’s the first part. The next part is executing them well and correctly – getting vertical on them and the wrap players having the right amount of patience, not being too fast, not being too late as they come around. And then there’s also an element of making things right based on the protection or the blocking scheme of the offensive line.”

On this pressure from linebacker Kyle Van Noy, Van Noy executes the timing of the play perfectly. Van Noy takes a few steps into the line of scrimmage, which sells the game and allows for the inside penetration by Adam Butler and Dont’a Hightower, and then loops around his teammates to get a free run at Cousins forcing an incomplete pass on third down.

The Patriots lead the NFL in unblocked pressures this season, and their execution and timing on defensive line stunts is a significant reason why.

The other scheme that was ultra-successful for the Patriots in the win was the “radar” defense.

In this scheme, the defense puts a bunch of defenders at the line of scrimmage in a two-point stance, which allows them to disguise the rush and coverage before the snap.

Vikings quarterback Kirk Cousins likes to predetermine throws based on what the defense is doing pre-snap, so the Patriots confused Cousins by refusing to set their defense until after the snap.

In all, the Vikings offense converted only once out of ten tries on third down against the scheme.

Asked about it after the game Cousins said, “I think it was more bluffing Cover-0 and bringing Cover-0 and rotating between those. I think that they did that consistently throughout the game.”

Here, the Patriots have eight players threatening to rush in a cover-0 look, including both safeties. Devin McCourty rotates into a deep safety position right before the snap, and Patrick Chung drops to make this a two-high look immediately after the snap. By the time Cousins gets the ball, the Patriots are only rushing four defenders, but they still get a one-on-one matchup for Trey Flowers on Vikings center Pat Elflein. Flowers goes around the center and forces a throw in the dirt from Cousins.

The Patriots’ pass rush had a more productive day against the Jets last week, but the different designs they showed the Vikings offensive line, and quarterback Kirk Cousins got the Minnesota offense out of rhythm in the first half.

In the secondary, Patriots cornerbacks Stephon Gilmore and Jason McCourty were terrific as they shut down Minnesota’s vaunted receiver duo of Adam Thielen and Stefon Diggs.

Let’s start with McCourty, who did receive some help on Thielen, but was ultra-competitive in situations where he was matched up on Thielen in single coverage.

We’ll need the all-22 to break down the single coverage situations, but here’s an excellent example of zone coverage that worked out well for the Patriots against Thielen.

The Vikings are in a bunch set to Cousins’ right out of a reduced split (close to the offensive line). In that formation, and in general, the Vikings like to run Thielen on corner routes out of the slot. The Patriots sniff it out perfectly, and put JC Jackson over the top of Thielen and Jason underneath the route, giving Cousins no space to drop the throw into Thielen. This is a perfect example of the Patriots’ film study allowing them to anticipate a shot play to Thielen.

As for Diggs, Stephon Gilmore tracked the Vikings’ wideout without much help and held him well below his season average of 77 yards per game (49 yards).

On Trey Flowers’ sack, watch Gilmore at the bottom of the screen. He’s in press man coverage against Diggs, and he’s all over the Vikings’ wideout at the line of scrimmage beating him up out of his release. Cousins looks Diggs’ way at first, but Gilmore has him covered, and Flowers closes for the sack on third down.

Finally, it was also a terrific performance for Patriots rookie cornerback JC Jackson.

On Jackson’s pass break up, the rookie does an excellent job of staying in-phase on a double-move by Vikings wide receiver Aldrick Robinson. Due to his superb positioning, Jackson turns and locates the ball in the air, and knocks the pass to his teammate Duron Harmon for an interception in the end zone.

Jackson is taking to the coaching from the Patriots’ staff based on the way he played the ball in the air on Sunday afternoon.

And that attention to detail and fundamentals is the reason why he has earned more playing time.