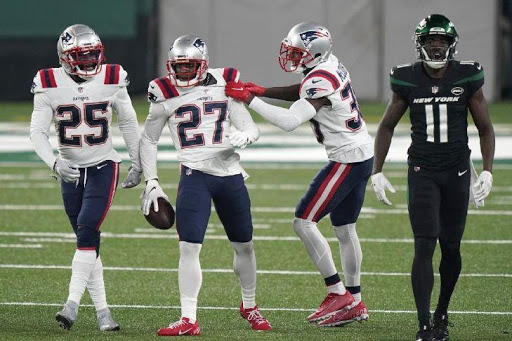 Below are a variety of advanced stats from the Patriots’ 30-27 win over the Jets in Week 9.

Patriots quarterback Cam Newton had his best performance since Week 2 on Monday night, posting his best QBR (90.1) and second-best Pro Football Focus grade (83.2) of the season.

Newton also posted his best completion percentage over expected (CPOE) of the season, completing 13.7 percent more of his passes than expected against New York.

All of those metrics are a fancy way of saying Newton played well, and head coach Bill Belichick was very complimentary of his quarterback.

Belichick noted Newton’s handling of the Jets’ blitzes, better timing with his throws, and strong eye manipulation to move the coverage away from his intended targets.

On Newton’s 20-yard completion to Jakobi Meyers that set up the game-winning field goal, Belichick pointed out that Newton moved the Jets’ zone coverage with his eyes by staring down the left side of the field. Once the coverage reacted to Newton’s cadence in the pocket, the Pats QB worked his way back to Meyers on the deep dig route with an excellent throw.

Earlier, Newton hit Meyers on a 33-yard shot play with fantastic eye manipulation once again. This time, Cam moves the deep safety in the middle of the field away from Meyers’s post-corner route to create a true one-on-one for Meyers on the right side of the field. With no safety help over the top, it’s an easy drop it in the bucket throw for the former MVP.

Here, the Jets bring eight defenders at Newton off play-action with only two receivers in the pattern. Newton has a quick answer to the pressure, going to a one-on-one matchup for Damiere Byrd’s stop route along the sideline, and Byrd turns it into a 31-yard gain.

Along with a quick trigger-finger against the blitz, Newton also danced out of pressure several times and kept the play alive in the pocket to hit throws downfield.

The Patriots would love to get that kind of consistency from Newton while creating plays on his own by extending in the pocket every week.

With the Jets sending heavy pressure at Newton, blitzing on 67 percent of his drop-backs, the Patriots only allowed a pressure rate of 30.6 on Monday night.

Leading the way was rookie right tackle Michael Onwenu who allowed zero quarterback pressures. Onwenu continues a stellar rookie season where he has only allowed one sack and five hurries in pass protection on 242 pass-blocking snaps, ranking 11th among guards and tackles.

Although he had a rough day in pass protection, right guard Shaq Mason was a maller in the run game, as he caves in the nose tackle on the play above to get Damien Harris downhill.

The Patriots offense will continue to improve if they can protect Newton while the quarterback also gets rid of the ball on time; those two things worked together nicely on Monday.

The Patriots wide receivers made mincemeat out of a lousy Jets secondary, with Jakobi Meyers delivering one of the best performances by a Pats wide receiver not named Edelman in years.

Meyers averaged over four yards of separation on his 14 targets with eight first-downs thanks to excellent route-running and coverage manipulation against all types of coverages.

#Patriots WR Jakobi Meyers running a post-corner route for 33 yards. Get inside leverage on an outside leveraged CB on release, vertical re-stem and stack, sell post with outside foot plant/fake, accelerate through the break. Good throw by Cam. pic.twitter.com/bDLUfORzmn

Here’s a Twitter thread I put together on some of Meyers’s highlights in the win. The Pats wideout continues to sell vertical releases, break away from leverage, and pay close attention to the nuances of route-running that’s very reminiscent of Julian Edelman’s style of play.

New England will ride the hot hand with Meyers, as in he won’t lose playing time once Edelman and N’Keal Harry return, and is a clear part of their future at the position.

If the Patriots can eventually get a true field-stretcher that can clear out space for Meyers at the intermediate level, he’ll eat even more between the numbers.

As the Pats offense begins to figure itself out, the defense is leaving a lot to be desired as they allowed Jets quarterback Joe Flacco to throw for three scores with 0.63 EPA per drop-back.

Although New England pressured Flacco on 42.3 percent of his drop-backs, they only converted one of those 11 pressures into a sack, meaning there was a lot of close but no cigar on Monday.

With that said, the pass rush did wake up in the fourth quarter with two critical plays on their lone sack by Deatrich Wise and a zero-blitz to force a quick three-and-out.

Wise led the Patriots with four pressures, and three run stops in a performance that started off rocky against rookie left tackle Mekhi Becton but recovered once Becton left the game.

On his sack, Wise used a great one-handed snatch move by getting into Becton’s backup, Chuma Edoga’s chest, with his inside hand. Once he gets control, Wise pulls Edoga towards him on the snatch move and goes around the Jets left tackle for the sack.

#Patriots film: cannot understate how heady of a play this was from Devin McCourty. Pats running a zero blitz. DMac is blitzing unless the RB releases out of the backfield. He stops his rush, peels off with the RB, and blankets Perine's wheel route. Play probably saved the game. pic.twitter.com/NHgsC5PFRe

Thanks to Devin McCourty on the following play, the coverage held up again as the Pats brought a zero blitz to pressure Flacco into an incomplete pass and get the ball back to Newton.

New England could use more plays that end in sacks when they apply pressure to opposing quarterbacks, but they’re doing enough with scheme and their individual rushers to get home.

The Patriots caught a break with their run defense after Becton left the game due to injury, as the Jets averaged 4.4 yards per rush in the first quarter with Becton (2.8 in the last three quarters).

Still, as the game wore on, the Pats did some good things in run defense, starting with newcomer Carl Davis at nose tackle and Chase Winovich returning to a more prominent role.

Here, the Jets ran outside zone, New England’s kryptonite, and Davis’s ability to hold up inside against a double team allows for Winovich and others to flow freely to the ball.

Although Davis cannot be expected to fix everything, the insertion of a legit nose tackle would do wonders for the Patriots’ front once Lawrence Guy returns to his typical strong-side role.

Belichick said that the Pats couldn’t take much from their limited time with Davis, who was signed off the Jaguars’ practice squad, but he’s probably their best option at nose tackle.

New England’s secondary had a rough outing on Monday night without Stephon Gilmore, allowing nine passes of over ten yards, including three touchdowns.

Over the last two games, JC Jackson was filling in for Gilmore as the Pats’ top cornerback, and although he has battled, the numbers aren’t friendly to New England’s number two corner.

On both of Perriman’s touchdowns, Jackson gets beat at the line of scrimmage and struggles to recover once out of phase to defend the deep ball. Jackson is the type of corner that needs to play sticky coverage at the line to smother a receiver’s release, but if they get upfield on him without much contact, he isn’t a burner that can stay glued to vertical threats.

Along with Jackson, it was an unlucky performance for Pats corner Jason McCourty, who is also bumping up a peg without Gilmore. McCourty got flagged for a ticky-tack pass interference call and then allowed a touchdown to Jamison Crowder that was an excellent catch by the Jets wideout. Still, the Pats seemed a little confused while defending bunches as to where their help was in the middle of the field.

New England’s secondary is still capable of playing good football, but it’s becoming more apparent by the week that Gilmore’s presence is needed if the Patriots want to make a run.