Advanced Stats Report: Everything Working Together for Patriots Defense 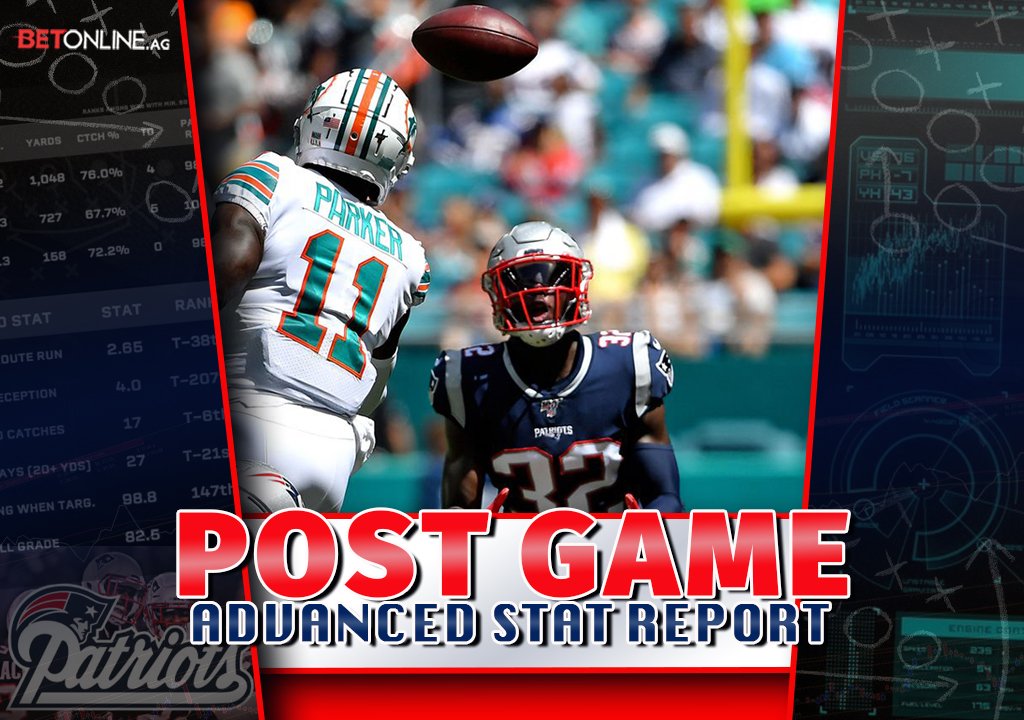 Below are a variety of advanced stats from the Patriots’ 43-0 shutout of the Miami Dolphins.

Patriots quarterback Tom Brady continued his hot start by completing 11-of-14 passes for 198 yards, a touchdown and a 142.6 passer rating on throws of ten-plus air yards.

Brady also completed two of his three attempts of 20 or more yards including a 20-yard touchdown to Antonio Brown. And he was six-for-six with a 91.5 PFF grade on throws to the middle at the intermediate level. Here are some of Brady’s best throws on Sunday:

On Brady’s longest completion of the afternoon, the Patriots ran a variation of the smash fade concept to the field, the same play they used on Antonio Brown’s touchdown. Burkhead runs a fade route from the slot while Josh Gordon runs a five-yard in cut on the boundary. Burkhead gets half a step on Dolphins linebacker Jerome Baker, and Brady drops a tear-drop dime on the outside shoulder to his running back.

Brady also converted a third and 17 on a frozen rope to Phillip Dorsett who made a great grab.

On the play, the Patriots are in 20-personnel with two running backs flanking Brady. With 17 yards to go, the Pats know that they need time for the routes to develop, so they help out their backup tackles by chipping the defensive ends. The Dolphins only rush three giving Brady space to step into the throw, and he let’s go a bullet on a deep out route to Dorsett for the first down. Noodle. Arm.

In the time to throw department, Brady got rid of the ball in a brisk 2.30 seconds on average. After two weeks, Brady’s average time to throw ranks sixth among all starters (2.34 seconds).

As long as the offensive line holds up, Brady will continue to pick apart opposing defenses; his 138.9 passer rating from clean pockets ranks fourth among all starters.

Believe it or not, Brady was only under pressure on five of his 30 drop-backs on Sunday.

After facing pressure on 43.2 percent of his drop-backs in Week 1, the Dolphins defense struggled to get to Brady pressuring him on just 16.7 percent of his snaps.

As the Dorsett completion above shows, the Patriots helped out fill-in tackles Marshall Newhouse and Korey Cunningham by chipping with the backs and tight ends.

And although the results were good, both Newhouse (49.8 out of 100) and Cunningham (63.2 out of 100) graded out poorly in pass protection according to Pro Football Focus.

In the running game, the Patriots still aren’t at the same level they were a year ago, but there were some bright spots in the win against Miami.

Here, the Patriots ran an isolation play with fullback James Develin in the backfield, one of their staple run-blocking schemes. The goal of the play is to get right tackle Korey Cunningham and right guard Shaq Mason to kick out the defenders giving Develin a clean shot at the linebacker in the hole. The blockers do their jobs, and Michel sets up the blocks nicely. Michel runs at Mason’s inside leg waiting for Develin to make his block and then cuts off to the right as late as possible so that the defense can’t flow to the alley.

Yes, the makeshift offensive line got the job done against the Dolphins, but a better defensive line will likely expose the issues with technique and functional athleticism in the future.

In the slot, the Patriots once again targeted their wide receivers and running backs heavily with nine of Brady’s 28 attempts going to receivers working out of the slot.

Among those receivers was the newest Patriot, Antonio Brown, who ran eight of his 14 routes out of the slot hauling in two catches for 38 yards and a touchdown.

The Pats unveiled three and four wide receiver sets that are going to haunt opposing defenses all season if Brown stays on the field.

Here, Brown is working out of the slot against zone coverage. Miami runs a simulated pressure. The two edge rushers on the line of scrimmage drop into coverage and the two off the line linebackers blitz. The sim pressure leaves a void in the middle of the field. Brown runs into that void on an over route or crosser, sits down and Brady hits him for an 18-yard completion.

On Brown’s touchdown catch, the Patriots ran a similar smash fade concept as Burkhead’s catch above. Brown’s explosiveness off the line gets Dolphins corner Jomal Wiltz to speed turn into a sprint. With Wiltz even with him at the top of the route, Brown sets up on Wiltz’s outside hip and looks for the back shoulder. Brady puts the ball in a perfect spot and Brown has his first TD as a Patriot.

The days of tight end targets out of the slot might be over for the time being without Rob Gronkowski, but the receivers are making up for the lost production.

After a slow start in Week 1, the Patriots’ pass rush got after Dolphins quarterbacks Ryan Fitzpatrick and Josh Rosen.

Adam Butler and Danny Shelton led the way on the interior with four pressures apiece with ten other Patriots joining in on the party in the Miami backfield.

Among those 12 Patriots that got to the quarterback were edge defender Chase Winovich and linebacker Jamie Collins.

On this third-quarter sack of Fitzpatrick, the two met in the backfield on third and 15. The Patriots were in their “50” front with four standup rushers and Michael Bennett as the lone defender with his hand in the ground. They then ran a long stunt on the left side of the line with a traditional T/E stunt on the right. On the left, Dont’ a Hightower wraps around the penetration from Jamie Collins and Michael Bennett. While on the right, Winovich works around Adam Butler’s inside rush. The center and right guard try to pass of Collins so that the center can block Hightower, but the Pats linebacker slithers through the line. Winovich gets a free run at the QB thanks to a good pick from Butler, and the two meet at the QB.

Against the run, the Patriots also continue to get contributions in the running game from the secondary. In the first two weeks, the Pats secondary has combined eight run stops.

On this third and seven run, the Patriots are in their “40” front with Michael Bennett as the lone defender with his hand in the ground. The Dolphins ran a split-zone blocking scheme with the offensive line stepping right and the tight end performing a “sift” block on the backside edge defender. Bennett’s responsibility is to set the edge leaving Jason McCourty to fit the play side “B” gap. McCourty steps into the hole and makes the tackle on Kenyan Drake.

The Patriots defense has only missed four tackles through two weeks. Last season, they missed eight tackles in their loss to the Jacksonville Jaguars alone.

The Patriots played spectacular team defense on the backend forcing Miami to string together high-level plays that they weren’t capable of making.

Fitzpatrick and Rosen only completed five passes beyond ten yards on 39 attempts, and two of those came late in the fourth quarter when Rosen entered the game.

Devin McCourty’s third-quarter interception was a great example of multiple efforts contributing to a turnover. The Patriots are in a cover-1 man structure with Duron Harmon dropping off the line into a robber position over the middle. First, Kyle Van Noy uses a speed-to-power rush with a heavy punch to knock the right tackle back and take the inside path to Fitzpatrick. Fitzpatrick tries to hit DeVante Parker on a crossing pattern, but Stephon Gilmore undercuts the route and makes a terrific leaping deflection that falls into the hands of McCourty. Rush, coverage and finish the play.

When the Dolphins did complete a pass, which was rare, the Patriots limited yards after the catch.

On this play, the Dolphins set up a screen to speedster Jakeem Grant. The Dolphins ran two receivers deep to clear out the flat for Grant presenting a one-on-one matchup with Jon Jones. Jones breaks down and makes a terrific shoestring tackle on Grant who had some space to make a play.

The Patriots defense has an unbelievable level of trust in both each other and the system, which is why we haven’t seen any big coverage busts in the first two weeks.