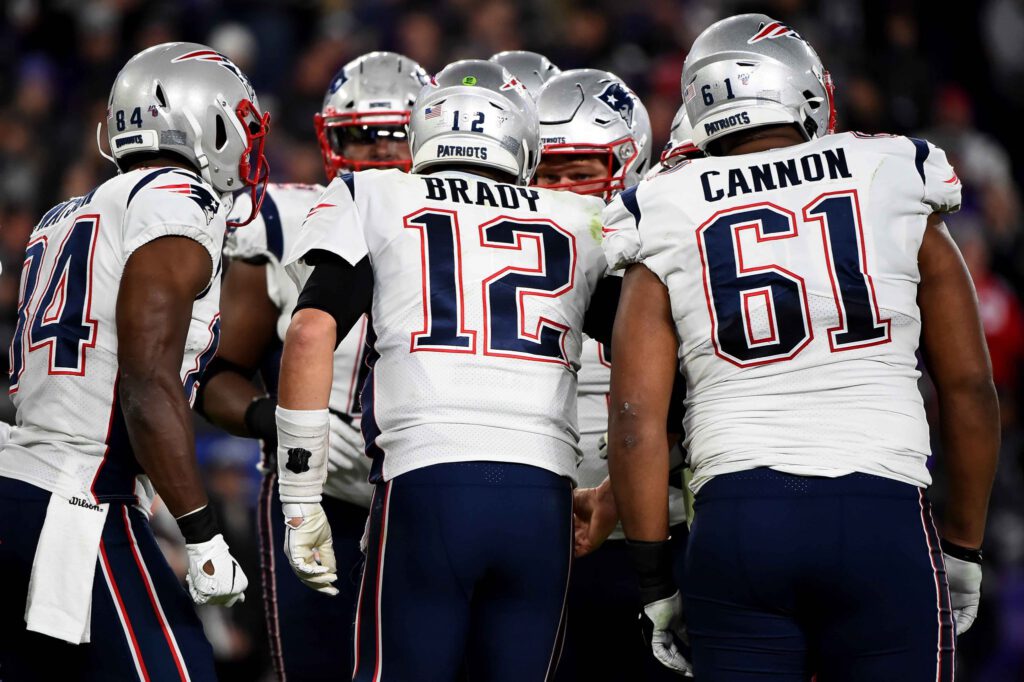 The bye week comes at a good time for the Patriots nine games into the season, giving the players some much-needed rest and the coaching staff a large sample of film to sift through.

Despite their loss to the Ravens before the bye, the Pats still sit atop the AFC as the lone team with one loss and a league-best plus-172 point differential.

With a nine-game sample, there are statistical trends that are forming in all three phases, which includes the overarching theme of the season on defense thus far.

At this point, the Patriots’ switch back to a 3-4 base defense is well-documented after spending the last few seasons in an even front with their 4-2-5 nickel package as their base on 35 percent of plays in 2018.

In the first nine weeks of 2019, the Patriots spent 56 percent of their snaps defensively in an odd front with three defensive linemen on the field, and their 3-3-5 nickel package accounts for 33 percent of their total plays.

We’ve only seen the 4-2-5 nickel package on four percent of New England’s defensive snaps, and they’ve only been in a four defensive linemen front on seven percent of plays overall.

Although the defense has dominated in eight of nine games, head coach Bill Belichick always preaches versatility, and the Ravens exposed New England’s odd front in the running game.

The Patriots are thin at defensive end after the trade of Michael Bennett to Dallas, giving them only a few options as 4-3 defensive ends if they have to go in that direction in the future.

Deatrich Wise gives them one 4-3 end, but their other options include ideal standup edge rushers in rookie Chase Winovich and veteran John Simon or the unproven Shilique Calhoun.

If opposing offenses continue to run schemes designed to exploit a two-gapping odd front, can the Patriots defense switch up its style to play a one-gapping even package?

The Patriots somewhat stuck as a two-gapping defense due to their personnel, which they can still dominate in as they’ve shown in the first half of the season.

But if you’re looking for a weakness to attack this defense, it’s in the 13th-ranked run defense by Football Outsiders’ DVOA metric and the lack of depth along the defensive line.

Here are some other trends from the first half of the season for the Patriots:

We’ll get to some positives shortly, but Tom Brady’s statistical regression on passes while under pressure is worth mentioning off the top.

Through the first nine games, Brady’s Pro Football Focus grade, which is based on the tape, drops from a stellar 93.4 out of 100 when kept clean to 44.7 under pressure (22nd out of 33 qualified quarterbacks).

Brady’s 33.7 completion percentage is the worst in the NFL among quarterbacks that have played in over 50 percent of their team’s snaps, and his 47.9 passer rating is fourth-worst among 33 qualified quarterbacks.

The Pats QB is at the bottom of the league with the likes of Baker Mayfield, Mitchell Trubisky, Sam Darnold, Jameis Winston, and Joe Flacco in passer rating while under pressure.

There’s a lot to unpack here to explain this insane regression; Brady’s passer rating while under pressure would be his worst since PFF began logging stats back in 2006.

First, Brady seems to be protecting himself and the ball on plays more than usual when there’s pressure in his face, leading the league in throwaways while under pressure with 22.

Then, there’s the offensive line, which is currently seventh-best in PFF’s pass-blocking efficiency metric, which measures pressured allowed on a per snap basis.

If that seems high, get this, Brady is only under pressure on 29.7 percent of his drop-backs, which is the fifth-best mark in the NFL among those 33 qualified quarterbacks noted earlier.

Scheme and Brady’s quick release are significant reasons for those surprisingly good numbers, but when we dig deeper, we find some more truths to Brady’s regression while under pressure.

This season, the pressure is arriving on those drop-backs in 2.41 seconds on average. Last season, when Brady was much better under duress, his average time to pressure was 2.53 seconds, which could explain why Brady is giving up on plays more than usual and throwing the ball away.

One-tenth of a second doesn’t sound like much, but throughout nine games, and when you take into account that it’s an average, it’s safe to say that it’s making an impact.

Last season, it was 67.0, which was the eighth-highest mark in the NFL.

Brady is performing worse while under pressure, but his offensive line gives up those disruptions at a faster clip, and his receivers are creating less separation. A perfect storm, if you will.

As promised, here’s a positive trend that shows that Brady is still one of the best quarterbacks in the league.

Brady is one of the top passers on throws to receivers that aren’t his first read on the play, and that comes without the scramble element that someone like a Russell Wilson possesses.

The six-time Super Bowl champ is still the best quarterback in the league at scanning through his reads in the pocket, and watching him every week, it’s easy to pick out those plays.

Here’s an example from New England’s road win over the Washington Redskins in Week 5. The Redskins are in a zone match coverage. Brady’s first read in his progression is to his left, where the Patriots have HOSS called, half of their infamous HOSS Z Juke concept. The outside corner drives the hitch route on the boundary while the slot defender stays over the top of the seam by the inside receiver, taking away Brady’s first read. He then quickly looks over the middle where the defense has the tight end bracketed and ends up completing a pass to Julian Edelman on the opposite side of the field. When people talk about a quarterback reading the full field or going through his progressions, that’s what they mean.

When Brady is kept clean and can go through his reads, he’s as dangerous as ever.

In the loss to the Ravens, the Patriots, who typically cycle through personnel groupings like hockey lines, played every single snap out of their 11-personnel package (3 WR, 1 TE, 1 RB).

This season, the Pats are in 11-personnel on 52 percent of their offensive plays, which is in the middle of the pack despite the game plan against Baltimore.

Where the Patriots continue to be a bit of an outlier is with packages that don’t feature a tight end, although Kliff Kingsbury and the Arizona Cardinals are the real outliers in that respect.

The Cardinals lead the way with 245 snaps without a tight end, but in second place are the Patriots with 90, which is nearly double the next closest team (Seahawks – 47).

In theory, without a legitimate receiving threat at tight end, personnel groupings that feature wide receivers and running backs sound like an excellent idea for these Patriots.

However, albeit in a smallish sample size of only 81 drop-backs, the numbers suggest that the passing attack is far more effective when the Patriots do have a tight end on the field.

As the chart above shows, there’s a considerable decline in Brady’s passing yards per attempt and expected points added when the Patriots take the tight ends off the field.

New England, although only slightly, is losing points without a tight end in the lineup.

With that said, don’t expect the Patriots to abandon the non-tight end package completely.

Without Rob Gronkowski, the Patriots are still figuring out their offensive identity and likely working out some kinks with their schemes and execution in four receivers sets.

With N’Keal Harry’s debut looming, my guess is the Patriots will continue to experiment with 10-personnel and see if they can get that dynamic grouping humming before the playoffs.

The Patriots also unleashed a no-huddle attack against the Ravens on 52 percent of their plays on offense.

The question now is, should the Patriots continue to hit the gas offensively after it seemed to spark the offense a bit against Baltimore?

Well, the numbers on the season, while again considering the sample size, suggest that Brady’s stats do improve across the board when the Patriots pick up the pace on offense.

The idea of tempo being the solution to all the issues on offense is a bit strong for me, but a lack of explosiveness on the outside could be masked slightly by running more no-huddle.

Moving forward, the best course of action for the Patriots based on their current personnel and the data we have available would be to spread the field and go fast; pace and space.

Although it won’t be with multiple tight ends, things could look more like the 2011 offense in terms of style than what we saw a year ago with the heavy groupings late in the season.

Speaking of the running game, there’s been a lot of talk about this group not passing the eye test when it comes to run blocking, and the stats back that up, at least relative to last season.

The Patriots currently rank tenth in Pro Football Focus’s run-blocking grade with a 62.3, which is slightly below their seventh-ranked unit a year ago during the regular season (67.5).

However, if you include the postseason, the Pats run-blocking grade improves to 72.1 out of 100 a year ago, which shows a more significant regression than the regular season numbers.

Four weeks ago, the Patriots were 19th in the metric, which suggests that they are improving.

Although Pro Football Focus paints a friendlier picture, Football Outsiders’ adjusted line yards metric, which measures the effectiveness of the offensive line isolated from the play of the running backs, isn’t as forgiving.

According to adjusted line yards, the Patriots are currently 14th in the NFL at 4.3, which is a noticeable dropoff from the third-ranked unit in 2018 (5.03).

Both metrics back up the eye test in that the offensive line isn’t creating as much for the running backs as a year ago in New England.

One last note on the defense, the Patriots, as is usually the case, are among the league leaders in man coverage frequency this season, trailing only a former Belichick assistant.

The Pats defense is running man coverage on 56.8 percent of passing plays, and that number climbs to 62.5 percent when you take out screens, prevent defense, and combo coverages.

Along with a high-volume of man coverage, the Patriots are also among the league leaders in zero blitzes, which were extremely effective in the first nine weeks of the season.

Only the Baltimore Ravens (9.1 percent) and the Kansas City Chiefs (6.5 percent) bring more zero blitzes on a per snap basis than the Patriots in 2019.