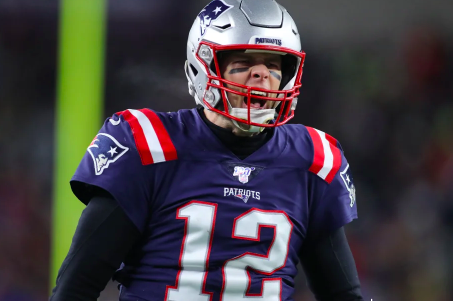 Below are a variety of advanced stats from New England’s 23-16 loss to the Kansas City Chiefs.

According to the Athletic’s Ben Baldwin, Brady’s combined completion percentage over expected and expected points added per play ranks 25th in the NFL.

Those efficiency metrics come with several possible explanations that have nothing to do with Brady, but they’re a painful reminder of the state of the Patriots offense.

From a clean pocket, Brady is still grading out on tape as one of the best quarterbacks in the NFL, ranking sixth with an elite 90.1 Pro Football Focus grade.

Some weeks the six-time champ will remind us of his fantastic accuracy on intermediate throws or pocket movement, but this week it was a deep throw with some touch that caught my eye.

The Patriots offensive line keeps Brady clean against a four-man rush. On a critical third down, the Chiefs appear to be doubling Julian Edelman at the sticks with the deep safety, and might even be bracketing Brandon Bolden’s wheel route (hard to tell on TV copy). With no deep defender, Brady tries for a big play to rookie wide receiver Jakobi Meyers, lofting a perfectly placed pass downfield. Meyers couldn’t complete the catch because Chiefs corner Kendall Fuller interfered with him, leading to a 24-yard penalty.

Where we’ve seen Brady have some issues is when he’s under pressure, and to mostly no fault of his own, he was under duress on 40 percent of his dropbacks on Sunday.

His grade drops to a pedestrian 16th among all eligible quarterbacks (49.1 out of 100) while under pressure this season.

Brady missed a couple of open throws to the sideline when he was unable to get his hips and feet fully pointed to his target because of pressure.

Belichick elected to go for it on fourth and seven from Kansas City’s 27-yard line instead of attempting a field goal. The Chiefs send the slot cornerback standing over Julian Edelman and the off-ball linebacker to form a six-man blitz against five blockers. Brady reacts to the unblocked defender in time to get to an open Julian Edelman at the sticks, likely his “hot” read, but he sails the throw wide.

Brady had a similar miss against the Texans on a second-down throw to Rex Burkhead last week.

Brady also had to throw the ball away another three times, bringing his league-high total to 39, eight ahead of the next closest quarterback in Green Bay’s Aaron Rodgers.

In a recent press conference, the Pats quarterback said he’d rather throw the ball away than take a sack.

In time to throw, Brady’s release remains a tick higher than usual, but at 2.64 seconds on average, he got rid of the ball much faster than in Houston (season-high 3.21 seconds).

Brady is not entirely blameless for the struggles of the offense, but he remains the least of my concerns, and he’d be better across the board with more to work around him.

The Patriots o-line has had better days allowing pressure on 40 percent of Brady’s drop-backs, as noted earlier, which was their third-worst rate of the season behind Weeks 1 and 8.

Let’s start with a positive, though, and that’s the performance of left guard Joe Thuney, who had a clean sheet in pass protection to go along with an 88.9 pass-blocking grade.

Starting right tackle Marcus Cannon allowed a red-zone sack, and the man next to him, Shaq Mason, surrendered three hurries, but they were competitive along with Thuney throughout.

That isn’t to say that Isaiah Wynn was a weak link, but he had a tough matchup with Chiefs edge defender Frank Clark that Clark won based on the TV copy.

And third-string center James Ferentz did his best but was a weak link with a 22.4 pass-blocking grade.

The pressure the Patriots allowed also came at inopportune times on third down. Brady was under duress all night on third down with the offense going two-for-12 and the pressure rate climbing to 69.2 percent.

The Chiefs also hurried the quarterback with 14 blitzes they sent Brady’s way on Sunday, some of which involved six or more defenders giving the rush a numbers advantage.

We’ll see how many open receivers are on the coaches film, but Brady didn’t have a ton of time out there.

Out of the slot, Edelman was targeted ten times hauling in seven of those passes for 58 yards.

Other than that, nothing was doing from inside the formation for the Patriots.

Edelman’s gaudy target-total from inside is pretty standard. He’s now tied with Los Angeles’s Cooper Kupp for the most slot targets (86) and receptions (59).

But on Sunday, we saw Brady target him at a high rate to bail him out when Kansas City blitzed. Brady connected with Edelman multiple times as his primary “hot” read against the blitz. The Chiefs sent multiple slot blitzes, and Brady threw right at the blitz to an open Edelman several times.

Outside of Edelman and running back James White, there isn’t much chemistry or production out of Brady’s other receivers.

The Patriots defense pressured Chiefs quarterback Patrick Mahomes on 31.1 percent of his drop-backs, which is around average in a game.

In the first half, they struggled at times to generate a pass rush, but they got things going in the last two quarters.

Leading the way was Pats outside linebacker Kyle Van Noy, who caught Mahomes drifting in the pocket here on a critical third-down forcing a throwaway and drawing a face mask penalty.

Other contributors include Nose tackle Danny Shelton and defensive end Deatrich Wise, with Wise showing off good relentlessness and closing speed on his sack.

The Patriots only blitzed Mahomes fives times, opting to play coverage most of the time. There wasn’t a ton of heat on Mahomes.

Against the run, Van Noy graded out as the defenses top run defender setting the edge (88.2) and led the team with four run stops as well.

However, a trick formation on a read-option keeper by tight end Travis Kelce led to a critical touchdown for Kansas City. Kelce took the direct snap with quarterback Patrick Mahomes behind him, and Kelce has the option to handoff to speedster Tyreek Hill or keep it himself. The second level defenders take the cheese on Hill, and the Pats front gets pinned down parting the seas for Kelce up the gut.

New England’s defense shut down the Kansas City rushing attack other than that, holding them to a 2.6 average, but that play stood out to all of the players after the game.

The Patriots had an up and down first half in coverage, some of that was scheme, and some of it was breakdowns by the players.

But one of their best coverage plays of the season came early in the game, and they held Mahomes to 3.8 yards per pass attempt in the second half.

In the first half, New England played 12 snaps in a Tampa-2 defensive structure. The zone defense left them vulnerable to short throws over the middle, and the Chiefs feasted.

In Tampa-2, the middle defender at the second level runs with all vertical routes through the heart of the defense because the two deep safeties are widening to the sidelines. Andy Reid knows this, so he runs tight end Travis Kelce through the coverage, Pats safety Patrick Chung follows, and there’s nobody there to cover Sammy Watkins underneath Kelce’s route.

The Patriots gave us a glimpse of the type of coverage they’d play in the second half. It wasn’t all “one cross” schemes, but they played cover-1 on ten of Mahomes’s 15 attempts.

On the third play of the game for Kansas City, the Patriots are in “one cross” with Devin McCourty looking to pick up any crossers from the three-receiver side. Hill runs an over route, and McCourty jumps it, letting Jonathan Jones rally back to the crosser going in the opposite direction. With Jones over the top, JC Jackson undercuts Demarcus Robinson for the interception.

The Patriots played “one cross” again here to stop the Chiefs on third and ten late in the game.

The dangerous Chiefs passing attack won some battles in the first half, but the Patriots secondary locked things down in the final two quarters.