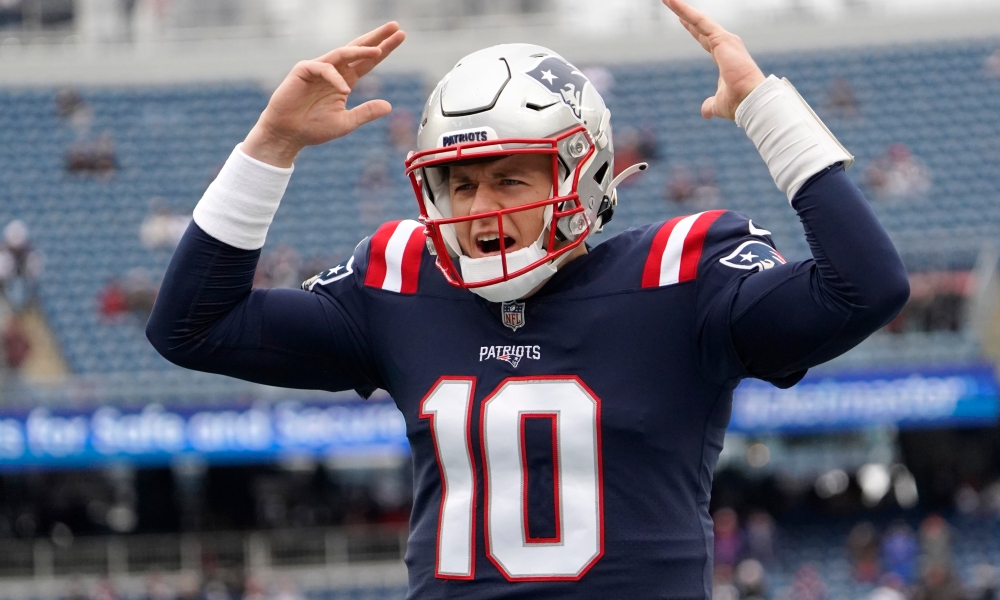 The Patriots are rolling with their sixth-straight victory in Sunday’s 36-13 victory over the Titans.

Although it was far from a perfect performance on either side of the ball, Pats quarterback Mac Jones was highly efficient in the passing game and protected well again by his offensive line. 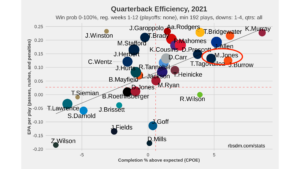 Jones is creeping into the top ten among all quarterbacks in expected points added (13th) and is holding his spot among the league’s best in completion percentage over expected (sixth).

During New England’s six-game winning streak, Mac has the highest EPA per drop-back in the NFL and is third in CPOE, while his offensive line also deserves credit for keeping him clean.

Since Week 7, the Patriots are allowing the third-lowest pressure rate (22.9%) and rank first as an offensive line in pass-blocking efficiency, according to Pro Football Focus.

Below are a variety of advanced stats from the Patriots 36-13 win over the Titans in Week 12:

The production-based metrics were off the charts for Jones in his second career 300-yard passing performance in the victory over Tennessee.

Mac lucky on some of his biggest throws (Byard overrunning PBU opportunity, Bourne winning at the catch point on a TD when that is normally broken up, Bourne YAC-driven TD, and the dropped INT that was as bad as it gets https://t.co/7jCebxP8jD

However, Pro Football Focus gave Jones his lowest grade of the season despite the production (51.9 out of 100). PFF knocked Mac for some luck on his hugely EPA-positive plays. Plus, the Pats’ rookie was 11-of-12 for 169 yards off play-action, with a season-high play-action rate (37.1%).

In other words, this wasn’t Jones’s best tape filled with high-end throws. Still, his overall decision-making and downfield accuracy were better than the PFF grade suggests.

For instance, PFF graded Mac’s 38-yarder to Jakobi Meyers as a “zero” throw, meaning it was a good decision and completion, but not a big-time throw because he threw behind Meyers.

In the play, the Titans are in a quarters structure where they initially have two deep safeties. Hunter Henry’s intermediate crosser draws the outside corner and cover-four safety to Mac’s left, opening up Meyers on the deep crosser against an out-leveraged Kevin Byard. The throw was a little close to Byard, but it has enough height and zip on it to beat the coverage.

Another downfield throw to Meyers that doesn’t go down as a “wow” play because it’s an open receiver still shows great overall process from the Pats’ rookie on the sail concept.

Agholor’s vertical route clears out the sideline for Meyers to run the corner pattern into the void in the zone coverage, while Bourne’s swing motion into the flat draws the two underneath defenders. Mac points his body towards Bourne to draw the short zones in that direction, then comes back to Meyers for the chunk gain, a great example of coverage manipulation by Jones.

Then, there were the strong throws off play-action, such as the play above where Jones puts the right amount of touch on the ball to get it over the linebacker to Jonnu Smith on the crosser.

There were some negatively graded throws and well-designed plays to present Mac with open receivers, which knocked down his PFF grade, but the Pats’ rookie did his thing on Sunday.

As we mentioned, a hugely positive development for the Patriots during their winning streak is that New England’s offensive line is once again pass protecting at a high level.

Jones was only under pressure on nine of his 35 drop-backs, or 25.7 percent, and the Pats got clean sheets in pass protection from left tackle Isaiah Wynn and right guard Shaq Mason.

One area where the O-Line has noticeably improved is against defensive line stunts, which plagued them earlier in the year, and teams continue to use against them.

Here, the Pats block a four-man rush out of empty with the five O-Linemen as the only blockers. They pass off T/E stunts on both sides of the line and give Mac time to hit Meyers in-stride.

Although the pass protection was solid, the Pats struggled in the first three quarters to generate movement in the running game. In particular, both tackles, Isaiah Wynn and Trent Brown struggled to win their one-on-ones and kick out the edges to open holes for the backs.

Overall, the Patriots found a way to move the ball through the air and protected Jones well en route to scoring 36 points against an above-average defense.

Two advanced metrics that explain the breakout season from first-year wide receiver Kendrick Bourne are his contested catch rate and YAC over expected.

Among 88 wide receivers, Bourne is tied for first in contested catch rate this season by hauling in eight of his nine contested targets, including a corner/fade touchdown grab on Sunday.

Along those lines, Bourne is also near the top of the leaderboard in yards after catch over expected, with a 41-yard catch-and-run play gaining 29 yards over expected.

Due to Bourne’s development in those two areas, he’s on pace for a career season.

The story of the game for the Patriots defense was allowing the second-most rushing yards of the Belichick era, with the Titans gaining 270 yards on the ground.

Tennessee didn’t amass 270 rushing yards with only a fluky long run or two, there was one of those on the 68-yarder before the half, but that wasn’t the only breakdown for the Pats defense.

The Titans had a 53 percent success rate on their 39 carries, 25 percent of their runs went for first downs, and they averaged 6.9 yards per rush; this was a systematic failure.

On tape, the biggest issue for the Patriots defense was also smart coaching by the Titans’ staff.

Titans head coach Mike Vrabel knew the Pats would force cutbacks on outside zone schemes by firing the play-side linebacker into the line of scrimmage to set the edge. The Titans had center Ben Jones turn out the Pats’ nose tackles and sent the backside guard through immediately to the second level to combat that strategy. When their ball carriers cut back, the defenders designed to close down the cutback lanes were blocked up by the Titans’ offensive line.

With strong running teams such as the Indianapolis Colts still on the schedule, it’ll be interesting to see how Belichick and New England’s coaching staff adjust to Tennessee’s strategy.

Although it wasn’t a big passing day for Titans quarterback Ryan Tannehill, the Patriots deserve credit for holding Tennessee to -0.31 expected points added per drop-back.

In a way, the Pats made up for the beating they took in the running game by shutting down Tannehill through the air and forcing four Titans turnovers to keep them out of the end zone.

With limited opportunities, New England’s pass rush wasn’t as potent as the last few weeks but still managed to pressure Tannehill on 30.8% of his drop-backs with two sacks.

Leading the way once again was Matthew Judon, who beat Titans right tackle David Quessenberry for a sack on Tennessee’s opening drive with a stab-rip move to turn the corner.

Quessenberry came into Sunday’s action having allowed seven sacks in pass protection this season, so you knew the Pats would try to get Judon one-on-one against the right tackle.

After logging another sack and three total pressures against the Titans, Judon now ranks third with 11.5 sacks and fourth with 55 quarterback pressures among all defenders in 2021.

Sticking with what was working in the previous five games, the Patriots opened the game with more early-down zone coverage to combat Tennessee’s play-action-heavy scheme.

However, in a dink-and-dunk strategy, Tannehill marched down the field on the Titans’ second drive by completing four passes, all under ten yards.

The Patriots shifted to more man coverage at that point, ending the game with a 52.4% man coverage rate, which is their highest since Week 5 against the Houston Texans.

One of the key man coverage plays was on a second-down play in a critical goal-line stand.

The Titans ran a switch release in the play where the inside receiver breaks out and the outside receiver curls back inside on the route combination. Pats linebacker Kyle Van Noy and safety Adrian Phillips exchange responsibilities perfectly, and KVN breaks up the pass in the end zone.

On fourth down, the Pats went back to zone coverage against boot-action. This time, Jalen Mills (outside CB) falls underneath the corner route, Phillips slides with tight end working across the formation, and Devin McCourty falls into the crosser window out of cover three. Although it’s zone, J.C. Jackson makes a heads-up play to run with the crosser since there’s no threat into his zone with the bootleg design and is there to pick off the tipped pass.

After making a few adjustments to defend short passes, the Pats’ secondary locked it down.