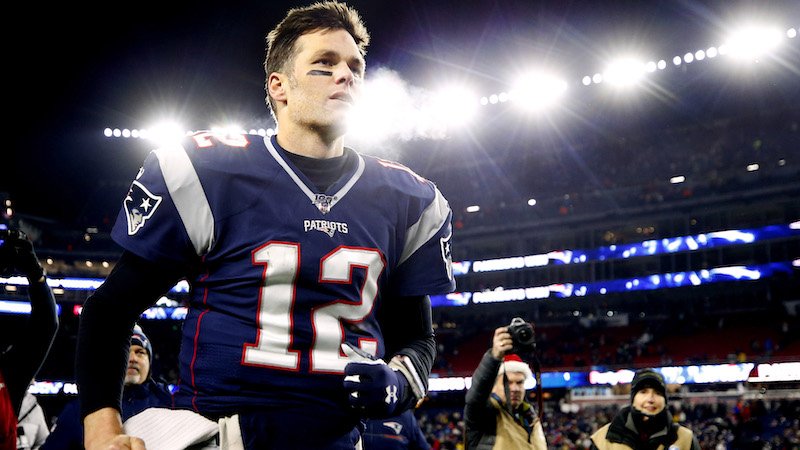 Below are a variety of advanced stats from the Patriots’ 24-17 victory over the Buffalo Bills.

The six-time Super Bowl champion put his recent struggles behind him with his most accurate performance of the season on Saturday against a terrific Bills defense.

Brady’s adjusted completion rate, which eliminates throwaways and drops from the equation for the quarterback, of 89.7 was a season-high for the 42-year-old Pats quarterback.

Based on my charting, Brady only had three inaccurate throws on the day, and those were all noticeably closer to completions than his season-high eight off-target throws in Cincinnati.

Although his ball placement was stellar, Brady didn’t attempt a single pass of over 15 yards in the air, which was likely the plan against a Bills secondary that doesn’t allow big plays.

The Pats quarterback averaged only 5.1 air yards per completion, but dominated on intermediate throws, finishing five-for-five, averaging 17 yards per pass attempt in the 10-20 range.

One of those intermediate passes was a far-hash out route from the slot to Julian Edelman that set up a more manageable field goal for Nick Folk. Edelman crosses over Bills cornerback Taron Johnson to get on his outside shoulder and then snaps the route off at the last second to create separation. Brady has plenty of arm to make the throw and puts it in a perfect spot.

Along with intermediate throws, Brady was excellent at operating with unblocked rushers in his face on short throws and screens.

Here, the Pats use a misdirection sweep on a terrific play design to get Rex Burkhead open on a wheel route. Brady pulls off a masterful elongated fake to hold the defense on the fly sweep and then hits Burkhead enough in stride off his back foot with a defender in his face for the Pats running back to turn up the sideline.

Lastly, Brady’s time to throw clocked in at 2.63 seconds, bringing his season average to 2.57, which ranks tied for tenth among qualified quarterbacks.

After a rough game against the Bengals and an ugly performance the first time around versus the Buffalo defense, Brady looked like himself again on Saturday.

For the second consecutive week, the offensive line kept Brady clean on over 70 percent of his drop-backs (26.5), registering their best pass-blocking efficiency rating since Week 3 (91.2).

The Patriots got clean sheets from Joe Thuney and Ted Karras, while Shaq Mason allowed only one hurry, and not a single offensive linemen was responsible for a quarterback hit on Brady.

With left tackle Isaiah Wynn, most of his breakdowns in pass protection come in two ways: either he doesn’t get enough depth out of his stance to cut off the angle, or he gets fooled by the scheme.

Here, the Bills show a blitz look with the linebacker aligned directly behind the defensive tackle shaded over Thuney. Wynn gets caught peeking inside thinking the blitz is coming, he’d pick up the blitz and force the rush to come from the edge, but Milano drops into coverage. Hughes hurries Brady, but the Pats QB still completes the pass to Sanu.

Wynn is still grading out well and passing the eye test as a reliable blindside protector for Brady, but these mental breakdowns serve as a reminder that he is only seven games into his career.

The Pats left tackle is still seeing and learning new things as defenses give him different pressure looks.

In the slot, the Patriots got fantastic production out of multiple receivers with 114 of Brady’s 271 passing yards going to receivers between the numbers.

Edelman (72 yards) and Jakobi Meyers (26) were the big winners from inside the formation, and Brady hit both slot wideouts on one of New England’s favorite play-action concepts.

Brady averaged 14 yards per pass attempt with a 152.1 rating off of play-action on Saturday.

On two completions to Edelman and Meyers, Brady and the play fake got the Buffalo linebackers to step up against the run, leaving the middle of the field wide open behind them. Out of the slot to the two-receiver side, Edelman and Meyers each run over routes, which are intermediate crossing patterns, and there’s nobody there to pick them up.

If the Patriots offense can continue to produce out of the slot, the unit will resemble what we are accustomed to seeing in New England out of Tom Brady and company.

On the defensive side of the ball, the Patriots didn’t come after Bills quarterback Josh Allen with blitzes as expected, only sending extra rushers on ten of his 31 drop-backs.

New England relied on four and five-man pressures, aligning five or six players on the line of scrimmage, and stunting their rushers while others dropped into coverage.

On Dont’a Hightower’s second-quarter sack, the Patriots put five rushers on the line of scrimmage, and Hightower wraps around penetration by Jamie Collins and Adam Butler to bring down Allen. In their stunt schemes, the Patriots will wrap opposite the running back, which is why Hightower is the wrap player rather than Collins; those two are interchangeable based on the offensive formation.

Here’s another critical pressure by Hightower, who tied a team-high with three quarterback disruptions. This time, the Patriots only rush four and lose Cole Beasley in man coverage, but Hightower breaks through the line on a TEX stunt to force a bad throw from Allen.

Although the Patriots only blitzed Allen on a third of his drop-backs, they did bring a zero blitz on the final offensive play for the Bills.

The Pats walk seven rushers up to the line of scrimmage against six Bills blockers, including the running back. Either way, there will be an unblocked rusher, but Buffalo tries to catch the Patriots by releasing the running back out of the backfield on a vertical route. Patriots safety Duron Harmon makes an extremely heady play to back off the rush and pick up the back. Jamie Collins still applies pressure on Allen, and JC Jackson breaks up the heave.

Against the run, the Patriots held rookie running back Devin Singletary to 3.1 yards per rush, as Buffalo’s team rushing average was inflated by a few big gains by Allen on designed QB runs.

Leading the way for the Patriots was once again defensive tackle Lawrence Guy, whose play strength and ability to keep his pads low make him impossible to move off the ball at times. Guy breaks down the double-team on the play above by firing low into the weak point of the combo block and brings down Singletary for no gain.

The Patriots didn’t have their most disruptive game of the season in the front seven, but they had terrific discipline in their rushes and came up with some timely pressures.

In the secondary, All-Pro cornerback Stephon Gilmore’s quest to go the entire season without allowing a touchdown in coverage came to an end on Saturday.

On John Brown’s only reception of the game, he beat Gilmore for a 53-yard touchdown on a terrific route where he faked a corner route than broke it off on a post. Gilmore was in man coverage on the play, and it looks like safety Devin McCourty, who is in the middle of the field, steps up to play the crossers in an aggressive coverage. Ultimately, Gilmore might’ve expected safety help, but it was man, and he got beat. It happens.

Later on, the Bills tried to hit Brown again on the same play, and Gilmore and Duron Harmon defended it well.

Along with the rare breakdown for Gilmore, we also saw the importance of Jonathan Jones to this secondary, as JC Jackson and others had trouble tracking Bills slot receiver Cole Beasley.

Beasley is a tough cover for anyone in man-heavy schemes, and some of his grabs came against zone or late in the down, but when Jackson couldn’t get his hands on him early, Beasley was too shifty for the second-year cornerback.

Although it wasn’t their best days, the dynamic duo of Gilmore and Jackson still forced as many incompletions as passes completed into their coverage, and Jackson had two breakups as well.

Moving forward, the Patriots would benefit significantly from reestablishing their depth with hopefully the returns at a full capacity of Jones and veteran Jason McCourty.