Advanced Stats Report: How Big of a Problem is Cam Newton’s Accuracy? 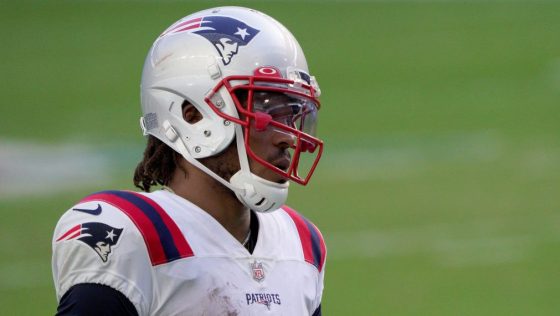 Below are various advanced stats from the Patriots’ 22-12 loss to the Dolphins in Week 15.

The discussions surrounding Patriots quarterback Cam Newton are all over the map; it’s truly one of New England sports’ most polarizing topics.

Those who feel Newton’s accuracy is horrendous are exaggerating a bit, and once you tweet or write that every throw is off by ten yards, you lose me; it’s just not the case, so stop it.

As always, the truth is somewhere in the middle. Newton did make several good throws against the Dolphins. Both within the offense structure and by creating outside the scheme.

However, he’s also hurting the offense in some instances with poor timing on his throws and isn’t maximizing opportunities that present themselves.

Above are two plays that present Newton with a shallow crosser. The first is a mesh concept where, by the time he delivers to Byrd, the linebacker is all over the Pats wideout. On the second play, N’Keal Harry is seven steps into his route before Newton throws him the ball, and again, there’s a limited chance at YAC on a play where there are potentially more yards to be had if the ball gets there sooner. There’s nothing wrong with the placement on those two throws, but they’re too late.

Then, Newton is often asked to have perfect ball placement due to lacking skill talent, and he isn’t making enough of those plays either.

Here, Newton decides to give rookie tight end Dalton Keene a chance on a seam route against former Pats DB Eric Rowe. Rowe has good coverage, and there isn’t much room to fit the ball, but a great throw gives Keene a chance to go up with two hands. Instead, Keene tries to attempt an acrobatic one-handed catch, and the Pats settle for a field goal.

There’s absolutely an onus on Newton with this group to make some very challenging tight-window throws, but he’s not.

Newton is tied for 30th with nine big-time throws this season, according to Pro Football Focus.

Despite holding the ball for an average of 2.94 seconds with an average intended air yard of 9.1, Newton was only under pressure on 31.3 percent of his 32 drop-backs.

Patriots center David Andrews, who left the game with a calf injury, had a tough time against Dolphins nose tackle Raekwon Davis, while rookie left tackle Justin Herron was shaky.

The wheels didn’t completely fall off for Herron as a sack and two hurries in his first NFL start isn’t a complete disaster, but he had trouble protecting his edge in pass protection.

Here, the Pats are trying to dial-up a big play with a seven-step drop off play-action. Herron has help inside from Joe Thuney but gets beaten outside by Dolphins’ defensive end Zach Sieler. In this instance, it looks like Herron gets snatched a bit by Sieler with his weight getting too far forward, and then his feet get sloppy as he narrows his base once he’s off-balance, and Sieler goes around him. The rule of thumb for tackles is to push your guy ten yards past the quarterback, which Herron wasn’t able to do there.

Although the stat-sheet wasn’t friendly to Herron, he helped himself out with a few great double-team blocks working alongside Joe Thuney. Above, Herron and Thuney spring Sony Michel for 16 yards with an excellent combination block.

Herron was far from perfect against Miami on Sunday, but he’s developing nicely for a sixth-round pick and should start the rest of the season.

Another silver-lining from the Dolphins’ loss was an outstanding performance by second-year wideout Jakobi Meyers, who is on a terrific nine-game run since his playing time increased.

Since Meyers became a regular in Week 9, he’s averaging 5.3 receptions and 67.7 receiving yards per game, which looks like this stretched out over 16 games: 85 catches, 1,083 yards.

There are some caveats there with a solid NFL receiver getting force-fed in a lousy offense, but Meyers is producing at a rate that would’ve put him over the 1,000-yard mark, not too shabby.

Meyers also averaged 3.51 yards of separation on his ten targets, well above league-average.

We’ll get a better look at Meyers’s downfield routes on the all-22, but he introduced himself to Dolphins Pro Bowler Xavien Howard on the short stuff right away on Sunday.

On this 11-yard catch, Meyers runs a three-step slant. He paces his release to slow-play the route while gaining ground to get on Howard’s toes, then accelerates through a crossover break to get Howard on his heels and win inside.

The Patriots will want to slot Meyers into a more natural spot on the pecking order moving forward, something like a #2 or #3 option, but he’s worth keeping around.

New England limited Dolphins rookie quarterback Tua Tagavoila to 0.01 EPA per drop-back and 5.6 yards per attempt, but unfortunately, that wasn’t the game story.

The Patriots’ front seven applied pressure on Tua on 34.5 percent of his drop-backs and got some flashes from rookie Josh Uche, and Adrian Phillips got his first career sack as well.

However, the run defense was exploited once again in various ways with plenty of blame to go around. Some of it is personnel, and some was on coaching.

Let’s start with the coaching, where the Pats have been out-schemed on the ground in two-straight games. Rams head coach Sean McVay utilized man or gap schemes to get his run game going, then added on blockers in outside zone to attack the Patriots’ DBs in the run game.

On this third-and-1 play, the Patriots are in a 4-2 EX front with only two defensive tackles with their hands’ in the dirt and defensive backs in pivotal roles in the run fit. New England assumed their defensive line would win matchups against Miami’s offensive line, which didn’t end up being the case, and Miami ran on these light boxes. Still, a six-man box with two down defensive linemen on third-and-1 is tough for the players out there to come up with a stop.

Here’s another example later on, where the Patriots were in the same front on second and short. This time, New England ran a T/E stunt on the left side, typically a passing down scheme, and the movement of the defensive line leaves the edge exposed for a big gain. Bad play call given the down and distance.

Those are two examples where the play call didn’t put the players in a position to succeed, but we are also seeing a unit that isn’t consistently getting off blocks.

Above, the Dolphins ran split-flow zone with the tight end coming across the formation to kick-out the backside defensive end. The Pats have three one-on-one’s here, with Adam Butler singled on the right guard, Shilique Calhoun stepping into the tight end, and linebacker Terez Hall at the second level dealing with the climbing right tackle. None of those three get off their blocks, and Miami running back Matt Breida has a huge hole.

Based on the fronts and personnel packages, New England’s coaching staff game-planned for the Dolphins to lean on their passing attack and weren’t prepared for 42 carries.

And as we mentioned earlier, the Pats probably liked the matchups their defensive linemen had with Miami’s offensive line. Unfortunately, the Dolphins’ O-Line won in the trenches.

As we already knew, the Patriots have a ways to go when it comes to rebuilding their front seven.

New England’s pass defense wasn’t an issue in Sunday’s loss to the Dolphins, although they did have some trouble defending passes into the flats in the first half.

Miami’s opening script featured a heavy dosage of bootleg actions with a slide route by either a motioning wide receiver or tight end. The Patriots let those slide routes out unimpeded into the flats, and that gave them a head of steam to make something happen as ball carriers.

Once they got that under control, the Pats locked down Miami’s passing game on the whole.

New England used its eight-man coverage structures in critical third-down situations, where they play cover-1 man in the backend with their edge defenders dropping into short zones off the line. The unexpected zone-droppers caused Tua to hold the ball, and the downfield coverage was too good to find an open receiver.

With Stephon Gilmore’s quad injury ending his season, the final two games should allow the Patriots to see what they have in some of their depth players in the secondary.

For instance, UDFA rookie Myles Bryant has played well when given a chance, and second-year corner Joejuan Williams was inactive for Sunday’s loss to the Dolphins.

Bryant’s role should expand while Williams might get an extended opportunity at outside corner with Gilmore out.