Advanced Stats Report: Patriots Both Win and Lose the Middle of the Field 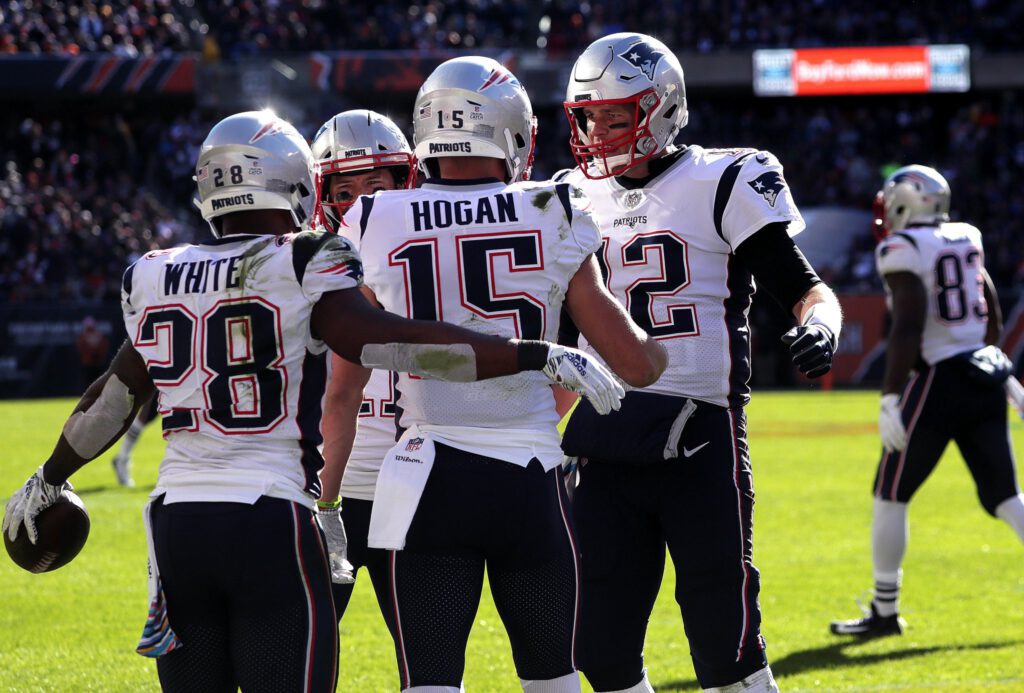 Below are a variety of advanced stats from the Patriots’ 38-31 win over the Bears.

Entering Week 7, the Bears defense, as I detailed in my Patriots gameplan, allowed 8.7 yards per attempt on passes in the middle of the field.

On Sunday, it appeared that the Patriots saw similar flaws in the Chicago pass defense as Tom Brady threw for 231 of his 277 yards attacking the middle of the Bears defense (83 percent).

Furthermore, only ten of Brady’s 36 pass attempts went to the perimeter, and he averaged 8.9 yards per attempt throwing right down the heart of the Chicago defense.

Brady was most successful targeting the underneath areas of the Bears defense as he completed 16 of his 19 passes for 136 yards and all three of his touchdowns in the short-middle portion of the field.

Patriots running back James White’s first touchdown was a perfect example of the issues the New England offense presented for Chicago.

The Bears are in man coverage down by the goal line which leaves White in a one-on-one matchup with linebacker Leonard Floyd. Brady quickly goes through his reads and finds White on the backside of the formation for an easy touchdown.

In the time to throw department, Brady kept at his usual pace for the season clocking in at 2.40 seconds from snap to release.

Brady now has the second-fastest release in the NFL at 2.38 seconds on this season only behind Bengals quarterback Andy Dalton (min. 50 percent of teams snaps).

Although Bears star pass rusher Khalil Mack was limited, the Patriots offensive line still deserves credit for making things relatively easy for Brady in this one.

Brady was only under pressure on ten of his 38 drop-backs (26 percent) and none of his offensive linemen surrendered a quarterback hit.

On Chicago’s lone sack of the day, the Bears did a great job of disguising Roquan Smith’s rush by looping him around two interior linemen. The Patriots slide the protection to Brady’s left and assign running back James White to pick up the free rusher on the backside of the formation. However, Smith comes around, and White runs past the most immediate threat to Brady (Smith) to block the defensive end. Although White should’ve taken the first defender, Smith, it’s also a well-disguised blitz by the Bears coaching staff that appeared to fool Brady on the protection scheme. And even if White does take Smith, that would’ve left the end unblocked; he was in a lose-lose situation. On the stat sheet, it’s impossible to assign blame for this with multiple factors at play.

On a positive note, this was arguably Trent Brown’s best performance of the season on Sunday. The Pats left tackle led the offensive line with a 72.3 overall grade and a stellar 88.3 pass blocking grade. The fourth-year pro continues to get better every week.

Brady did face some interior pressure from Bears defensive tackles Eddie Goldman (three pressures) and Akiem Hicks (two pressures), but he was given plenty of time to operate by his offensive line.

As you’d expect from Brady’s passing chart, it was a big day once again for the Patriots in the slot.

In the first half, wide receiver Julian Edelman hauled in three of his five catches from a slot alignment on Sunday.

However, in the second half, the targets went to fellow wideout Chris Hogan because of the attention on Edelman without tight end Rob Gronkowski in the lineup.

On Hogan’s longest catch of the day, a 20-yard completion with another 15 yards tacked on for a face mask penalty; Hogan is left wide open by the Bears defense as two defenders run towards Edelman in the near slot at the top of the screen. Chicago is in a zone defense, and the defender lined up over Hogan drops into a flat zone meaning the linebacker on that side of the field was likely supposed to be where Hogan ends up on the play.

Although Edelman didn’t have a big day statistically, he drew multiple defenders in coverage on a regular basis.

The issues with the Patriots’ pass rush containing Bears quarterback Mitchell Trubisky are well documented at this point, and I went over them in my ten things following the game on Sunday.

Instead of talking about that again, let’s talk about some of the things that did work and some interesting wrinkles in the game plan.

In all, Trubisky was pressured on 34.4 percent of his drop-backs, a good, not great number, but it was how the Patriots disrupted Trubisky that’s interesting.

The Patriots, typically a defense that doesn’t blitz often, blitzed Trubisky on 21 of his 58 drop-backs (36.2 percent).

The game plan was clear: the Patriots knew that if they pressured Trubisky, he’d struggle, and struggle he did with a 40.5 PFF grade under pressure and an abysmal 27.6 grade when blitzed.

The Patriots mainly blitzed from the secondary, and as a result, four New England defensive backs recorded a pressure on Sunday.

Here’s an excellent example of how the Patriots utilized their defensive backs in blitz packages. Slot corner Jonathan Jones is going to blitz off the left side of the defense. At first, as was the theme of the day, Trubisky was able to elude the rush, but Jones does an excellent job of getting off the ground and chasing Trubisky down from behind to hit him while he releases the football. The Patriots were undisciplined in their rush lanes for most of the day, but they had a good plan to limit the Bears offense through the air by putting pressure on the quarterback.

Lastly, on the defensive line, defensive end Trey Flowers continues to lead the way for the Patriots with a team-high six pressures and two run stops and is undoubtedly one of the most underrated pass rushers in the NFL.

There’s a lot to unpack with the Patriots’ coverage stats, but let’s start with the positives.

Patriots cornerback Stephon Gilmore claimed another victim on Sunday when he erased Bears wideout Allen Robinson from the game.

Gilmore allowed one catch for eight yards into his coverage, which wasn’t to Robinson, but Bears quarterback Mitchell Trubisky was 0-4 targeting Robinson with Gilmore in coverage.

Over the last two weeks, the Patriots asked Gilmore to shadow Robinson and Chiefs wide receiver Sammy Watkins without much help, and the Pats corner allowed two catches for 18 yards to the two big-money wideouts.

Gilmore also should’ve picked Trubisky off on a pass intended for Robinson in the red zone. He baits Trubisky into the throw perfectly and jumps the route to break up the pass. Gilmore was hard on himself after the game for not hauling in the interception and said that he lost the ball in the sun at the last second.

Although Gilmore was fantastic, the Patriots’ coverage on Bears tight end Trey Burton left something to be desired.

Burton caught passes on six different Patriot defenders, and although some of them were in soft zone coverages protecting against the big play, the Pats have struggled this season with covering tight ends.

The Patriots have allowed the most receiving touchdowns in the NFL to tight ends this season (five) and rank 24th in yards allowed to the position (455).

Safety Patrick Chung, who allowed only one catch for two yards to Burton and broke up a pass intended for the tight end, has often been the Pats kryptonite for opposing tight ends.

However, due to the Patriots’ lack of speed at linebacker, when the team plays an opponent with a pass-catching running back of Tarik Cohen’s caliber, they often move Chung onto that match up instead.

The Patriots may have to use either cornerback J.C. Jackson or Eric Rowe on tight ends in the future with their linebackers and safety Devin McCourty struggling to keep up with the big pass-catchers in coverage.