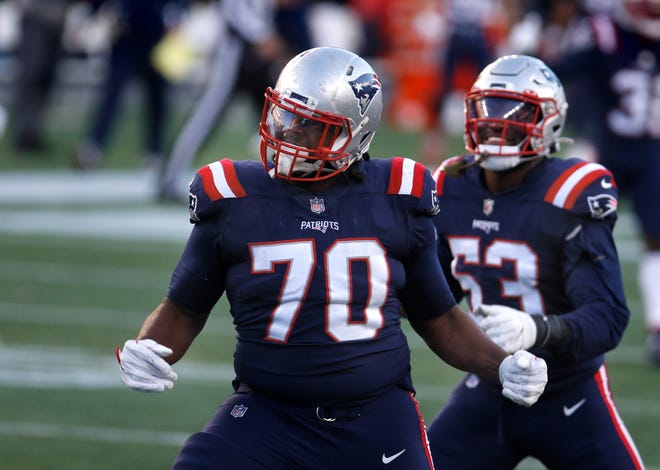 Below are various advanced stats from the Patriots’ 20-17 win over the Cardinals in Week 12.

After a strong performance last week, Patriots quarterback Cam Newton had one of his worst games of the season against the Cardinals.

The former MVP generated -0.45 expected points per drop-back and had his worst performance of the year in terms of completion percentage over expected.

Newton’s downfield accuracy was erratic, but based on the TV copy, he also struggled with timing, decision making, and awareness.

Here, the Cardinals bring a simulated pressure by dropping the defensive end to Newton’s right off the line and blitzing the off-ball linebacker, which puts James White in pass protection. It’s a single-high, off-man coverage and the Pats run a levels concept with two dig routes starting on Newton’s right and a deep post route by Damiere Byrd on the left. The coverages closes the field on the dig routes, and the only opportunity is potentially Byrd on the post. However, Newton steps up into a sack with White giving ground to De’Vondre Campbell. Ideally, Newton would recognize the escape route to his left where there’s room to run, but those are the little things that are costing this offense.

We’ll know more about Newton’s passing struggles after reviewing the coaches tape, but it was interesting that offensive coordinator Josh McDaniels only called four play-action passes.

Entering Week 12, Newton led the league with 39% of his drop-backs coming off play-action, yet they weren’t a significant part of New England’s game-plan on Sunday.

My theory is that McDaniels was concerned about longer developing route combinations and drop-backs against the Cardinals’ blitz-heavy scheme, but the Pats thrive on play-action.

One of those designs was a new quarterback lead play, which gives New England a numbers advantage with the offense plus-one in the box due to the quarterback toting the rock.

Newton’s 14-yard run on what might’ve been a keep the entire way based on the blocking scheme was also a massive play in the game, setting up Nick Folk for his game-winning field goal following a penalty on Cardinals rookie Isaiah Simmons.

The Patriots quarterback was solid over the last month before Sunday, so for now, we’ll give Newton a pass for a stinker since every player is entitled to a bad game.

With two of the three sacks on the quarterback, Newton was only under pressure on five of his 19 drop-backs where the Pats QB didn’t run himself into a messy situation.

On Newton’s first interception, the Cardinals brought a blitzer from off the line with right tackle Michael Onwenu correctly blocking the defender on the line of scrimmage. Unfortunately, White goes outside instead of staying inside to pick up the blitz, and Newton’s arm is hit as he throws.

Other than that, Newton had the time to make throws, with a clean sheet from right guard Shaq Mason and only one hurry allowed apiece for Joe Thuney, David Andrews, and Onwenu.

Before we look at the chart, let’s get it out of the way: N’Keal Harry was blanketed by the coverage on all three of his targets and struggled to create separation on Sunday.

Now here’s the chart, which shows that Harry only created 0.99 yards of separation on his three targets, which is well below the league average of 2.86 yards, according to NextGen Stats.

Newton didn’t do him any favors with an errant throw on a slant pattern that made the catch much more difficult than it needed to be for Harry. Still, Harry continues to struggle and hasn’t improved much at all as a route runner despite making gains in the offseason, or so it appeared.

Back to the positives, wide receiver Jakobi Meyers is still creating some good separation, and Newton also would have made life easier with improved timing on throws to Meyers and Byrd.

Here, Meyers gains 17 yards on a quick post or glance route, where he charges off the line to eat up Patrick Peterson’s cushion, gets on Peterson’s toes, gives him a nice fake to get Peterson leaning outside, and breaks on the seven-step route.

The Pats only threw the ball 18 times because their offense couldn’t stay on the field, but Meyers and Byrd had some opportunities.

The story of the game for Bill Belichick’s defense was a monster performance by the defensive line, led by stalwarts Adam Butler and Lawrence Guy, who filled the stat sheet.

Butler was tied for the team-lead with three quarterback pressures, including a sack, batted a pass that turned into an interception, and had two tackles for loss against the run.

Cardinals quarterback Kyler Murray was only under pressure on 23.1 percent of his drop-backs, but it caused several negative plays and affected the game more than the stats show.

The Patriots cycled through different pressure schemes based on their cover-zero blitzes to confuse Murray and hurry him into mistakes.

Here, the Cardinals are in an empty formation with Murray alone in the backfield, and when the tight ends release downfield, it turns into a five-man protection. The Patriots bring six, knowing they’ll have an unblocked blitzer, and rookie Josh Uche hurries Murray into a negative scramble.

One of the best aspects of New England’s cover-zero designs is popping out blocked rushers into short zones to take away the quarterback’s “hot” reads over the middle or his quick outlets.

The Patriots teach their pass-rushers to get offensive linemen to engage them in pass protection. Once they engage, and you are blocked, then drop into coverage.

On Adrian Phillips’s interception, the Patriots ran a cover-zero “bluff” pressure. This time, the Pats show cover-zero, but Phillips and linebacker Ja’Whaun Bentley drop into underneath zones. Murray wants to throw to either DeAndre Hopkins or Andy Isabella on the underneath mesh concept, but Bentley is in the passing lane, so he hesitates. The hesitation gives Butler some added time to get into Murray’s face, and Butler tips Murray’s pass into Phillips’s lap.

New England also ran a series of simulated pressures, where they drop a defender off the line that would usually rush into coverage. At the same time, an unsuspected blitzer goes after the QB.

Phillips drops into coverage on the quarterback’s right in this play, while Winovich rushes over the guard from a two-point stance. Butler occupies the left guard and center as the penetrator on a stunt scheme with Wino, and the Michigan man goes through the middle unblocked when the right guard is late to rotate over because of the scheme.

The Patriots caused plenty of negative plays with their pass rush, even if their pressure percentage doesn’t indicate a super productive day.

As I wrote in my ten things, Bill Belichick identified Murray as the most dangerous ball carrier on Arizona’s roster, and for a good reason.

Murray is equal parts elusive and fast in the open field, so Belichick made sure to force the Cardinals’ running backs to beat him on read-option plays rather than the quarterback.

By allocating at least one defender to setting the backside edge against Murray, the defenders in the box were often out-numbered by the blockers, but Lawrence Guy and co. did their thing.

Here, the Cardinals tried to run zone-read with two “escort” blocks for Murray on the edge. However, Winovich sets a wide and firm edge, giving Murray a “give” read to the running back. Guy and Akeem Spence eat the inside zone combo blocks on the line, allowing Bentley to stay clean and mirror the running back at the second level.

However, the Pats didn’t overreact to the pullers and still forced Murray into handoffs, and then made stops on the backs.

Above, New England goes with dual edge-setters with John Simon and Adrian Phillips influencing Murray into a handoff. Winovich does an excellent job of stepping into the pulling guard, disrupting the tight ends’ block in the process, and his teammates rally to make the tackle short of the line to gain.

Based on the injury report and pre-game warmups, Murray dealt with some right shoulder pain that might’ve prevented him from pushing the ball downfield on Sunday.

Still, the Patriots held the Cardinals quarterback to 0.07 expected points added and 5.0 yards per attempt and got a great effort from top cornerbacks Stephon Gilmore and JC Jackson.

Gilmore was flagged for two penalties in coverage, but he allowed only three catches for 26 yards against All-Pro receiver DeAndre Hopkins without much help over the top.

Here, Gilmore is isolated on Hopkins in the red zone. The Cardinals wideout tries to get Gilmore to move inside in his release to open a passing window to the pylon on a fade pattern. In a vintage rep, Gilmore stays square to the line through Hopkins’s release, forcing D-Hop to declare his route, and then smothers the fade in Hopkins’s break to make it a low-percentage throw.

Although the all-22 will tell the full story, the Patriots seemed to improve in the middle of the field coverage as well.

New England’s coverage, aided by their pass rush, was significantly better than what we saw against the Texans last week.