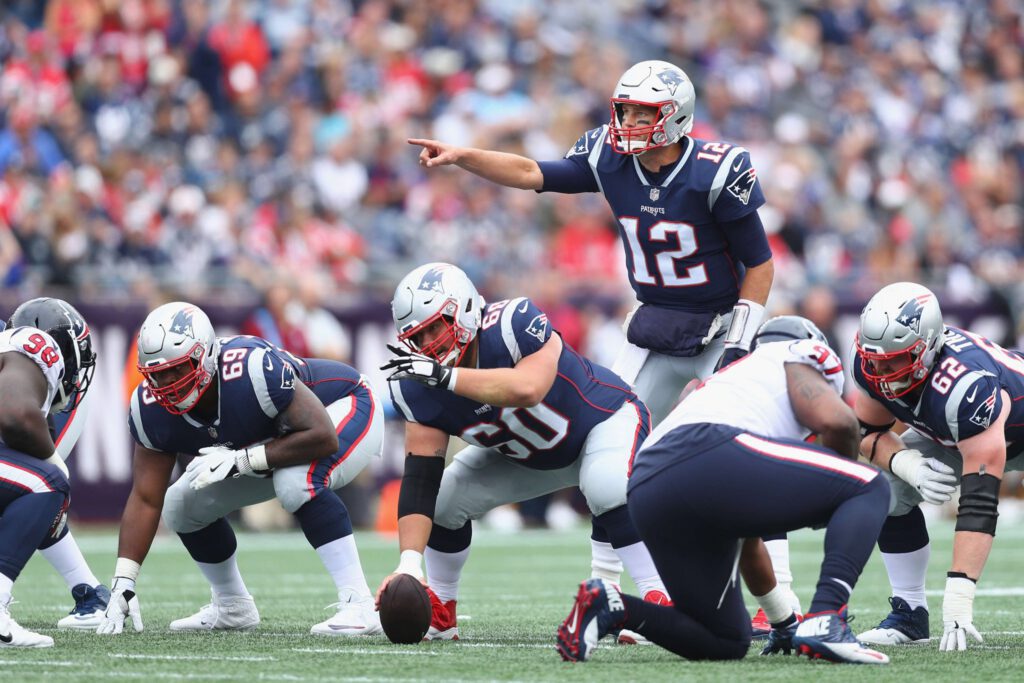 Below are a variety of advanced stats from the Patriots’ 27-20 win over the Texans on Sunday.

Tom Brady and the offense’s performance against the Texans on Sunday may not have pleased the five-time Super Bowl champion, but the statistics still look MVP-like.

As you can see above, Brady not only completed passes to eight different receivers but also attacked almost every quadrant of the Gillette Stadium field on Sunday. ,

Brady was particularly dominant throwing to the deep middle portion of the field to tight end Rob Gronkowski, completing three of four passes for 83 yards and a 116.7 passer rating.

Moving on to Brady’s pressure statistics, the Pats quarterback was only two for five averaging 4.0 yards per attempt on seven drop-backs under pressure.

However, when blitzed, Brady had a passer rating of 113.8 against the Texans.

Finally, as you’d expect, Brady had a quick release against the Texans vaunted pass rush with an average time to throw of 2.38 seconds (time to throw = how long it takes Brady to release the football from snap to release).

The Patriots offensive line had a terrific performance in pass protection against J.J. Watt, Jadeveon Clowney, and an excellent Houston pass rush only allowing seven pressures on the day.

The Texans didn’t register a quarterback hit on Tom Brady until 6:06 remaining in the third quarter, and although Houston finished strong, the Pats offensive line deserves a lot of credit for its effort on Sunday.

Brown spent most of the day dealing with 2014 number one overall pick Jadeveon Clowney and only allowed one hurry the entire game. The Pats’ new left tackle was consistent with his technique throughout the game, something that I was concerned about going in, and showed tremendous patience and decision making out of his pass sets.

As you see here, Brown also delivered some heavy punches on Clowney which left the Texans pass rusher stunned with the hulking tackles immense strength. Overall, there was a lot to like about Brown’s performance.

Lastly, the right tackle position was the only area to struggle relatively with the Texans pass rush, and that’s mostly due to the excellence of J.J. Watt.

Watt was able to pressure Tom Brady a handful of times rushing on both starting right tackle Marcus Cannon and backup LaAdrian Waddle.

After reviewing the tape, the pressures that both tackles allowed were in one-on-one situations matched up against Watt, and those were plays where Watt deserves most of the credit.

The Patriots offensive line new going in that this would be a stiff test against the Houston front, and they passed it with flying colors from this perspective.

Without Julian Edelman, the slot wasn’t a friendly place for the Patriots wide receivers,.

Chris Hogan ran 20 of his 40 receiving routes out of the slot and Tom Brady wasn’t able to connect with Hogan on either of his targets from inside the numbers.

However, the good news is that Rob Gronkowski continued his typical dominance when lining up in the slot.

Against the Texans, Gronk averaged 4.46 yards per route run out of the slot with two receptions for 58 yards.

Gronk’s two longest catches of the day, his ridiculous second-quarter grab and a perfectly thrown seem pass by Tom Brady, both came out of the slot.

The Patriots always move Gronk around the formation to dictate matchups, and Sunday against Houston was no different.

If Rob Gronkowski was the best player on the field on Sunday, Patriots defensive end Trey Flowers was a close second.

On his fourth-quarter sack, Flowers patiently waited for Texans right tackle Julie’n Davenport to throw his punch and then used a two-handed swipe move to clear Davenport’s hands before bending around the edge to get to Watson. After the game, Flowers told me that the key for the Patriots’ pass rush against the Watson was to wrap tight, meaning taking the shortest possible route to the slippery quarterback, and this sack is a perfect example of that.

Along with Flowers, the Patriots got solid contributions from Deatrich Wise, Adrian Clayborn, Kyle Van Noy and Malcom Brown in a balanced pass-rushing attack.

In the run game, rookie linebacker Ja’Whaun Bentley stood out with four run stops and also received an 89.3 overall grade from Pro Football Focus, a game-high among Pats defenders. Bentley continues to impress.

Overall, the advanced stats backed up the narrative that the Patriots front seven was terrific against the Texans.

In the secondary, the Patriots performed well, although Texans quarterback Deshaun Watson’s accuracy was poor throughout the game.

Starting with top corner Stephon Gilmore, the advanced stats don’t do Gilmore’s performance justice as you’ll see that he allowed a team-high 50 yards into his coverage. Gilmore spent the majority of the day shadowing Texans wideout DeAndre Hopkins, and played very well in the matchup whether it was man or zone.

Gilmore also made a great read on his interception to come over from the far boundary after passing Hopkins off to Duron Harmon as the Pats played a cover-3 scheme. Gilmore read Watson’s eyes and was able to track the ball in the air before intercepting the pass in the back of the end zone.

Another standout performer from this perspective was slot cornerback Jonathan Jones.

Patriots head coach Bill Belichick had high praise for Jones in his post-game press conference, and it makes sense why the team is so excited to have the speedster back from injury. Jones is a terrific football player.

To close it out, it’s worth mentioning that the Texans’ lack of a middle of the field threat cost them against the Pats on Sunday.

The Patriots linebackers held up well in coverage, as you can see in the stats above, but they weren’t tested by Houston’s running backs and tight ends.

Although the Pats linebackers deserve credit, it will be interesting to see if they can continue their strong play in coverage against teams with players capable of taking advantage of their deficiencies.