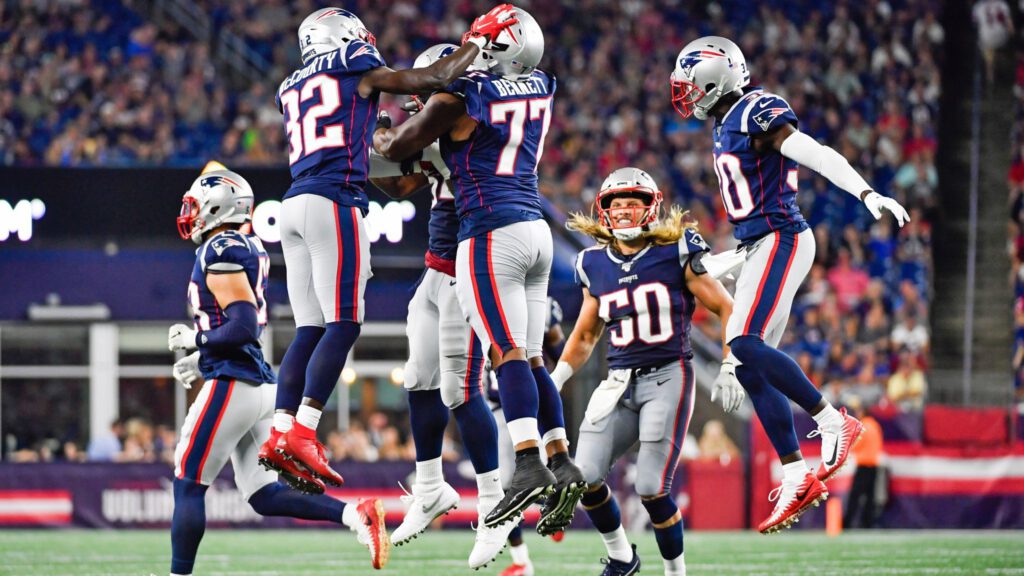 Below are a variety of advanced stats from the Patriots’ 10-3 victory over the Carolina Panthers.

We got our first look at a 42-year-old Tom Brady on Thursday night, and he was the same as 41-year-old Brady.

The Pats quarterback put on a preseason clinic of how to get in live game reps without risking injury, and he made a few great plays along the way as well.

Brady was three-of-six on passes of ten or more air yards, but one of those incompletions came on a poor decision by rookie Jakobi Meyers to stop his route.

The six-time Super Bowl champ’s longest throw of the night came on a deep stop route to Phillip Dorsett.

The Panthers were in a cover-3 zone structure with the corners in off coverage. Dorsett sold a go route, and then stopped in front of the defender. In the pocket, Brady felt some late pressure coming up the middle and quickly unloaded the pass to Dorsett. Despite the pressure, Brady was able to throw the ball over 20 yards in the air without fully stepping into the pass. Not bad for an old man.

Brady then followed that up with an absolute rocket up the seam to tight end Ryan Izzo on the lone touchdown drive of the game.

In the time to throw department, Brady clocked in with a 2.53-second average, slightly above his average from last season (2.45 seconds). We’ll see you in Week 1, Tom.

As for rookie Jarrett Stidham, it was his worst performance of the preseason so far, but it wasn’t all bad.

Like many young quarterbacks, Stidham is still learning to make safer decisions with the ball, but his arm talent and accuracy were still impressive.

On one of his four completions of ten-plus air yards, Stidham threw a perfect ball to Meyers on a crossing route.

First, Stidham found the safeties and looked to the left sideline at the top of his drop. By staring down Dorsett on the sideline, the single-high safety starts flowing in that direction, away from Meyers. Stidham comes back to Meyers and throws an absolute dart to the rookie. He has shown the ability to move safeties with his eyes in the preseason.

Stidham’s time to throw was similar to Brady’s at 2.62 seconds on average. He’s making quicker decisions in the pocket, but they aren’t always the right ones, typical of a rookie.

In pass protection, the starting offensive line for the Patriots nearly pitched a shutout.

The lone pressure allowed by the starting five was a hurry on Brady on the Dorsett completion shown above (Shaq Mason).

We also got to see 13 pass-blocking snaps for starting left tackle Isaiah Wynn, and as the chart above shows, he was clean on all 13.

Here’s a great example of Wynn’s pass-blocking prowess on the Meyers route referred to earlier. As you can see, Wynn makes up for smaller kicks out of his stance by firing his outside foot twice as he comes back of the ball. Bigger guys only need to kick once, but as long as you get to your landmarks as Wynn does, it doesn’t matter. Wynn hits his landmark, putting himself squarely between the rusher and Brady, and then shows tremendous balance and lateral agility to slide in pass protection. He also gets an excellent two-hand punch in to control the rusher. Wynn’s technique is flawless.

Although the starters were great, the backup offensive line had a shaky performance against Carolina.

The left side, in particular, had a difficult time blocking Panthers rookie Brian Burns and company as rookie Hjlate Frohodlt (team-high three pressures) got beat a few times by Carolina’s top pick.

A small speed bump on the road to Canton for the Danish Destroyer.

In the slot, the Patriots had their tight ends involved in the passing game.

Notably, tight end Ben Watson ran six of his eight routes out of the slot, only logging five snaps as an in-line tight end (three as a blocker).

We’ll see if that continues when Watson returns from his four-game suspension, but Gronk was always dominant working out of the slot. Maybe, the Pats will do the same with Watson.

As for undrafted rookie Jakobi Meyers, he struggled with Tom Brady but caught three passes from Jarrett Stidham from inside the formation.

The Meyers to Stidham connection has been on fire all preseason with Meyers’s 97 receiving yards from the slot ranking third in the entire NFL in August.

The Patriots’ pass rush was on fire once again pressuring Carolina’s quarterbacks on 42 percent of their drop-backs.

The Pats knocked Panthers starter Cam Newton out of the game after pressuring him on five of his eight drop-backs resulting in two sacks of the former MVP.

I’m going to write an extensive film review of the Patriots’ third-down pressure calls, but here’s my favorite on Michael Bennett’s sack:

On the play, the Patriots are in their “playground” defense with several players roaming around the box. The Patriots show cover-0 with no deep safety in the middle of the field pre-snap and then morph into a split safety coverage after the snap. They only rush four, but still, get a one-on-one for Bennett against the center. Bennett uses a bull rush then pulls the center forward with a snatch move and finishes with an arm over to complete the sack.

Although rookie Chase Winovich didn’t record a pressure, you can see his impact as he draws two blockers on Bennett’s sack. He also won a few other reps with speed to power.

Winovich, like Meyers, wasn’t as dominant in his 11 snaps against the Panthers’ ones but it was his first taste of starter-level competition.

The Patriots run defense was also spectacular holding the Panthers to three yards per rush on 17 carries.

My breakdown of New England’s pressure schemes will expand on a terrific performance by the Patriots’ front seven.

In the secondary, the starting unit held up its end of the bargain with tremendous team defense as well.

The Patriots’ top defensive backs were perfectly in-sync most of the night as they rotated through most of their basic coverage structures in a dominant performance.

Let’s start with a coverage sack of Newton in the first quarter eventually made by Adam Butler.

The Panthers motioned into a stack alignment in a condensed formation to Newton’s right with a two-receiver look on the front side to his left. Starting on the right, Stephon Gilmore had Jarius Wright strapped in man coverage on a shallow crosser while Devin McCourty and Duron Harmon bracketed tight end Greg Olsen. On the left side, JC Jackson and Jon Jones had tight man-to-man coverage on Newton’s primary targets. The Panthers QB had nowhere to go with the ball and eventually ran himself into a sack.

Later on, Patriots safety Duron Harmon made an excellent open-field tackle on top receiver D.J. Moore on third down.

Carolina ran a mesh concept with Moore and Olsen crossing over the middle. The idea with this design is to pick the man-to-man defenders, thus creating separation. However, the Patriots diagnose the mesh and pass off Moore in coverage. Harmon cuts Moore’s crossing route while slot corner Jon Jones replaces Harmon as the ‘rat’ zone defender. Newton dumps it off to his wideout, and Harmon makes a great open-field tackle short of the sticks.

The Patriots held the Panthers to 90 passing yards on 4.5 yards per attempt thanks to excellent team defense.