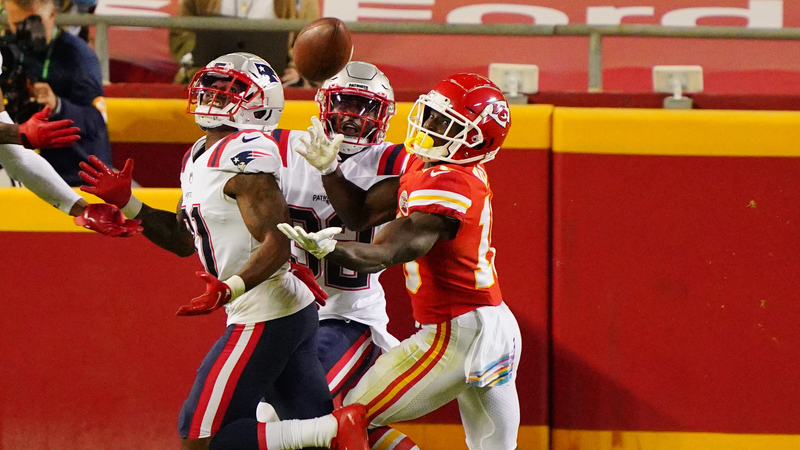 Below are a variety of advanced stats from the Patriots’ 26-10 loss to the Chiefs in Week 4.

Both Patriots quarterbacks, Brian Hoyer and Jarrett Stidham, had rough days in a game where New England desperately needed its signal-callers to protect the football.

The Pats quarterbacks get a break given the circumstances; starter Cam Newton practiced with the first-team offense all week, and New England’s backups had little time to prepare for Monday night’s game.

Still, the Pats QBs combined to lose -15.4 expected points based on the EPA formula, and both struggled with downfield accuracy.

Hoyer completed -1.3 passes below expectation, and Stidham’s number was far worse, with an expected completion percentage of 61.1 and an actual completion rate of 38.5 (-22.6).

On Hoyer’s interception, the Patriots tried to influence the Chiefs linebackers to play the run with a power play-action fake. KC linebacker Anthony Hitchens makes a nice recovery to fall underneath tight end Ryan Izzo’s route, forcing Hoyer to fit the ball into a tight window between the linebacker and deep safety. Hoyer doesn’t have the arm strength or ball placement to make that pass, and the ball sails into the hands of safety Juan Thornhill. Bad decision based on the coverage and Hoyer’s limited arm talent.

On the strip-sack, the Chiefs were able to bracket Julian Edelman in the middle of the field in man coverage with the post-safety providing inside help. Hoyer stayed on Edelman for too long, and by the time he started cycling through his reads, all the other routes were covered.

The veteran led the Patriots on four drives inside the Kansas City 25-yard line and even made some downfield throws averaging 8.1 air yards per attempt, but the mistakes were killers.

As for Stidham, his downfield accuracy was actually spottier based on the metrics. Although Edelman takes the blame for his first pick, the second one was another poor throw.

Stidham was half a beat late to seeing Damiere Byrd winning inside on a post route with the safety stuck in the middle of the field, and then short-armed the throw to give Rashad Fenton a chance to undercut the pass.

The second-year quarterback made an excellent touch throw to N’Keal Harry in the back of the end zone, and gave the Pats a spark when he came off the bench, but was once again inconsistent.

We’ll have more film review on the Patriots quarterbacks after reviewing the coaches film.

The Patriots offensive line still had a productive day despite being down two starters at center (David Andrews) and right guard (Shaq Mason).

The two New England quarterbacks were only under pressure on 31 percent of their 42 drop-backs, and the Pats averaged 5.3 yards per rush with backups in multiple spots.

#Patriots film: Pats left tackle Isaiah Wynn running the arc with Frank Clark. Great depth out of his stance to cut off the angle. Smooth lateral slides to run Clark past the QB. Wynn allowed two pressures on 42 pass-blocking reps mostly going up against Clark. pic.twitter.com/xZUjxKNtdj

In pass protection, the Patriots got a solid effort from rookie Michael Onwenu (zero QB pressures) and left tackle Isaiah Wynn, who went up against Chiefs top pass-rusher Frank Clark most of the night. On the play above, Wynn gets excellent depth out of his stance to cut off the angle and runs the arc with Clark to push him past Hoyer.

Along with excellent pass protection, Onwenu was superb as a run-blocker making several thunderous blocks at the point of attack to open rushing lanes for the Pats running backs.

Here, Onwenu pulls on a power scheme popping Chiefs linebacker Damien Wilson before finishing him with accidental help from Izzo to create a crease for Rex Burkhead.

As we’ve said every week, the Patriots found something with Onwenu in the sixth round.

Patriots wide receiver Julian Edelman has a league-high five drops after having the second-most drops in the NFL last season with ten.

Edelman’s latest drop that resulted in a pick-six was a minus-eight in the expected points added metric, the game’s biggest swing after it fell into Tyrann Mathieu’s lap.

As frustrating as the drops are, Edelman is still New England’s best route runner against man or zone coverage, as he displayed at times on Monday night. Above, he shows excellent tempo in his route to sell his block on the fake screen before releasing upfield for a 19-yard gain.

Edelman also made two grabs on third and fourth down on option-style routes against the defensive backs leverage.

Patriots fans are understandably frustrated with Edelman’s lack of focus as the drops pile up, but he’s still a dynamic receiver who will help this team in the long run.

The Patriots defense held the Chiefs offense to their second-lowest point total of the Patrick Mahomes era, and Mahomes himself had his second-lowest PFF grade in his career (44.9).

Bill Belichick’s plan was to play the game mostly in dime or dollar (seven DBs) packages while committing four or fewer defenders to the pass rush on 33 of Mahomes’s 36 drop-backs.

The Patriots rushed only three defenders at Mahomes on 17 of his 36 drop-backs, opting to play eight defenders in coverage in passing situations on second and third down.

New England managed to pressure Mahomes on 31 percent of his drop-backs despite the lack of blitzing and held Kansas City’s rushing attack in-check with defensive backs on the field.

In the pass rush, Chase Winovich once again led the way with a sack and two hurries combining with John Simon and Deatrich Wise to pressure Mahomes.

On his sack, which should’ve been an interception, Winovich beat Chiefs left tackle Eric Fisher with a rip move after setting Fisher up with a speed rush. Winovich fires off the ball into Fisher’s chest, and when Fisher goes to engage with his hands, Wino rips through his punch attempt to keep himself clean and turn the corner.

Winovich is turning into a one-man wrecking crew ranking second in pass-rush win rate and 14th in total quarterback pressures through the first four weeks of the season (15).

New England’s run defense also had a bounce-back performance, slowing down Clyde Edwards-Helaire despite playing the game out of sub-packages.

The Patriots held up in run defense thanks to great play from Lawrence Guy, Ja’Whaun Bentley, Wise, and Simon, as that group combined to make 12 run stops in the game.

Over the right side of the OL. Shuts down two outside zone plays with great pad level, hand power, shed technique. Using his length. Good edge sets by Simon too. pic.twitter.com/GaPZQSLITs

Wise has made significant improvements to his technique as a run defender, playing with excellent pad level, punch timing and hand strength, and awareness to shed blocks and find the ball carrier.

Patriots All-Decade team honoree Lawrence Guy led the team with a 74.9 run defense grade, taking on double-teams and defeating single blocks as the anchor in the middle of the defense.

If the Pats can get that kind of effort out of their front, especially given the lack of resources in the game plan, the defense will continue its ascension towards the top of the league.

The Patriots secondary played a nearly flawless game sans two dropped interceptions against the Chiefs, thanks to excellent communication and talent in the backend.

New England had extra bodies in coverage to track Kansas City’s skill players and focused on avoiding foot races as much as possible with the speedy Chiefs receivers.

The Patriots cycled through their cover-one man, cover-three match, cover-two, and man-match coverages to limit big plays through the air based on the television copy.

Going through the 3rd down passes vs. the NE defense.

See this as Cover 1 “Double Lurk” — with re-routes on Kelce & the RB (bottom of the screen). @NFLMatchup pic.twitter.com/a8MuyiMYHt

Here, the Patriots are playing a down in their cover-one double robber structure. As the safeties pop out of the rush, they become “robbers” reading the quarterback’s eyes to jump Mahomes’s intermediate options. Shilique Calhoun also levels Travis Kelce as he gets into his route as a low hole defender. The Chiefs are running two verticals with post-safety help, allowing the corners to play off Devin McCourty’s help in the middle of the field. Jon Jones is stride for stride with Tyreek Hill, and Mahomes’s pass attempt falls incomplete.

Along with robber coverages, the Patriots also deployed man-match principles to pass off deep crossing patterns and vertical route combinations.

On this second-down stop, JC Jackson passes off Mecole Hardman to Devin McCourty and then replaces McCourty in his deep zone to become Stephon Gilmore’s help on Hill. The perfect execution forces Mahomes to hold the ball, and eventually, Bentley breaks up a pass attempt.

Lastly, as a perfect example of leveraging routes, the Patriots passed off running back releases from the backfield with excellent communication between the inside backers and edge defenders.

Here, the initial call puts Jason McCourty in man coverage on the back. But when the back motions towards the flat, McCourty passes him off to Adrian Phillips, who is better positioned to defend the route. McCourty replaces Phillips in the rush to get heat on Mahomes, and the Chiefs QB is forced to throw a jump-ball to Sammy Watkins into tight coverage by Gilmore.

New England’s focus was on leveraging routes, meaning the Chiefs receivers were running into defenders rather than the Patriots’ defensive backs chasing them.

The Patriots were on one string in the backend with excellent communication and execution of the game plan, which led to Mahomes having a rare off-day on Monday night.

In this week’s film review, we’ll go into further detail on how Belichick evolves each time he plays Mahomes to give the reigning Super Bowl MVP a new puzzle to solve each time they play.