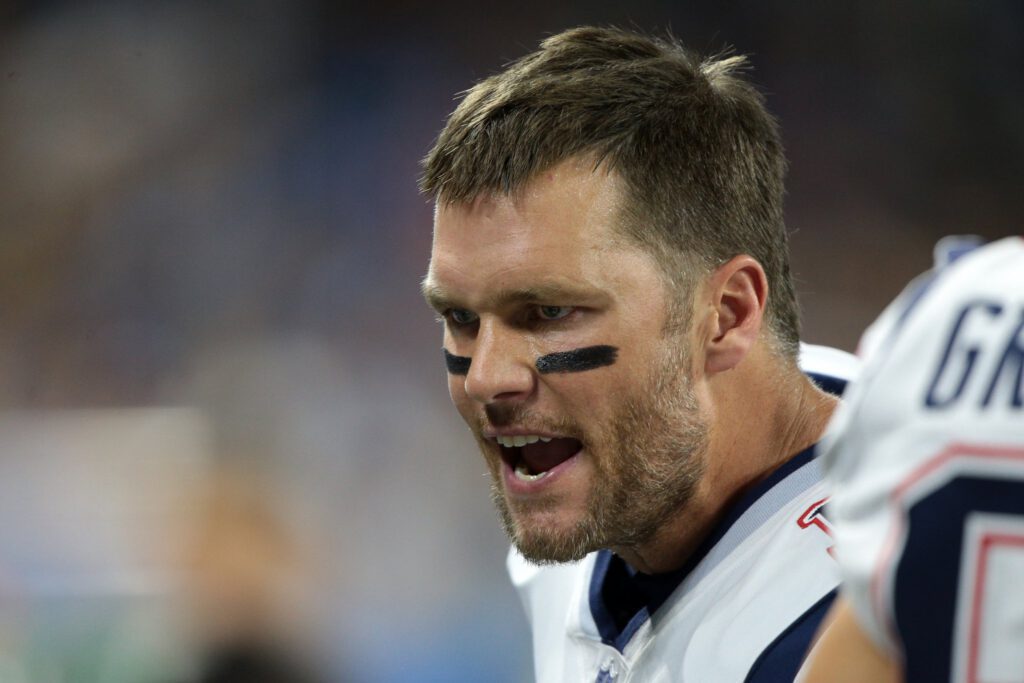 Below are a variety of advanced stats from the Patriots’ 26-10 loss to the Lions on Sunday night.

The lack of playmakers at Tom Brady’s disposal has started to have a negative impact on three-time MVP.

The Patriots struggled to create separation on the outside over the last few weeks, and as a result, Brady only completed three passes outside the numbers beyond the line of scrimmage against Detroit.

For the second straight week, Brady also failed to complete a pass of 20 or more air yards, as he is now 0-7 on deep pass attempts with an interception in the Patriots’ last two games.

Overall, Brady is only 3-13 for 83 yards, zero touchdowns, one interception and a 21.6 passer rating on deep pass attempts.

In other words, the Patriots quarterback would have a higher passer rating if he spiked the ball into the ground 13 times than he does on deep passes this season.

Brady has also uncharacteristically struggled when facing pressure, an area he typically is among the league’s best.

Through three games, Brady is only completing 36.8 percent of his passes thrown under pressure, as the lack of separation from his receivers gives him little options to get rid of the football when the protection breaks down.

In the time to throw department, Brady held onto the football a little longer in Detroit than past weeks, clocking in at 2.63 seconds. In the first two weeks, that number was a blistering 2.32 seconds.

Brady had more time to scan the field for open receivers against a weak Lions pass rush, but again, there weren’t any open receivers to be found outside of tight end Rob Gronkowksi.

After two difficult matchups to start the season, the Patriots’ offensive line had a bit of a repreve against a Lions pass rush missing its top weapon in Ziggy Ansah.

As a result, Brady was only pressured due to breakdowns by the offensive line on six of his 28 dropbacks (23 percent), and he even had some extra time to throw on many occasions.

Most of the Patriots offensive line had a solid day in pass protection, although they all left something to be desired in the run game. But left tackle Trent Brown continues to be inconsistent.

Brown has long stretches where his technique and ability to stay in front of the man across from him are terrific, but the lapses have led to sacks and quarterback hits on Brady.

The one area that I continue to see Brown struggle in pass protection is with inside speed rushes.

On the sack he allowed on Sunday night, you’ll see Brown overcommit to the outside rush with all of his momentum going toward his own end zone. That’s going to allow Lions edge rusher, Eli Harold, to use Brown’s momentum against him, as he spins inside and comes through with a sturdy rip and wrap move to get Brown off-balance. In his initial set, all Brown has to do here is maintain his leverage and push Harold by quarterback Tom Brady. He gets caught too far upfield, and it’s an easy sack.

The slot performance section is included every week solely because it’s such a significant aspect of what makes the Patriots offense go.

And so far this season, the Patriots haven’t gotten the necessary production out of their slot receivers for the offense to take flight.

Once again, wide receiver Chris Hogan ran the vast majority of his snaps out of the slot and struggled to create consistent separation for the Patriots.

Luckily for the Patriots, Edelman will return in Week 5, and they desperately need him to bring the slot production with him.

As you’d expect, the Patriots pass rush was nonexistent on Sunday night as the team has struggled mightily in this depart since Trey Flowers suffered a concussion last week in Jacksonville.

In all, the interior players on the Patriots D-Line managed two pressures on the night, both hurries by Adam Butler.

That includes Malcom Brown, Danny Shelton, and Lawrence Guy, who all had rough games both rushing the passer and defending the run.

Until the Patriots find an interior pass rush, quarterbacks will continue to have room to maneuver in the pocket and set their feet on their throws, and every quarterback at any level sees a dramatic increase in accuracy when they’re able to set their feet properly.

Free-agent acquisition Adrian Clayborn also had his worst game of the season last night, failing to tally a single pressure on Stafford.

Patriots defensive line coach Brandon Daly said that the biggest issue with Clayborn has been a lack of consistency, “there’s some things that he needs to improve on and a level of consistency, I would say, that we need to gain there, but he’s certainly not the only person in that category,” Daly said.

The Patriots need Clayborn to be a bigger factor if the pass rush is going to find its stride.

In the run game, the stats don’t tell the story at all of what happened on Sunday night.

The Patriots’ defensive front got pushed around, bullied, by a Lions offensive line that hadn’t paved the way for a 100-yard rusher in 70 games until last night.

Detroit under offensive coordinator Jim Bob Cooter has been a power running team, and they dominated the point of attack led by rookie left guard Frank Ragnow and left tackle Taylor Decker.

I also asked Daly where the Patriots could improve to do a better job of getting off blocks, and he gave an answer that makes a lot of sense saying, “one of the things is just creating separation extension and using our hands a little bit better I think would go a long way for us right now.”

As you can see on this run here, where the Patriots’ front was blown off the line of scrimmage, there’s minimal hand fighting or arm extension to get off blocks and gain leverage on the play.

That’s an area the Patriots will have to improve in if they want their run defense to improve.

The Patriots pass defense did a decent job of limiting the big plays from quarterback Matthew Stafford, and an explosive group of Lions pass catchers.

The coverage broke down on Marvin Jones’ back-breaking 33-yard touchdown catch, but other than that, the Patriots only allowed two other passing plays of 20-plus yards, a decent job against a very explosive team.

The Patriots’ strategy in the secondary was to back off the Lions wideouts, forcing Stafford to dink and dunk his way down the field.

And to Stafford’s credit, he took what the defense gave him and settled on averaging a modest 7.3 yards per attempt.

However, the one area that the Patriots struggled in far too often on Sunday night was rallying to the football once Stafford succumbed to the checkdown.

Although it was an improvement from last week, the Patriots still allowed 145 yards after the catch to the Lions, and as you can see on the play above, the speed and willingness to converge on ball carriers wasn’t where it needs to be defensively. Marvin Jones gains 11 yards after the catch on this play on a pass where he should’ve been stopped short of the first down.

Head coach Bill Belichick said of the defenses energy level, “I think the effort and the energy are good. We’re just not having a lot of success in any area, and I think as soon as we start having some you’ll see a difference, but it’s hard to have it when you’re not making enough plays.”

Belichick admits in that quote that the Patriots defense is demoralized. They aren’t making enough impact plays to boost their energy level, and as a result, they’re giving up easy yards.