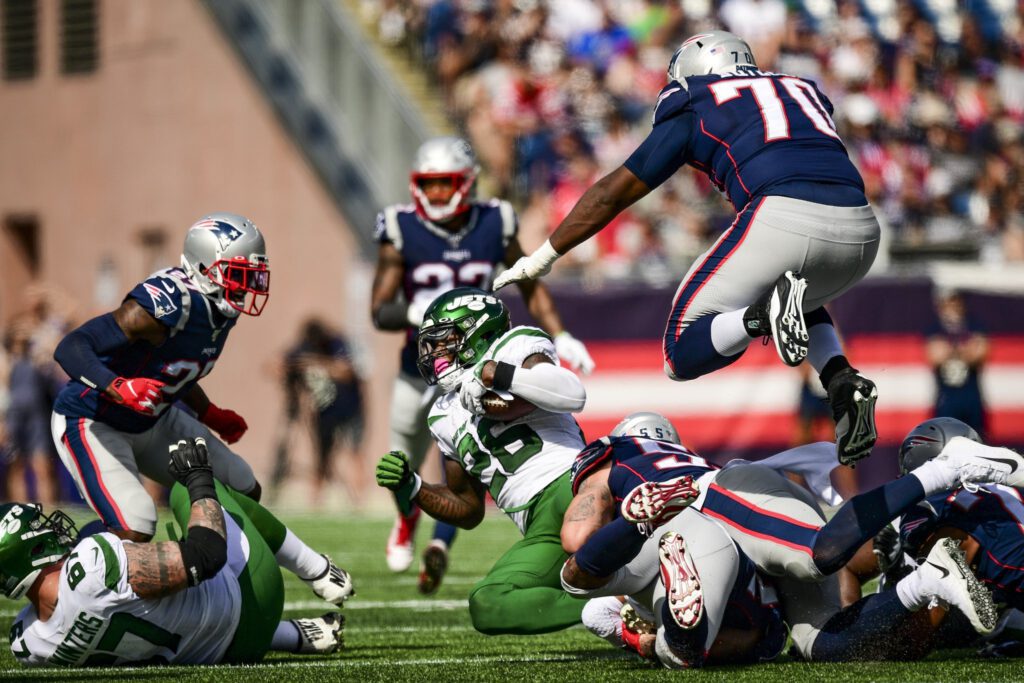 Below are a variety of advanced stats from the Patriots 30-14 win over the Jets on Sunday.

The six-time Super Bowl champ is off to a great start delivering another workmanlike performance against an AFC East foe in Week 3.

Brady’s 81.6 adjusted completion percentage on Sunday was his best so far this season, a statistic that removes drops by receivers from the equation for the quarterback.

Along with a high completion rate, Brady was excellent on throws from a clean pocket completing 74.3 percent with an 8.7 yards per attempt average and a 90.5 PFF grade.

And he completed six-of-12 throws for 124 yards (10.2 YPA) and a touchdown on passes of ten or more yards down the field.

Brady’s longest completion in terms of air yards was on the play of the game offensively, a 28-yard acrobatic catch by Josh Gordon. On third and 22, Gordon is the furthest receiver out to Brady’s left in a reduced split (inside the numbers). The Jets appear to be in a two-high coverage structure in a variation of a cover-2 zone. Gordon runs an out and up down the sideline selling a square out pattern before breaking up the boundary. In zone, the Jets defenders are staring at the quarterback as they drop, so their backs are to Gordon. He sneaks behind the coverage and Brady puts the ball on the top shelf where only Gordon can reach it for the completion. Two great players making a fantastic play.

In the time to throw department, Brady clocked in at an insane 2.18 seconds on average, by far his fastest release of the season. Brady’s average of 2.27 seconds ranks third among quarterbacks through three weeks (min. ten drop-backs).

Despite 15 blitzes by the Jets defense, Brady was only under pressure on seven of his 42 drop-backs or 16.7 percent of his throws.

In back-to-back weeks, the Pats offensive line kept Brady relatively clean. Some of that has to do with his quick release, but the guys up front deserve credit as well.

The Patriots got much better efforts from their starting tackles with Marcus Cannon returning and veteran Marshall Newhouse holding his own in pass protection.

Newhouse received a team-best 86.6 pass-blocking grade against the Jets, and Cannon was New England’s top-graded player overall on offense (83.5).

Although Newhouse played well, there’s still room for improvement as is the case for every player. The one nitpick is that his feet can sometimes stall as he mirrors edge rushers.

On Brady’s touchdown pass to Julian Edelman, Newhouse’s initial kick slide is fine, but he gets beat around the corner because he stops moving his feet. He tries to land another punch but finds himself lunging forward in his pass set because his feet don’t come with his hands, and Brady ends up taking a shot as he releases the ball.

With that said, if the Patriots can get these kinds of performances out of Newhouse, they’ll take it.

And overall, the Patriots rank seventh in PFF’s pass-blocking efficiency metric through Week 3.

Out of Brady’s 306 passing yards, 189 of them were on throws to receivers working out of the slot, targeting six different players from a slot alignment.

This season, the Patriots are using Phillip Dorsett in the slot on 47.8 percent of his pass routes which is a significant increase from his first two seasons in New England (28 percent).

Often labeled a speed receiver, Dorsett is blossoming into an all-around receiver that can run routes inside and outside as well as at all three levels of the defense.

On 15 targets this season, 12 of those were on throws within 20 yards of the line of scrimmage, and only two of Brady’s attempts to Dorsett were of the deep ball variety (20-plus yards).

Dorsett’s touchdown catch and run was a perfect example of how he has become more of an intermediate threat in his third season with the Patriots.

On the play, the Patriots ran play-action with Dorsett working out of the slot on a crossing pattern. The Jets linebackers bite hard on the fake by Brady, leaving Dorsett wide open behind them for a walk-in touchdown.

Dorsett’s development into a complete receiver that can play multiple roles and run routes from various alignments is massive for the Patriots offense moving forward.

The Patriots got after Jets quarterback Luke Falk on 42.9 percent of his drop-backs, and over the last two weeks, their defensive pressure rate is an outstanding 45.8.

The Jets and Dolphins’ offensive lines were vulnerable, and with a young quarterback starting for New York as well, the Patriots took full advantage on Sunday afternoon.

The Patriots started the onslaught on Falk with an overload blitz in the first quarter. Bill Belichick knew that the young Falk wouldn’t know how to set protections to keep himself clean, so they came after him.

On Jamie Collins’s first sack, the Patriots put Danny Shelton at nose tackle and three linebackers over the left side of the offensive line. Falk doesn’t see the blitz coming and sends the running back downfield on a route instead of leaving him in to block. Without the back in blitz pickup, the Patriots are sending three defenders against only two blockers, and Collins storms in untouched for the sack.

Along with Collins’s great day, fellow hybrid linebacker Kyle Van Noy had himself a game with a team-high five quarterback disruptions and two run stops.

On Van Noy’s sack, the Patriots ran a stunt with KVN and Adam Butler on third down in the middle of the defense. Butler’s job is to penetrate and occupy the defenders so that Van Noy can wrap around him like a basketball player coming off a pick. The Jets fail to pass it off, and Van Noy meets Chase Winovich at Falk for another sack.

In run defense, the Patriots had an excellent plan and fantastic execution holding Le’ Veon Bell to 35 rushing yards on 18 carries (1.9 average).

The plan called for Danny Shelton, Lawrence Guy and the big guys up front to occupy the Jets offensive line so that the linebackers could stay clean and flow to the ball.

Bell is an extremely patient and shifty runner with terrific vision, so the defense had to wait him out and force him to make the first move.

Here’s a great example of terrific team defense. The Jets run a split-zone action with the tight end blocking across the formation. Shelton and Guy plug up the A-gaps, and you can see Elandon Roberts scraping at the second level. With the guys up front holding up blocks, Roberts doesn’t have anyone blocking him, so he’s free to pounce on Bell when the Pro Bowler commits to a gap.

Patriots head coach Bill Belichick preached all week that it would take all 11 defenders to shut down Bell, and the Patriots listened to their coach on Sunday.

When the highest total of receiving yards that any of your defensive players allowed was 23 yards, you know you had a good day in pass defense.

The Jets receivers had no chance against the New England secondary with Stephon Gilmore erasing top wideout Robby Anderson and the others falling into place behind the All-Pro.

Dating back to last season with Gilmore shadowing him, Anderson has managed only 22 yards on four catches despite being targeted 13 times with Gilmore in coverage.

Along with Gilmore, the Patriots got great coverage from the rest of the secondary as well from Jason McCourty to Jonathan Jones to Duron Harmon and Devin McCourty.

On Duron Harmon’s pass breakup, the Pats safety made a great break on the ball to prevent a would-be completion. The Patriots are in a cover-3 structure and Jets wideout Jamison Crowder runs a dig route behind play-action with the middle of the field vacated by the linebackers. Harmon comes crashing down from his deep safety position and separates Crowder from the ball.

This season, opposing quarterbacks are only completing 52.8 percent of their throws with a 44.5 passer rating against the Patriots defense, both marks lead the NFL.