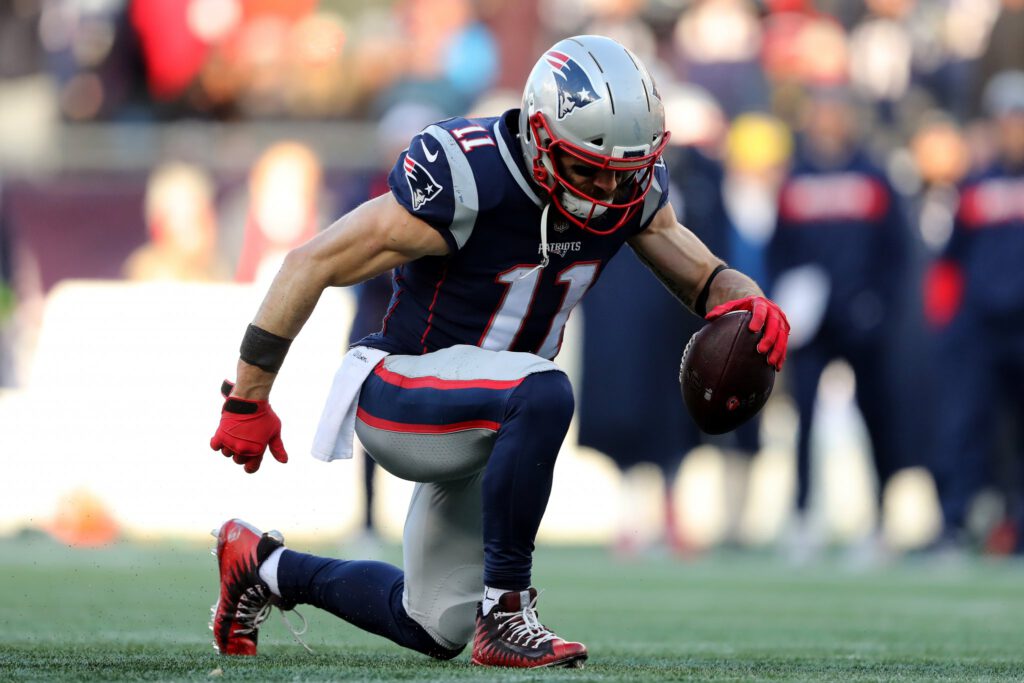 Below are a variety of advanced stats from the Patriots’ 41-28 win over the Chargers in the Divisional Round:

Although Brady will receive criticism for this, the key to the Patriots’ offenses success against a stingy Los Angeles defense was controlling the Chargers’ pass rush, and Brady played a significant role in doing so.

To make things easier on his line, Brady got rid of the ball in 2.13 seconds on average, his fastest release of the season, while still throwing for over 340 yards on 7.8 yards per attempt.

Along with the quick release, Brady’s 4.3 air yards per attempt and 35 passes within ten yards of the line of scrimmage erased Pro Bowlers Joey Bosa and Melvin Ingram from the game.

And when he had to, the 41-year-old reminded us all why he’s the best.

On his longest throw of the day, Brady threw an absolute missile into tight coverage to Julian Edelman for a 35-yard catch. Edelman ran a nifty double-move with a stutter at the top of the route to sell a comeback or out and then as soon as the defender bit he got vertical down the seam. Brady threw the ball on a line to beat the defender to the spot and lead Edelman perfectly into yards after the catch.

The Patriots and Brady were also excellent on play-action passes averaging 11.0 yards per attempt on those plays.

On another long completion to Edelman, the Patriots’ offensive line does a terrific job of simulating a “wham” run blocking scheme that fools the Chargers defense. Both Marcus Cannon and David Andrews jump out to the second level with Gronk “whamming” at the line of scrimmage to make this look like a running play. Brady keeps the ball and lofts a perfect pass over the second level defenders in-stride to Edelman.

Lastly, this was an easy throw to Brady on Gronk’s lone catch of the day, but notice how the Pats quarterback stands in the pocket with pressure bearing down on him to deliver the throw. A good sign based on some of the things we saw this season from the GOAT.

Brady and the game plan made things easier, but the offensive line deserves an enormous amount of credit for keeping the Pats quarterback clean against an excellent pass rush.

The Chargers moved both Bosa and Ingram around as they each took snaps rushing from the left and right side, but only managed a combined five quarterback pressures and one hit on Brady (Ingram).

The Patriots bullied the two Pro Bowlers with tackles Trent Brown and Marcus Cannon winning the matchup easily allowing a combined two quarterback pressures that were both hurries.

It will be easier to break down how exactly the Patriots shut down one of the best pass-rush tandems in the NFL on the coaches film, but here’s Trent Brown on his approach:

“Playing my game. What I do every week. Week in and week out. Day in and day out. As long as I do that, I ain’t worried about nobody.”

In the running game, the Patriots’ offensive line was also stellar as they continue to amaze me with their diversity and ability to run both gap and zone blocking schemes.

For more on that, check out my ten things from after the game on Sunday.

As you’d expect, Edelman was a monster in the slot hauling in nearly 88 percent of his targets and accumulating a ridiculous 4.37 yards per route run.

Like Brady and Gronk, Edelman’s doubters were vocal saying that he has lost a step this season, but those criticisms were wildly overblown.

Edelman continues to be the Patriots’ most reliable pass catcher and beat both man and zone coverage easily against the Chargers.

Along with Edelman, Pats wideout Phillip Dorsett made his presence felt in the slot with a 15-yard touchdown reception to put the Patriots up 21-7. Here’s Dorsett on the play:

“Me and Jules were in the stack, and we were talking about it the whole week, we knew that they might mess it up. Once they hesitated, I just took it, and I knew the ball was coming because I knew Tom was going to see me.”

The Patriots defense put together a dominant performance through three quarters before surrendering some garbage time points late in the game on Sunday, and it all started up front.

The Patriots’ pass rush pressured Chargers quarterback Philip Rivers on 45.3 percent of his drop-backs taking advantage of a weak offensive line and frustrating the heck out of Rivers.

Patriots defensive end Trey Flowers said after the game, “we understood that we had to get him off his spot; not allow him to be comfortable in the pocket, not allow him to step up because he’s [Rivers] a great quarterback. So we had to pressure him.”

Along with Flowers, leading the way for the Patriots in that effort to pressure Rivers was linebacker Dont’a Hightower who had a career-high eight quarterback pressures.

Hightower’s success was due to a combination of his brute force on bull rushes that neither Chargers tackle could handle, and scheme aided rushes on stunts or games.

The Patriots went to a number of different stunt designs to pressure Rivers and confuse the Chargers’ offensive line, and Hightower was often used as the wrap player on those actions.

Here, Hightower starts in a two-point stance and wraps around the inside rush from Kyle Van Noy. The left side of the offensive line failed to pass off the stunt and Hightower came through the middle to force Rivers into a throw well short of the sticks on third down that fell incomplete.

Back to Flowers now, who contributed five quarterback pressures in another stellar performance.

On this play, the Pats defensive end goes to a long arm technique to get underneath right tackle Sam Tevi and drops him into the ground before landing the quarterback hit on Rivers.

Flowers would add a sack as well on a similar stunt as the Hightower play above, but that long arm was lethal for him all day long.

Along with the pass rush, the Patriots emphasized stopping the run and limiting Chargers running backs Melvin Gordon and Austin Ekeler on Sunday.

“Yeah, we talked about that. Coming in and stopping the run and not letting them get really whatever they want,” said safety Devin McCourty. “I think you go against quarterbacks like that and they know if they can get the ball going in the run game, they’ll run and run and then now you’ve got to deal with hard play-action. Just everything opens up. The guys up front did a great job of not letting the run game get going and then it allowed us to do all of the different things we do in the passing game on the front and in the back end.”

The Pats defense held the duo to 49 yards from scrimmage on 14 touches, and the Chargers managed only 1.9 yards per rush as a team.

The New England defense was terrific in the running game, creating penetration and staying disciplined in their gap assignments to make the Chargers one dimensional.

In the secondary, the Patriots and Stephon Gilmore righted the ship after a shaky first drive to shut down the Chargers receivers when the score was close.

After allowing a 43-yard touchdown to Keenan Allen, Rivers was 0-5 with an interception and a 0.0 passer rating targeting Gilmore the rest of the way.

Gilmore said his strategy against Allen was to beat him up in his route stem to prevent the Pro Bowl wideout from releasing downfield.

Based on film study, Gilmore realized that Allen was at his best at the top of routes, so he did his best to make sure Allen couldn’t get downfield to make a move out of his break.

On Gilmore’s interception, his mirroring skills out of press man coverage were on full display as he runs a better corner route than Allen essentially becoming the intended receiver on the play.

Along with Gilmore, rookie JC Jackson held his own against Chargers wide receiver Mike Williams.

Jackson allowed a team-high 67 yards into his coverage, but it took 12 targets to get their, as opposing quarterbacks keep testing Jackson just to have passes fall incomplete.

Here, Jackson, who told me he looks at himself as a press-man corner, is all over Williams at the line of scrimmage disrupting his release and crowding Williams down the field. Then, he makes a great play on the ball to dive in front of Williams when the ball arrives to break up the pass.

All season long, the Patriots have gotten tremendous play from their cornerbacks.