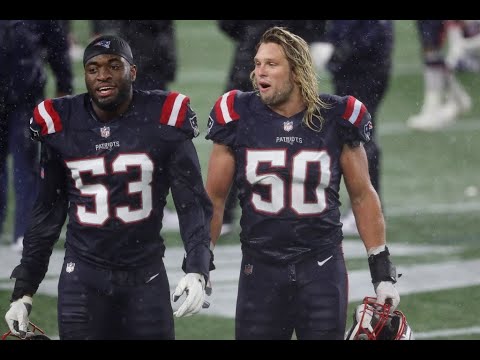 Below are a variety of advanced stats from the Patriots’ 23-17 win over the Ravens in Week 10.

Patriots quarterback Cam Newton only threw the ball 17 times against Baltimore, but he has been one of the most accurate downfield passers in the league over the last two weeks.

Newton leads all quarterbacks in completion percentage over expected (CPOE) in his last two games and is fifth in EPA per play, making him one of the NFL’s most efficient passers of late.

After a long layoff due to COVID-19, the former MVP’s throwing mechanics and decision making are rounding into form once again.

Plus, offensive coordinator Josh McDaniels is simplifying things a bit for Newton as well, which is reflected in Newton’s average time to throw of 2.59 seconds on Sunday night.

The emergence of Jakobi Meyers has also helped Newton significantly, as the two are clicking at a high level. Above, the Pats use the same strategy that led to a big play against the Jets. Defenses are playing post-safety or single-high coverages against New England, with no fear of a deep threat. McDaniels is attacking post-safety coverage by sending Meyers on “burst” corner routes. He sells the crosser and then breaks on the corner pattern into the vacated sideline, keeping the deep safety away from the play, and Newton is throwing in rhythm.

Newton is also making faster decisions with the ball to get to his check downs. Here, Matthew Judon flushes Newton out of the pocket, and Cam finds a high-low concept with Meyers crossing and fullback Jakob Johnson releasing in the flat. On that side of the field, the linebacker falls underneath Meyers’s route, so Cam alertly takes the shorter throw.

Although the Pats quarterback didn’t have as much on his plate this week, he has delivered back-to-back winning performances with turnover-free football and excellent game-plan execution.

The Pats offensive line deserves all the praise it’s getting for their play on Sunday night, both in pass protection and as run blockers.

In pass protection, Newton was under pressure on 33.3 percent of his drop-backs despite Baltimore blitzing Cam on 14 of his 18 passing plays.

Leading the way were clean sheets from right guard Shaq Mason and center David Andrews, as keeping Newton clean up the middle has allowed the Pats QB to step into more throws lately.

Although it was the only pressure he allowed, rookie right tackle Michael Onwenu surrendered just his second sack of the season to Ravens edge rusher Matthew Judon.

On the rep, Onwenu has a slight false step with his outside foot, where he brings his right foot forward initially instead of stepping back at an angle. Onwenu’s poor footwork in his pass set allowed Judon to turn the corner.

The Pats rookie told CLNS Media on Monday that he knew his mistake on the sack, corrected it, and pitched a shutout the rest of the way.

The Patriots also got a terrific performance out of the offensive line in the running game, where they were expertly blocking counter traps and lead ISO plays all night long.

Here’s a trap or counter run to Damien Harris that goes for a first down. In the play, the left side of the Pats offensive line delivers a terrific double-team while Shaq Mason kicks out the edge defender and Johnson leads through the hole, an easy jog in the park for Harris.

New England’s offensive line continues to set the tone for the rest of the team.

Patriots second-year running back Damien Harris’s emergence is adding quite a bit of punch to New England’s rushing attack.

Most analytics say that running backs are interchangeable, giving credit for success to the blocking, but Harris is adding 1.07 yards over expected, sixth-best in the NFL, per NextGen.

Here’s a great example of Harris creating yards on his own beyond what’s blocked. The Pats are blocking fullback lead ISO. Onwenu, at right tackle, whiffs on his base block on the line of scrimmage, preventing Johnson from reaching the second level. Once he’s through the line with no lead blocker, Harris lowers his pads and drives three Ravens forward for a first-down run.

The Alabama product isn’t overly elusive in the Barry Sanders sense, but he has excellent contact balance and power to run through contact.

In this play, Harris manipulates the second level of the defense by following behind Johnson then cuts it back inside to the open gap. Harris runs through one arm tackle and makes the safety miss, taking three Ravens once again to bring him down after he accumulates 25 yards.

New England would be a good rushing attack regardless of who is running the ball, but Harris is turning them into an elite rush offense.

The Patriots continue to get excellent play from second-year wide receiver Jakobi Meyers, who averaged 3.06 yards of separation on his seven targets against the Ravens secondary.

Although separation metrics are far from perfect, the league average is 2.86 yards of separation, so Meyers is considered an above-average separator by those standards.

Here, Meyers runs a “burst” corner route straight out of the Julian Edelman route tree. Meyers sells an inside break or crosser with his release, getting Ravens corner Marcus Peters to turn his hips inside. Once Peters bites on the release, Meyers re-stems vertically to get into Peters’s blindspot and then gains ground out of his break to run away from the Pro Bowl corner.

After shredding the Jets for 169 yards last week, Meyers had more to prove this week against a much better secondary in Baltimore, and he led the team with five catches for 59 yards.

New England has a player in Meyers, who can take over a slot and possession receiver from Edelman with hopefully a vertical playmaker taking coverage away next season.

The Patriots’ front seven had arguably its best performance of the season in Sunday night’s victory over the Ravens.

New England pressured Jackson on 35 percent of his drop-backs with only three blitzes and got terrific performances from Chase Winovich and John Simon on the edge.

Starting with Winovich, he had a career-high nine quarterback pressures and added two run stops with solid play both on and off the line.

Here, Wino drew a holding penalty on Ravens right tackle D.J. Fluker by hitting Fluker with an inside stutter move. The Pats edge rusher takes two hard strides off the line to get Fluker to set back for a speed rush and then uses a head fake to jump inside. Fluker has no choice but to hold him to avoid a sack.

Joining Winovich in the backfield a few times was fellow Michigan man Josh Uche. The Pats rookie finally saw some playing time, logging 21 snaps in the win, and made an impact.

On his sack, Uche uses a hesitation move to get Fluker to sit inside on an inside rush. Instead, Uche throttles down outside and uses a rip move as he turns the corner to soften the edge for a sack.

The Patriots are discovering a potentially potent pass-rushing duo with Winovich and Uche.

New England’s run defense, particularly on the edge, was as good as it’s been all season on Sunday night thanks to a much-needed shakeup in personnel and strategy.

The Patriots played most of the game with safeties Adrian Phillips ($ backer) and rookie Kyle Dugger (nickel) in the box to match speed on speed against Jackson.

On the second play from scrimmage, the Ravens try to toss the ball to the perimeter. Dugger blows up the lead-blocker, forcing Baltimore to run back Mark Ingram back inside, and newcomer Carl Davis collapses on the ball carrier.

#Patriots film: story of the game for the defense was better edge play + rallying to the ball.

Bill Belichick’s defense was rallying to the ball and setting hard edges with physical take-on’s against the Ravens’ lead blockers, which was the difference when Baltimore had the ball.

By adding more speed at the linebacker level, Belichick might’ve found a mix of players that can both physically and athletically hold up against offenses that want to run on the perimeter.

New England was the worst defense in the league by a mile at defending outside runs in the first nine weeks of the season, but hopefully, Sunday night was a turning point for this unit.

After reviewing the TV copy, there was both good and bad from the Pats pass defense.

On a positive note, New England’s outside cornerback duo of JC Jackson and Jason McCourty returned to form with Lamar only completing two of his seven attempts with an interception targeting the duo. Both Jackson and McCourty stayed over the top of several double moves by Ravens wide receiver Hollywood Brown and were in-phase for most of the night.

#Patriots film: Pats did a much better job of defending releases out of the backfield. Back to back plays here. First, Wino blows up Dobbins with Jennings behind him in man coverage on the RB forcing an incomplete pass. Second, Simon and Hall read the play design perfectly. pic.twitter.com/KWGMLOlMFH

Plus, the Patriots showed significant improvement on “slide” routes out of the backfield where the offense uses some misdirection to get a ball carrier in the flat with room to operate.

However, New England still struggled to defend the middle of the field, with Jackson throwing his second touchdown of the game between the numbers and dicing up Pats linebacker Terez Hall.

Hall plays with great effort and makes mistakes faster than starter Ja’Whaun Bentley, but he allowed a completion on all nine of his targets, surrendering 119 yards in coverage.

In this play, Hall gets caught spot-dropping in zone coverage with poor awareness of the receivers around him. In zone, it’s important to hit your landmarks and keep eyes on the quarterback, but you also have to know where the receivers are in their routes. Hall loses Willie Snead, and Jackson makes the throw.

Later on, Hall gets confused about the coverage call and thinks its zone coverage. However, it’s man, and he is responsible for running back Gus Edwards out of the backfield. Hall stays in the middle of the field, and Edwards is all alone in the flat for a 31-yard catch and run.

Hall’s sideline-to-sideline speed is an upgrade over Bentley. Still, he isn’t fixing New England’s issues in pass defense at the second level.