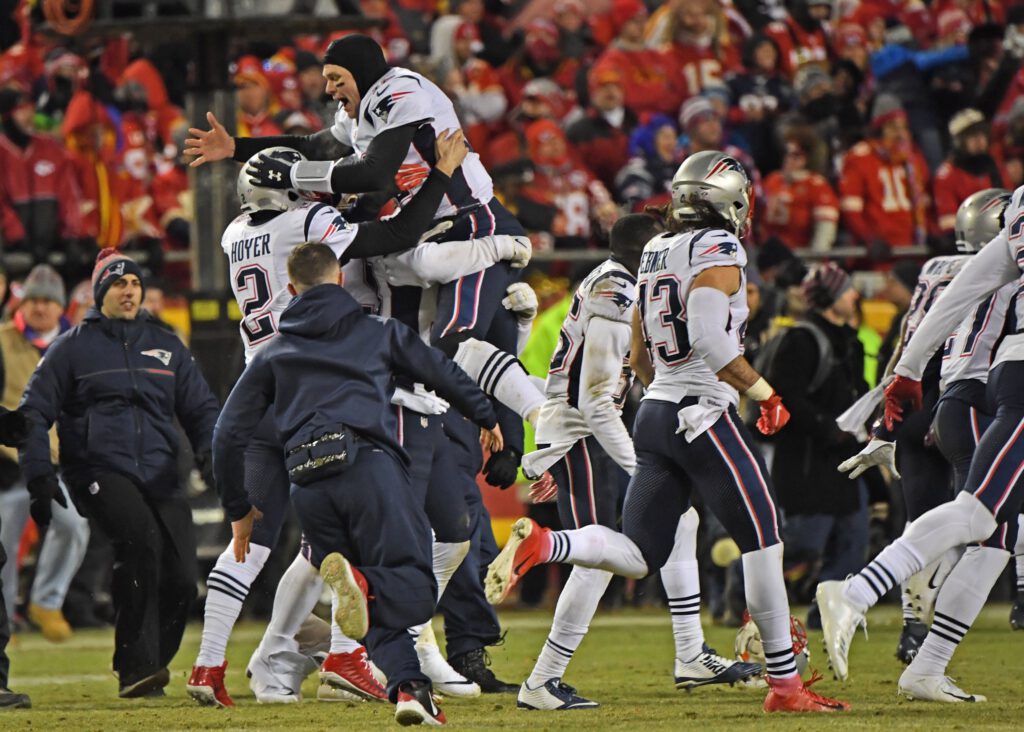 Below are a variety of advanced stats from the Patriots’ 37-31 win over the Kansas City Chiefs in the AFC Championship Game.

There were some bad moments from Brady in this one, and the traditional box score stats reflect that (77.1 passer rating), but he out-played Patrick Mahomes.

Piggybacking off his performance against the Chargers, Brady was once again decisive and precise throwing darts into the Kansas City night especially during the last 7:45 of regulation and overtime.

The now nine-time winner of the AFC Championship Game also helped erase the Chiefs pass rush with a blistering 2.23-second time to throw which speaks to his quick decision making and the receivers ability to separate early in the down.

By now, we’ve all season the floater to Gronkowski along the left sideline to set up the go-ahead touchdown at the end of the fourth quarter so here’s another tight-window throw to Gronk in OT.

On the play, the Patriots isolated Gronk once again on Chiefs safety Eric Berry at the top of the screen. Brady quickly reads the safety who turns inside and eyes Julian Edelman running out of the slot leaving the throwing lane open to Gronkowski on the slant. Brady fit the ball into tight coverage, and the ball placement doesn’t get any better than that.

Brady’s was only pressured seven times in the game, but he made some spectacular plays when the Chiefs pass rush did get home.

Here, the pocket is collapsing around Brady who somehow stands tall amidst the chaos and drops a dime on a back shoulder throw to running back James White. Credit to White as well for a terrific adjustment on the pass.

The completion to White sums up Brady’s night perfectly; with 80,000 screaming Chiefs fans in the stands, the Pats quarterback wasn’t fazed and threw for 147 yards leading New England on three scoring drives in crunch time to reach an NFL record ninth Super Bowl.

Against a Chiefs pass rush that led the league in sacks with a three-headed monster of Dee Ford, Justin Houston, and Chris Jones; Tom Brady was only pressured on seven of his 46 drop-backs (15.2 percent).

This, of course, following another masterful performance against Joey Bosa, Melvin Ingram and the Chargers in the Divisional Round (15.9 pressure rate).

What we are seeing these last two weeks is remarkable, and a perfect marriage of game plan and execution by the players on the field.

Coupled with a quick release by Brady, Scarnecchia and offensive coordinator Josh McDaniels devised a perfect game plan for slowing down the Chiefs rush.

When Brady needed time, the Pats chipped both Ford and Houston with Gronk on one side and a running back on the other to help out the tackles trusting the interior to hold up against Jones.

On this completion to Chris Hogan on the go-ahead TD drive, the Chiefs only rushed four, but both Gronk and James White chip the edges (Ford and Houston) before releasing downfield. However, the coordination and ability to play as a unit by the five offensive linemen is a work of art. The Chiefs try to run a game or stunt with Ford and Jones, and the left side of the OL pass off Jones perfectly while closing the interior leaving no space for Ford to sneak through. Shaq Mason wins his one-on-one with Allen Bailey, and Brady has a picnic back there before finding Chris Hogan for another first down.

The Patriots need one more dominant performance in the Super Bowl from the offensive line against Aaron Donald and company, but they’ve been flawless in the postseason so far.

The Patriots got their usual production out of the slot with 111 of Brady’s 348 yards coming from inside, but this was a rare game this season where Julian Edelman ran more routes on the perimeter than out of the lot.

However, Edelman was still productive with 38 of his team-leading 96 yards coming from inside as he dominated the matchup against the Chiefs top cornerback, Kendall Fuller.

On the go-ahead drive in the fourth quarter, Edelman motioned into the slot and ran a fantastic route to beat Fuller. As you can see, the pre-snap motion allows Edelman to run on a slant in his stem to gain leverage, and then he leans up against Fuller attacking the cornerbacks outside leverage before exploding over the middle at the top of the route. Plus, his fearlessness to go over the middle and take a shot from the safety is the kind of toughness that makes him Brady’s go-to target on third down.

Like last week, the Patriots also got a touchdown from wide receiver Phillip Dorsett with Dorsett running out of the slot thanks to a beautiful double move by the Pats wideout and a dime by Brady.

For the second week in a row, the Patriots won the line of scrimmage, and thus they won the game.

For the fourth time this season, the Patriots pressured an opposing quarterback on 50 percent or more of his drop-backs; Mahomes was under duress on 18 of his 36 drop-backs and sacked four times.

Not only did the Patriots pressure Mahomes, they also contained him and made it difficult for the soon-to-be league MVP to get out of the pocket to make those devastating downfield throws on the move.

The Patriots defense accomplished this with a great game plan, but most importantly, fantastic gap integrity by those rushing the passer.

Here, the Patriots ran one of their stunt schemes with Van Noy wrapping around the penetration of Adam Butler and Dont’a Hightower. Trey Flowers and Adrian Clayborn made it difficult for Mahomes to escape the pocket to the outside, and Van Noy came screaming through the center of the offensive line to take down the Chiefs quarterback.

Although the Chiefs offense woke up in the second half, the Patriots kept the pressure on Mahomes.

Lawrence Guy and John Simon combined here on what is a terrific example of the rush coordination from the Patriots defense. The Pats ran bookend tackle/end stunts with Guy wrapping around Hightower and Trey Flowers coming free around Simon’s successful bull rush. Flowers forces Mahomes to step up and the Patriots collapse the pocket around him not allowing him to escape.

Since their bye in Week 11, the Patriots defense is third in the NFL in pressure rate as they’ve found a pass rush in the second half of the season (43.1 percent, includes playoffs).

Once a weakness of the defense, the Patriots’ run defense held Chiefs running back Damien Williams to 30 yards on ten carries on Sunday night.

The Patriots set the tone early with their linebackers and defensive tackles making plays in the running game to deter the Chiefs from running the football.

On third and one in the second quarter, defensive tackle Malcom Brown made a dominant play pressing the center off of him with great arm extension, leverage, and power at the point of attack. Brown attacked a soft outside shoulder from the center, waited for the back to jump into the gap, and made the stop short of the sticks.

Although it technically goes down as a pass, Van Noy made a terrific play tackling Travis Kelce on a Chiefs staple: an option shovel pass off of jet motion.

Van Noy likely saw this play on tape from the Chiefs, and his eye discipline and immediate recognition of the shovel pass capped off by a great tackle on Kelce was a critical second-down play for the Patriots.

As we know, Mahomes and the Chiefs offense made its fair share of plays in the second half.

But the Patriots’ front and coverage forced him to make spectacular plays to beat them and limited the Chiefs big-play attack for most of the game.

In the secondary, the Patriots, as many including myself theorized before the game, took a chance and played man coverage in the secondary with safety Devin McCourty dedicated to shading over the top of Tyreek Hill.

It was a risky endeavor against such an explosive group of receivers, but it took the Chiefs by surprise and was the right move.

“They challenged us. They came up and played man. Not a lot of teams have this year. They put people in our face to see how we responded,” Chiefs quarterback Patrick Mahomes said.

The game plan centered around track stars Jonathan Jones and Keion Crossen following Tyreek Hill all over the field with McCourty protecting against the deep ball, JC Jackson matching up one-on-one with Travis Kelce, and Gilmore on an island with Sammy Watkins.

In crunch time, the Patriots switched Gilmore and Jackson putting their All-Pro corner on the Chiefs All-Pro tight end.

New England held the Chiefs duo to four catches on eight targets for 65 yards making this another game plan that belongs in the Bill Belichick Hall of Fame.

With Hill, the Patriots deployed arguably their two fastest players on their roster to run with the speedy wideout for most of the game.

The Van Noy sack above is a perfect example of the type of coverage the Patriots played to finally slow down a player that has killed them over the last two years.

Jones used a “trail’ technique against Hill allowing him to release at the line of scrimmage but then running underneath his route to take away anything going across the field or coming back to the quarterback. Then, McCourty ran over the top of Hill to deter Mahomes from throwing the deep ball to his game-breaking wideout.

Hill caught one pass for 42 yards, a tremendous accomplishment considering he had 275 yards and four touchdowns against New England in two career regular-season matchups.

As for Kelce, the Patriots shadowed him with a corner, mostly JC Jackson, and jammed him at the line of scrimmage knowing they had the speed advantage with a corner on a tight end.

On the play, the Patriots ran a cover-0 blitz with safety Devin McCourty pressuring Mahomes, but watch what happens over the middle. Gilmore plays with outside leverage on Kelce, and the Pats drop Trey Flowers into an underneath zone to give Gilmore support to the inside, and Mahomes essentially throws the ball away.

Although there wasn’t a dedicated double on Kelce often, the support from the linebackers between the numbers allowed Jackson and Gilmore to box in Kelce.

The Chiefs adjusted in the second half to the Patriots’ man-pressure schemes by running rub or pick plays and incorporating running back Damien Williams into the passing game.

But the Patriots secondary won their matchups across the board and forced Mahomes into hero mode in the Chiefs second-half comeback.